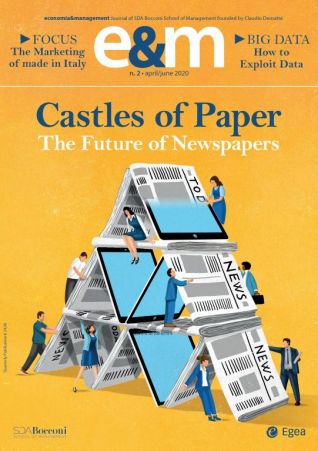 The Cost of Ignorance

The Origins of the Print Media Crisis

A Predictable Decline and the Strategy of Newspapers

When Publishers no Longer Believe in Publishing

The Triumph of Subjectivity (and of the Smartphone)

From the Newspaper to the Newsbrand: The View of Managers

Changing Jobs, between Expectations and Reality

Focus. Marketing Made in Italy Products

What It Means to Talk about Made in Italy

Cultural Specificity and Quality of Production

How and Why to Defend our Coolness

The Supply and Demand of Uniqueness

The Hidden Challenge of Digital Transformation

How to Draw Value from Data in the Post-Digital Era

The Renewer’s Dilemma in the Management of Collective Turnover

Negotiation: How Important is Cultural Background?

The Issue of Corporate Governance in Public Utilities

The Cost of Ignorance

Our low level of schooling in Italy inevitably reflects on the future of newspapers, above all from the standpoint of the demand represented by readers. Starting with the initial historical literacy gap compared to other nations, our country has always been at the bottom of the rankings in terms of the circulation of newspapers. Moreover, with the excuse of having to reckon with a certain type of public, there is a risk of offering lower quality products that instead of raising the profile, contribute to reinforcing exactly that type of demand. This is a vicious circle that it can become difficult to exit, and that cannot handle the competition of alternative, free media, such as television first, and internet afterwards.

Italy is at the bottom of the rankings in Europe as regards school abandonment. We are fourth from last, with a percentage of 14.5 percent, and still far from reaching the goal of 10 percent set for 2020. The only countries worse than us are Spain, Malta, and Romania.[1] This is not recent news, and like all other news, after having made the headlines of some newspapers for a few days, it then disappeared from the radar. It merits greater reflection, though, because behind the figures there are definitions and meanings that are often different, and that point to responsibilities and possible actions that are necessarily differentiated. First of all, we must distinguish between “school abandonment,” i.e. the number of youth under 25 who do not go beyond middle school, without obtaining additional diplomas or professional qualifications, and “school dispersion,” that regards leaving compulsory education early, before obtaining a diploma.

As regards compulsory education, according to the most recent data, dispersion in middle school is decreasing - in the 2016/2017 school year it was equal to .69 percent (corresponding to 11,830 students) compared to .8 percent (14,258 students) in the previous school year - and has a higher incidence among males (.77 percent compared to .59 percent for females), in the South (in Sicily, Calabria, and Campania in particular) and among foreigners (2.92 percent compared to .45 percent of Italians), especially those born abroad and coming from certain countries (in particular Ivory Coast, Bosnia, Egypt, and Bulgaria). In absolute values, however, it is important to stress that the regions of Northern Italy represent 33 percent of the total students who leave the school system and that foreign students are equal to 28 percent of the overall total (72 percent represents students who are Italian citizens).[2]

All of this has a significant economic and social cost, especially for the new generations and thus the future of the country. In addition to the cost of ignorance, we must add the cost of the “brain drain” which takes intelligence abroad. While the first can be traced to the failure of the state, that is unable to enforce laws on compulsory education and does not invest enough in the sector, the second is attributable to the failure of the internal market - and thus its businesses as well - to keep and offer opportunities to people educated through public resources. In this case, the brain drain actually highlights the success of the state, the ability to export the “products” and excellent results of its education and training system abroad, despite the presence of scarce resources. To lay the blame for Italy’s shortcomings on the state and the structure of our education model is not only simplistic, but not even intellectually honest. In addition to the costs of ignorance, we also need to avoid the costs of propaganda from those who oppose the state and then complain of its ineffectiveness, which they have contributed to create by limiting its resources.

The cost of ignorance also reflects on the future of newspapers – the subject of this issue – above all from the standpoint of the demand represented by readers. Starting with the initial historical gap in the literacy rate compared to other nations,[4] our country has always been at the bottom of the rankings in terms of the circulation of newspapers. In 1990, the year in which the peak number of copies were sold, Italy was in one of the lowest positions in Europe (119 copies per 1,000 inhabitants). Only Greece, just a little behind (116 copies), and Spain (83 copies) were worse than us, although Spain would pass us in 1995.[5] The persistence of an education gap with other nations is thus not a positive sign in a market of readers that has traditionally been weaker. Yet the cost of ignorance also reflects on the quality of supply. With the excuse of having to adapt to the existing public, there is a risk of offering lower quality products that instead of raising the profile, contribute to reinforcing precisely that type of demand. This is a vicious circle from which it becomes hard to exit, and that cannot handle the competition of alternative, free media, such as television first, and internet afterwards.

In addition to having further accentuated this phenomenon, the explosion of internet has also highlighted some important differences with respect to what has taken place in other sectors. In most cases, the web has in fact allowed for the birth and entry of new subjects (think of Amazon, Uber, or Airbnb) that have created strong competitive pressure for traditional subjects. In the case of newspapers, this has not taken place. Initially, no new subjects arose that competed with existing newspapers. There were not even the phenomena of piracy that had heavily affected sectors such as music first, and movies later. Rather, the strongest, consolidated newspapers, searching for larger advertising markets, decided to change their economic model by freely offering what previously had been provided only for payment. They then discovered that this way, they had essentially threatened their own survival. In this case as well, ignorance – understood as the inability to assess risks, and the overestimation of opportunities – had a cost. Understanding what will happen in the future is important for all of us both as citizens, because newspapers have always played a fundamental role in the formation of public opinion, and for those who operate in businesses and find themselves faced with similar scenarios and dilemmas. How newspapers face their future can indeed provide a useful lesson, whether it represents a case to imitate, or an example to avoid. Enjoy reading!

Education and training in the EU - facts and figures, Eurostat, 2019: https://ec.europa.eu/eurostat/statistics-explained/index.php/Education_and_training_in_the_EU_-_%20facts_and_figures. 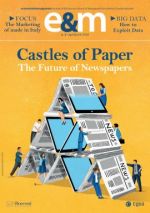 A Predictable Decline and the Strategy ...