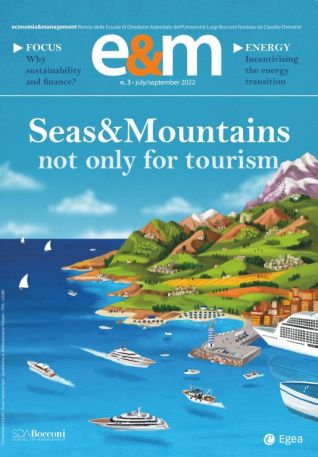 The Second Life of the Metaverse

Technology and Sustainability Take a Cruise

Tradition and Innovation for Luxury Boating

Threats and Opportunities for the Fishing Industry

The City Needs the Mountains

The Great Challenge of Milan-Cortina

How to Extract Value from Governance

Sustainable Finance. Why It Has to Change

ESG Rating and Credit: How to Assess Integrated Risk

The Impact of Sustainability on the Cost of Capital

Accelerating the Transition: Financial Services Must Also Do Their Part

The Creation of Value through Sustainable Debt Instruments

Carbon Prices and Markets: The Solution to Climate Change?

The Minority Market in Private Equity and Italian SMEs

Work Hard and Have Fun … in an Amazon Warehouse

The Second Life of the Metaverse

The metaverse represents the most advanced and sophisticated of current social media, a space of interaction and transaction populated by individuals and businesses/organizations. The fact that in the metaverse there are ample opportunities for business exploitation demonstrates that its realization could truly be “just around the corner.” Turning this corner, though, means facing scenarios that are just as disquieting. The metaverse has the same dangers and criticalities of current social media: the gradual removal of private spaces for interaction from the public sphere and control. But there is an additional, more serious risk: unlike physical reality, life in the metaverse is for payment. That is, we can exist in the metaverse if we pay, or if someone pays for us. Those who cannot afford to pay do not exist, and thus it is business that pays for us, and as those who know and operate in the media know well, we ourselves are the products that are sold.

The term metaverse, coined by the writer Neal Stephenson in the 1992 book Snow Crash, was born conceptually in cyberpunk culture and originally described “a computer-generated universe that’s drawing onto his goggles and pumping into his earphones.” It is an immersive virtual reality shared through internet, in which the avatars that enter it interact with the other people and digital objects found in these spaces. The first, most famous attempt to create this universe was that of the Second Life platform in 2003. Even though it lacked an immersive perception, Second Life already contained many of the characteristics of the metaverse; the presence of avatars associated with the users connected, the existence of virtual spaces for interaction, some of them produced by businesses (IBM, for example) and organizations (among these, various universities and embassies), and finally, the use of virtual currency as a currency of exchange.

Despite the attention generated and the initial growth that ensued, Second Life did not become a mass tool comparable to current social media. The metaverse project thus seemed to have been abandoned, and remained in the background for various years; until Facebook brought it back again in 2021, when the largest social media company in the world decided to enter a reference to the metaverse in its name, thus indicating not only a new identity but also its mission. Facebook’s announcement was then followed by those of Microsoft,[1] Google, and Apple.[2] Since the big global players have taken the field, it makes sense to ask if this new phase can in fact be considered the start of a second life for the metaverse and its applications.

The development of the metaverse fits into the logic of capitalism that Marx and Engels had already acutely described in their Manifesto: the logic of capital is necessarily based on its growth (“it must nestle everywhere, settle everywhere, establish connections everywhere”) and this means that, together with the more intense exploitation of old markets, capital requires the conquest of new ones. The need for an increasingly extensive market for its products thus pushes capitalism to cross the globe, and once the possibilities for further expansion are exhausted, to turn to new real worlds not yet exploited (such as the commercialization of space flight, with the goal of settling new planets) or virtual universes to be created ex novo, precisely such as the metaverse and the related market opportunities.

The metaverse in fact represents the most advanced and sophisticated version of current social media, a space of interaction and transaction populated by individuals and businesses/organizations. Similar to social media, we will find ourselves facing an environment managed by single private businesses that, in addition to controlling access and behavior by the users, also define them in economic terms (those who pay have access). Currently, social media are financed through advertising and thus the single users have free access. Unlike social media, though, that are based on the production, exchange, and consumption of various forms of content (posts, images, videos), the metaverse represents a virtual physical space populated by digital objects and avatars in which the users move and with which they interact.

Managing the metaverse thus means managing that space, and like any real place, it is subject to real estate expansion, in which builders can construct private roads, houses, stores, shopping centers, businesses, parks or special places which have no equivalent in our reality. The only difference is that none of these things have been physically built. As described in Stephenson’s novel, they are graphic representations (user interfaces) and a myriad of different softwares, designed by engineers of those companies that, “in order to put all this stuff in the metaverse, they had to wait for the approval of the company that controls it, which finances its development and the upgrading of the machinery and software necessary for its existence, buy building land, obtain a change in the zoning plan, apply for permits, bribe inspectors... - in short, the usual rigmarole”.

Despite the similarity of the economic processes and logics, some advantages of the metaverse with respect to physical reality are evident. For final users there is in fact the possibility to remotely access immersive virtual spaces that allow for performing some activities with a much higher level of interaction and participation than current systems of remote collaboration or current online shopping models. Think of virtual meetings in which the participants seem to be sitting around the same table, of consumers who can have the sensation of touching products in virtual stores or trying on some clothes,[3] users who can follow concerts, shows, or sports events feeling like they are in the stadiums or theaters. The applications are countless.

The benefits for businesses are also undeniable. The costs linked to physical presence – think of offices or points of sale – can in fact be considerably reduced or eliminated. The virtual world also offers the possibility to market digital objects for users. Similar to current videogames, in which players can purchase the tools necessary to pass different levels, in the metaverse as well the users can decide to purchase digital objects for their avatars or for their private spaces. Being present in the metaverse means being able to have a second life or a second home, and this stimulates demand for other digital goods, that are additional and complementary to real physical goods, and that over time, and in the event the second home becomes one’s main home, can substitute the real goods.

The fact that there are ample opportunities for commercial exploitation in the metaverse and that they have been recognized by various large brands and companies that have decided to invest there, demonstrates that its realization could truly be “just around the corner.” Turning this corner, though, means facing scenarios that are just as disquieting. The metaverse has the same dangers and criticalities of current social media: the gradual removal from the public sphere and public control of private spaces for interaction, that escape the laws and regulations of the state. But there is an additional, more serious risk: unlike physical reality, life in the metaverse is for payment. That is, we can exist in the metaverse if we pay, or if someone pays for us. Those who cannot afford to pay do not exist, and thus it is business that pays for us, and as those who know and operate in the media know well, we ourselves are the products that are sold.

Considering these different perspectives together, the metaverse can be considered a hyperobject. Timothy Morton uses the term “hyperobjects” to designate entities of such vast temporal and spatial dimensions that they defeat traditional ideas about what a thing is in the first place (the most dramatic example is unquestionably global warming), dragging us into a dimension that is at the same time strange and disquieting.[4] For Morton hyperobjects are directly responsible for what he defines as the end of the world, and it is no coincidence that in the epigraph of his book he quotes the famous sentence by the physicist Oppenheimer after the explosion of the first atomic bomb: “Now I become Death, the destroyer of worlds.” But is this not the spirit of capitalism already highlighted by Marx, in which “national industries have been destroyed or are daily being destroyed. They are dislodged by new industries, whose introduction becomes a life and death question for all civilized nations”? And is this not the same creative destruction celebrated by Schumpeter? We will see if and how much the real developments of the metaverse make the traits just deformed recognizable. The good news is that the metaverse seems to be closer this time. The bad news is that we are not far from it.

The dossier in this number is dedicated to the seas and mountains and the enterprises linked to them. For Italy these are not only two fundamental elements of our landscape, as Giuseppe Mazzini recalled (“the two most sublime frontiers in Europe, symbols of eternal strength and eternal motion, the Alps and the sea”), but also of important sectors, where complex dynamics of economic exploitation and preservation of the environment are interwoven and require particular attention, patience, and responsibility. These are also some of the values that inspire the new REPAiR Lab of SDA Bocconi – to which the focus in this issue is dedicated – in which finance is not confined only to a world of hardware and software, but must look at the real world, the “world out there,” that, despite the promises of the metaverse, still exists/resists. Enjoy reading!

“The Metaverse is Coming. Here are the Cornerstones for Securing it”, Official Microsoft Blog, March 28, 2022.

“The Metaverse Set Off a Battle Between Tech Giants Google, Apple, Microsoft and Meta to Build Virtual and Augmented Reality Headsets”, Forbes, January 21, 2022.

See T. Morton, Hyperobjects, Minneapolis, University of Minnesota Press, 2013. (It. trans., Iperoggetti, Rome, Nero Editions, 2018). Iperoggetti represents one of the foundational texts of so-called Object Oriented Ontology or OOO, one of the most influential currents in contemporary philosophy. 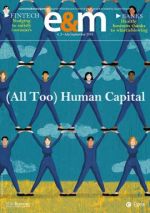