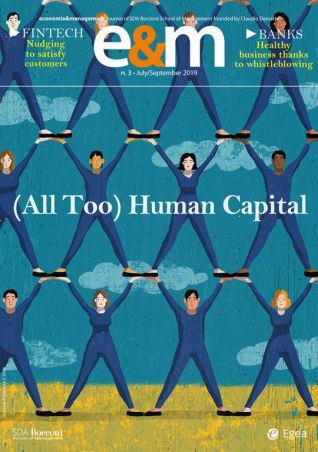 This dossier is dedicated to work, and more specifically to workers in businesses and organizations in a broad sense. “Workers” is an almost outdated term that, similar to what happened with “laborers,” is now disappearing from the managerial vocabulary. In its place people speak of “human resources” and “human capital,” and no longer of “employees” but “associates.” Yet we are not faced with a simple linguistic change, but rather an epistemological break that reflects a profound transformation that has occurred in businesses and in the processes that govern the selection and access of workers to organizations, their career paths, and their departures.

That transformation took place in a context of obsessive attention to adaptation, change, and flexibility, with a variety of managerial innovations that we can attempt to classify using certain key ideas: streamlined companies that work in a network with multiple subjects and work organized in teams or projects, oriented to results and customer satisfaction, in which more than through rules and hierarchy, the general mobilization of human resources becomes essential, thanks to the overall view of their leaders.

The orientation towards single projects, and the attainment of the respective goals, appears to have the advantage of offering clear and reliable criteria for measuring performance, on which to base the organization of careers. This means not working with “subjective criteria,” which would open the doors to nepotism and favoritism, but using an “impersonal judgment” based on so-called “meritocracy”[1] that rewards those who reach goals; this removes the link to seniority, which rewards loyalty, but also rigidity.

In this scenario, a career is more than a progression of projects, in which people move from one project to the next, and the success of a given initiative allows them to participate in other, more interesting ones. Each project, being an opportunity for multiple encounters, offers the possibility to be appreciated and thus makes it more likely one will be called on for another position. Since by definition each project is different, new, and innovative, it represents an opportunity to learn and enrich one's knowledge, thus acquiring additional resources to find other engagements.[2] This is where we understand the change in language from “human resources” to “human capital,” i.e. from subjects who are no longer considered passively as productive resources to be exploited or to recombine in new planning configurations, but as active subjects who are constantly forced to accumulate skills, lest they be devalued or excluded.

This is a process of accumulation in which the skills required are increasingly based on “knowing how to be,” and not only “knowing” or “knowing how to do;” that is, people are asked to focus on the affective and relational dimensions (known as soft skills) and to provide businesses not only with technical abilities, but also with their skills, including at a personal level, such as the sense of friendship or emotions. This is a process of accumulation that is not only incessant and unending, but also borderless.

In a world without borders, in which businesses are increasingly informal and virtual, in which hierarchical constraints are diminished and the institution no longer shows its presence through tangible signs and symbols of power, how is the loyalty of workers guaranteed? The risk of a flexible organization in fact lies in the greater ease for actors within the business to play their own game, pursuing their personal interests without taking into account all of the other people who have given a fundamental contribution allowing their actions to be crowned by success.

In the case of work, we also increasingly find ourselves faced with a situation in which the salaries paid by companies tend not to be linked with the costs and investments necessary for the development of this new class of workers, both upstream (education, training, and retention during periods of inactivity and rest) and downstream (reconstitution of forces, burn out, and ageing), without counting the negative effects of the intensification of work on physical and mental health. That is, there are costs that are not fully covered by companies, but that are sustained by the workers themselves and by society as a whole.

The issue of work in businesses constantly re-proposes the problem of the difficult balance between the well-being of the individual and the pursuit of organizational rationality, in terms of efficacy and efficiency. The search for organizational efficiency, although unavoidable, has costs in terms of human happiness, and the problems of measuring efficacy and efficiency entail such counterproductive effects that the problems become intrinsically irresolvable, or give rise only to partial, momentary solutions.[3] Regardless of the fact that a business should not necessarily represent the principal, all-absorbing environment in which individual happiness is to be sought,[4] it is not true that whatever increases rationality must necessarily be the cause of unhappiness, and it is not true that everything which increases happiness must produce inefficiency. In each organization there is a point in which this relationship ceases to be valid; not all work performed can be compensated or in any event gratifying. For some, the solution is to substitute current human capital, that is still too human, with automation. But this is also a partial response. The human component – whatever dimension it will have in the future – should never be considered a simple attribute of capital. The risk is to see workers as capital that is too little human. It’s a challenge, not only for businesses.

di Pulignano Valeria Trade unions in Italy are currently facing certain critical problems that derive from the exhaustion of the previous phase of industrial relations, based on policies of consultation with employers’ ...