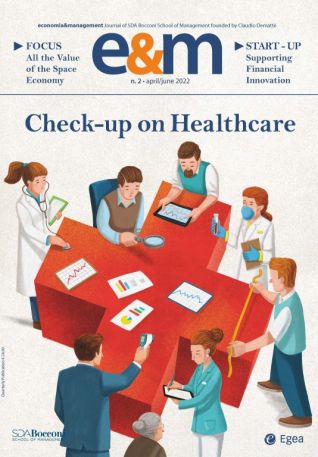 Dossier. Lessons from the Covid-19 era

The Four Eras of the SSN in Two Years

Operations management as a Critical Factor

The Great Challenge of Personnel

The Contribution of Private Operators

How the Supply Chain Has Changed

The Impact of the PNRR on Care

Generating value with purchases and investments

Focus. All the Value of the Space economy

All the Value of the Space Economy

The importance of the public-private relationship

Why and how to reduce the large amount of space debris

To the Moon for Interplanetary Exploration?

Project Management between the Past, Present, and Future

High-Impact Leadership: The (Hidden) Power of the Relationship

Measuring to Improve Performance in the Italian PA

Benchmarking represents one of the most common management tools used by businesses. It is an extremely complex and detailed process that involves some important elements of decision-making: identifying the outside group for comparison; gathering information on that group’s practices; and choosing which among these practices are advisable/feasible to adopt internally, and how. A benchmarking analysis must be conducted with great care, but at the same time, it is important to avoid excessive attention in its use. The risk is to give too much importance to what others do, and consider the outside context as the only source, or the most important one, on which to draw.

Benchmarking represents one of the most common management tools used by businesses.[1] As unfortunately happens for many tools and models of strategy, where as time passes from their introduction the awareness of their complexity declines, with the risk of using gradually simplified versions that are different from the original, the same has happened with benchmarking analysis. Introduced at the end of the 1970s by Xerox Corporation with the aim of recovering the competitiveness lost in regard to its Japanese competitors, benchmarking is based on a comparison between the company’s internal processes and those of the best businesses/organizations in certain sectors, and on the subsequent adoption of the best external practices identified.[2] It is an extremely complex and detailed process that involves some important elements of decision-making: a) identifying the external group for comparison; b) gathering information on that group’s practices; and c) choosing which among these practices are advisable/feasible to adopt internally, and how. Each of these passages is particularly delicate and requires specific attention, not only because the choices made in each phase condition the subsequent phases, but also because they are based on assumptions that are often not explicit, but which limit the results of the overall analysis, and thus need to be recognized.

The first important assumption is that best practices are present in the best companies. To identify those practices is it thus necessary to start with the best entities and then analyze them. That is, the external comparison group, whether limited to competitors or extended to companies belonging to other sectors, is based on a ranking in terms of a specific measure of overall performance (for example, market share or profitability). Within that ranking the entities are identified that are at the top of the list, and then certain specific practices are analyzed, comparing them with the company’s internal practices. If it is decided to use only competitors in the reference group, in addition to the difficulty of obtaining detailed information on their practices, the result is often limited to the reduction of a gap or reaching a situation of operational parity, but not achieving a strategic advantage. If it is decided to include in the reference group companies belonging to other sectors, the exchange of information can be facilitated by the absence of mutual competition. This entails the risk, however, of examining situations that are so distant that it becomes difficult to adopt their practices or achieve the same results.

These two situations, despite being opposite, should not be considered as equidistant. If the goal of benchmarking is to obtain a competitive advantage with respect to competitors, the comparison group should include entities belonging to other sectors, so as to adopt innovative practices not yet exploited in the company’s own sector. In benchmarking analysis, this set is often identified as the “group of peers” though, limited not only to competitors, but selecting those competitors that are similar or close to the company, also in terms of performance. The analysis is thus reduced to a single need (to know what competitors are doing) and to a dangerous and simplistic conclusion (if most of our peers adopt similar practices, then we should adopt them, too). In this process, not only is the original aim of benchmarking analysis lost, but the logic of the results obtained is lost as well. Choosing to adopt a practice only because it is widespread does not in fact mean adopting the best practice.

The other critical aspect, once identified, regards the internal adoption of that practice. It is often not a simple “paste and cut” operation regarding independent elements, but true organizational “transplants” that require time and resources, and if not executed carefully, can generate a crisis of rejection. A recent documentary on the acquisition of an American factory by a Chinese multinational corporation provides an indicative example. In this case, the attempt to transfer to the United States the same practices adopted by the company in its Chinese factories turned out to be a failure.[3] The error consists of considering one practice independent of other elements in which it is located – both the company and the context – thinking that it can be injected into a new entity to thus obtain the same performance, even if the other elements from which it was extracted are lacking. In benchmarking analysis, instead of an organic vision, a mechanistic vision often prevails, that is even more dangerous at the moment in which the comparison group includes companies belonging to different national and cultural contexts. But precisely because the predominant approach is based on competitors and competition is often at the global level, that phenomenon and the consequent risk are frequent.

Benchmarking analysis thus requires great attention in being carried out, but at the same time, it is also necessary to avoid dedicating too much attention to its use. The risk is in fact to give too much importance to what others do and to consider the outside context as the only source, or the most important one, from which to draw. Benchmarking analysis meets the company’s goal to improve in order to respond in the most effective and efficient manner to satisfy demand from its consumers and clients, and from its stakeholders in general. There is a consolidated vision in economics that considers competition the primary, or even the only driver of such progress. According to this approach, it is competition with outside subjects that creates mechanisms of innovation and mutual imitation. That vision, however, often forgets that the drive for innovation and improvement can come from the inside, from the simple desire to try to do something better without any outside pressure. More than a challenge with others, this can be a challenge with ourselves, that exists or should exist even in the absence of competition. The danger of using benchmarking analysis exclusively, or as the primary tool, is the atrophization of companies’ capacity to respond internally, and the risk of generating an automatic reflex of needing to look outside of the company first. Over time, the company will be trained to imitate more than to think independently. This does not mean that businesses should give up on learning from the experiences of other businesses. It is important to have outside examples as references. Often, though, examples are not sought, but found. That is, they are the result of being attentive to what goes on outside, in a broad, not focused sense. The risk of seeking examples systematically and obsessively is that of losing oneself.

The dossier in this issue is dedicated to the management of healthcare. In this case as well, it is an area in which comparison with other countries and benchmarking analysis are frequent, especially in these past two years of the pandemic. In fact, every day we found ourselves comparing our situation and the performance of our healthcare system with that of other nations. Covid-19 showed not only the importance the healthcare system, but also that its performance – and in the case of the pandemic this meant the difference between life and death of patients – depends not only on the quality and effort of doctors, nurses, and all healthcare personnel, but on their organization and the proper management of resources. In some cases and at some times the system performed excellently, while in others there were evident limits and deficiencies. To re-design the future, we must start from both components and learn from them. Enjoy reading! 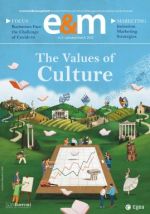 Listening to the Silence: Reflections ...

di Perretti Fabrizio What are the almost 4 million workers who have decided to leave their jobs in the United States since July 2021 fleeing from? From situations of unease, toxic work environments, absurd working hours, ...