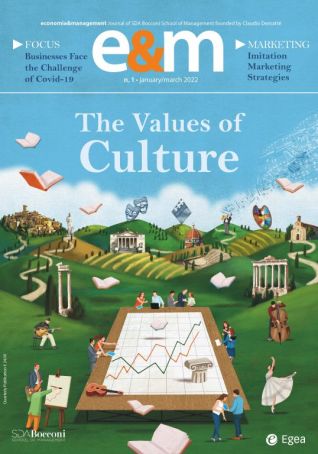 Listening to the Silence: Reflections on the Great Resignation

The Values of Culture

Strength and Fragility of Reading

The Proximity of Libraries

The Digital Transition of Museums

New Experiences of Consumption The Case of the FAI

The Impact of NFTs on the Art World

Dossier. The 2030 Agenda and Local Territories

Capitals of Culture: Experimenting with the Future

Digital Nomadism as an Opportunity for Tourism

The Regeneration of the Venetian Lazarettos

Resistance and Revival of Italian Businesses

The Reaction to the Shock, Defined by Change

The Strength of the Example of the Italian Manufacturing System

The New Logics and Growth Trajectories of Powered Advertising

Creativity in Businesses, between Myths and Good Managerial Practices

Work and Institutions in the Global Fast Fashion Market

Listening to the Silence: Reflections on the Great Resignation

What are the almost 4 million workers who have decided to leave their jobs in the United States since July 2021 fleeing from? From situations of unease, toxic work environments, absurd working hours, and conditions of burnout, i.e. emotional, physical, and mental exhaustion. It is as if the pandemic has shown that the jobs considered to be desirable were actually not as gratifying as they seemed or had been presented or we wanted to deceive ourselves that they were. The Great Resignation, that does not regard only workers with lower salaries and less comfortable working conditions, but is also involving medium-level workers, derives from a push-type logic, of those who are pushed out of a situation of discontent and flee towards the exit. Businesses do not emerge from this situation well, either because they are not as attractive as we imagined in retaining their employees, or because they discover that they have disappointing work environments that people wish to abandon.

In the United States it has been baptized the Great Resignation or the Big Quit. It's the great wave of resignations from work that, starting in the month of July 2021, has exceeded the level of 4 million people a month,[1] and which is also running through Europe, and especially Germany and the United Kingdom, although to a lesser extent.[2] The interesting thing is that it does not regard only the workers belonging to sectors hit hardest by the pandemic (such as hotels, restaurants, or stores), or more in general, low-salary workers with less comfortable working conditions, but is also involving medium-level workers, including in the most advanced sectors,[3] in Italy as well.[4]

This phenomenon could be included in what Hirschman has called the “exit” option.[5] Exit, together with the “voice” option, in fact represents one of the two alternatives that indicate the poor functioning of an organization and the relative discomfort and discontent of those who exercise them. In general, especially in the case of workers, it involves sequential options: those who are not satisfied first communicate their condition to those who could potentially remedy it (the employer or a union), to then possibly continue with actions of protest or strikes, and ultimately – if the “voice” option has not worked – can consider interrupting the employment relationship, resigning and thus adopting the “exit” option. In this case, the option is practicable, though, if alternatives for employment exist. If so, it is not even necessary to preliminary exercise the “voice” option. If alternatives are lacking, on the other hand, that option becomes the only one available to pursue.

If we interpret the wave of resignations from this standpoint, at the moment government interventions supported the income of some workers when their work activities were interrupted, the workers – once the pandemic eased and activity resumed – however decided not to return to their previous jobs. Given the alternative of a guaranteed income many decided to exit the world of work. But this is a reductive interpretation, that leaves out – at least partially – one part of the phenomenon. And in any case it indicates that many job positions, beyond the rhetoric of work as an essential component of our person and an opportunity for human and professional growth, are actually the result of a forced choice, one that is abandoned without hesitation once there is the possibility to do so.

Yet when those who leave their jobs are no longer the most disadvantaged workers in terms of salary or working conditions, but those who occupy positions that are apparently better and in more advanced sectors, the perspective changes radically. Often, these are people who decide to quite without yet having certain prospects for their future, without a new job ready to substitute the previous one. Naturally, these are people who can afford such a choice. They can rely on their savings, at least for a certain period of time, or they are even willing to accept a reduction of their income in exchange for better working conditions, able to meet their family and private life needs. According to many observers, the pandemic has changed our priorities, and those choices are the result of people who have decided for the carpe diem and Yolo (“You Only Live Once”) economy. Since you only live once, the propensity for risk has increased, along with the tendency to seek new, more gratifying work, or a new, more satisfying work/free time balance.

Yet this is a justification that we could define as of a “pull” nature: I see the possibility of something new, better, that attracts me and I try to achieve it. So the pandemic has allowed us to see new possible worlds, which we didn’t suspect existed, or that we had never been able to experiment with. So more than a Great Resignation, we are seeing a Great Reshuffle – as defined by LinkedIn CEO Ryan Roslansky – a shuffling of the cards with the hope of drawing a better hand.[6]  But what if this didn’t explain everything? Many people who quit leave a job that they don’t like.[7] They don’t want to move from a positive position to another more advantageous position, but abandon a negative situation. More than a reshuffle, we could be seeing a flight, also in the case of less disadvantaged workers. What are they fleeing from? From situations of unease, toxic work environments, absurd working hours, and conditions of burnout, i.e. emotional, physical, and mental exhaustion. It is as if the pandemic has shown that the jobs considered to be desirable were actually not as gratifying as they seemed or had been presented or we wanted to deceive ourselves that they were. So the pandemic has opened many people’s eyes, in a sort of collective reawakening from a dream that had turned into a nightmare. In this view, the Great Resignation derives from a push-type logic, of those who are pushed out of a situation of discontent and flee towards the exit. In one case or the other (push or pull), businesses do not emerge from this situation well, either because they are not as attractive as we imagined in retaining their employees, or because they discover that they have disappointing work environments that people wish to abandon.

In both cases, the pandemic has played a crucial role, but we should avoid using it as a deus ex machina. More than the cause, it has probably been the spark that has triggered the fire. But a fire only develops if it finds suitable ground and combustible material that has accumulated over time. If these situations were already present before the pandemic, how come they didn’t emerge? In theory, the “voice” option should have been able to recognize these signals. The paradox is that, with respect to work based on labor, for jobs based on intellect this option is just as limited. These are in fact categories of jobs who are traditionally and structurally less unionized, where workers often cannot but rely on the tools that their businesses make available to them (for example, work environment surveys) , where present. But these are tools that detect a shared need only as a sum of individual positions, within a system that often rewards, celebrates, and incentivizes reaching results, and thus inevitably the working conditions underlying it. It is interesting, in fact, that the phenomenon of resignation has occurred more in more advanced nations, with higher levels of productivity. Thus we discover that the highly exalted notion of productivity can have a very high cost, forgetting that, in this case as well, there is no such thing as a free lunch.

The wave of resignations was thus preceded in many businesses by a prolonged internal silence. And it is precisely due to this silence that those same businesses – that now must deal with a lack of workers willing to return – have been caught off guard. Because in the absence of voice, they interpreted the silence as a sign of loyalty in their regard. And as often happens, there is a focus on a noisy minority, perhaps trying to silence it, instead of concentrating on a silent majority, which should be given a greater voice.

The dossier in this number is dedicated to culture and to the businesses and organizations that manage it. Cultural goods represent a fundamental heritage, especially for a country like ours, that is so rich in it. To preserve that heritage, though, it needs to be managed correctly, finding a balance between the resources required and the ability to obtain them, between the need to preserve and protect the heritage, and at the same time to make it usable and accessible. This is a difficult challenge, that the articles of this dosser will attempt to illustrate providing some tools and examples that can be useful for the undertaking. Enjoy reading!

I. Cook, “Who Is Driving the Great Resignation?”, Harvard Business Review, September 15, 2021.

“What Quitters Understand About the Job Market”, The Atlantic, June 21, 2021. 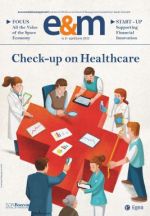 di Perretti Fabrizio Benchmarking represents one of the most common management tools used by businesses. It is an extremely complex and detailed process that involves some important elements of decision-making: identifying ...