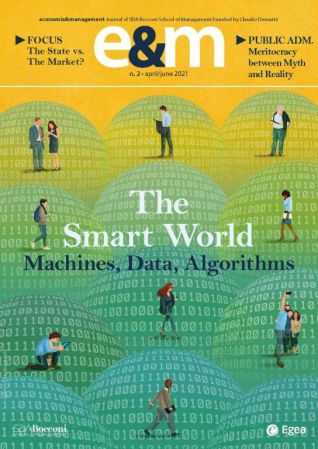 How to Create Value with the Data Economy

Innovation and Algorithms, To Be Managed with Care

The Reason of Optimism in Italy

Challenges and Solutions for the Banking Sector

Skills, Ethics, and Safety in the Service of Health

The Benefits of Algorithms in Business Organization

Data Scientists: Who They Are, What They Do, and How They Do It

Focus. The State vs. The Market?

Nationalizations and Privatizations from a Historical Perspective

The Bumpy Road of the Exit from the Mixed Economy

Banks and Markets: Why They are Tools of Economic Policy

Training in Companies is Increasingly Attractive

The Management of Financial Risks in Private Equity Funds

Public Administration and Meritocracy between Myth and Reality

The Italian Automotive Sector between Innovation and Business Networks

Italy-China Cooperation: Analysis of a Case of Stakeholder Management

Sensors, algorithms, and the capacity to store and analyze data: these are the three characteristics of the reality in which we are immersed. In this context, dominated by AI, businesses and organizations – in a broad sense – are exploring and using the many advantages and benefits that these tools offer: from the more accurate estimation of the demand for some goods or services (from transport to health, to the sale of products) to a greater coordination of the related activities; all to the benefit of end customers and consumers. Yet there is no lack of risks and criticalities.

When we reflect on artificial intelligence – as we are doing in the Dossier of this issue – it is useful to recall one of the most famous figures in the history of film: HAL in 2001: A Space Odyssey, Stanley Kubrick's masterpiece and cult film. More than an odyssey in space, though, the film tells of a voyage in time – from primitive man to the man of the future – in which intelligence is the true protagonist, and in which HAL (an abbreviation whose letters precede the well-known brand IBM) is more than a computer in a traditional sense, but is the subject that actually controls the spaceship, monitors the vital parameters of the passengers he transports into space, and interacts with them as if he were a true member of the crew, although virtual and artificial.

Just as the group of primitive men in the initial scenes of the film are able to predict and anticipate the behavior of their prey, through his algorithms HAL is able to foresee the future and predict the malfunctioning of a component of the spaceship, making it possible to replace it before the malfunction takes place. And just as the primitive men kill their fellow man when they feel threatened, HAL attempts to kill the other members of the crew when they decide to deactivate him, succeeding in almost all cases. Unlike primitive or modern men, though, HAL's intelligence is more sophisticated and able to collect and process much more data, not only that coming from the technical instruments, but also that relating to people's behavior. HAL is in fact a pervasive presence that observes what people do and anticipates their desires and related actions. The red lens of HAL's camera is the image that identifies him and recalls a sort of Orwellian Big Brother: a pervasive system in which everything and everyone is constantly under control. How much of these works of fiction can be found in the real world – whether human or artificial – in which we currently live and operate? A lot, and certainly more than what we might initially imagine.

We are in fact immersed in a reality surrounded by sensors (whether they are computers, tablets, smartwatches, appliances, cameras, etc.) that collect an immense quantity of data at every level of the surrounding environment, whether it is natural, artificial, or human. The data is of different kinds, but it can be collected and analyzed with a single purpose: to predict the future of the persons/systems from which it is extracted. Whether there is a need to make weather forecasts based on the data gathered by satellite images and the numerous weather units, or to predict the purchasing behavior of a person based on past behavior or personal information gathered on social media, the principle is the same. And in order for the predictions to be increasingly reliable, it is necessary to increase the number of sensors, so as to collect the most possible data (big data) and use systems of equations (algorithms) able to analyze the data and predict the future.

Sensors, algorithms, and the ability to store and analyze data, these are the three characteristics that explain why weather forecasts are more accurate and reliable today than in the past.[1] In recent years the same principle of observing the atmosphere has been applied to predicting human behavior. In the case of meteorology, the forecast presents unquestioned benefits for a series of activities by the public – from agriculture to transport – and is able not only to better manage resources, but to reduce damage and save human lives. Weather forecasts can only predict the future, though, not change its outcome, despite the attempts to do so, that have met with very limited success. In the case of their application to people, predictions can also have unquestioned benefits: for example, the demand for certain goods or services can be estimated (from transport to health, to the sale of products) and the related activities and management of resources can be better coordinated, with greater satisfaction of users and limiting the damage deriving from waste and inefficiency. Yet there is no guarantee that this will necessarily translate into universal collective benefits. Some may in fact take advantage of artificial intelligence to the detriment of others. In China, for example, home delivery services based on apps in which deadlines are dictated by algorithms and internal fines in the event of delays are pushing riders to drive dangerously, thus increasing the number of accidents in which they are involved and jeopardizing their physical well-being, and that of other drivers and pedestrians more in general.[2]

Unlike weather forecasts, human behavior can in fact be modified and influenced. It is certainly not new that businesses have always used a variety of methods to condition the purchasing preferences and decisions of consumers. Advertising is one of these methods, and perhaps the most traditional one. Artificial intelligence and big data have however increased the pervasiveness of that phenomenon to the point that each single public and explicit action of ours (for example, posting content on social media) or each private and implicit action (such as browsing a site in which cookies record our activity or entering a physical location – a room of our home or a shop in the city – in which the sensors in our smartwatches, appliances, or voice assistants record our movements), corresponds to a flow of information that is extracted and used to channel messages that aim to influence our thinking and behavior.

Isn't a custom product or service ultimately the most advanced stage of customer/user satisfaction? As described in the various contributions that you will find in the Dossier, in this ultra-personalized reality that businesses and organizations are exploring and using in a broad sense, there are certainly many advantages and benefits for their target population; but there are also many risks and criticalities. As Kubrick's film reminds us, intelligence – even when it is artificial – is often associated with violent phenomena, that needn't be understood only physically. The end of Orwell's book, in which the protagonist is not only convinced that that 2+2=5 but also that he loves Big Brother, is in fact extremely violent. By a strange coincidence, two dates (1984 and 2001) are the titles that are extremely relevant today for those who deal with big data, algorithms, and artificial intelligence, and after having read our Dossier, we strongly encourage you go back to them. Enjoy reading! 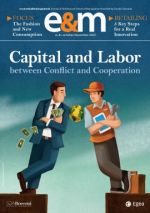