When Innovations are Fake

Dossier. Infrastructure, Italy at a Crossroads

Development and Wellbeing A Question of Works

On the Global Chessboard, the Game is On

A Historical Perspective for the Present

The Macroeconomic Context: Strengths and Weaknesses

Where the Rail System Begins

A Matter of Concessions

All of the numbers of the Brebemi project

What Future for Italian Ports

The Airport System More Can Be Done

An Intermodal Future for Milan-Bergamo Airport

The Digital Future of the Italian System

Digitalizing is a Must

New Rules for the Infrastructure of the Gigabit Society

The Open Fiber Project: how and why

Networks at the Center of the Urban Ecosystem

Electric transition between the present and the future

The competitive advantage of the global city

New Mobility for the Country

TAP: a Priority for Europe. And for Italy?

TAV: the Project that Doesn’t Exist

Negotiating Styles: the Impact of Culture

On the Global Chessboard, the Game is On

For over a decade now, the hub of global production has shifted to the East. The macro-region of India, China, and Southeast Asia now generates 34 percent of global GDP and participates in over 20 percent of global trade, most of which takes place through maritime connections. This growth is also favored by the attention to infrastructure: Asia is in fact the region that invests the most in infrastructure, with average spending per country of more than 4 percent of GDP, almost double that of Europe and four times the figure in the United States. China is undoubtedly at the center of this dynamic, with the strategy launched timidly at the end of the 1990s with the so-called "go out policy" gradually, that has taken shape over time, from 2013 in particular, with the launch of the Belt & Road Initiative (BRI). 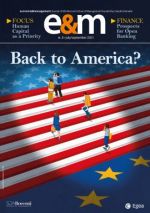