We Are Not All in the Same Boat

Despite the millions of layoffs triggered by the pandemic and the stoppage of productive activities, the American economy is undergoing a significant transformation; many productive resources are in fact being reallocated from activities in crisis to others seeing great expansion. Yet this shift is not taking place so much between different sectors, as among companies in the same sectors. It's a situation that could remain in the long-term, redesigning entire sectors and the professional qualifications required, a change the large actors in the technology sector are exploiting.

The COVID-19 pandemic is hitting the economies of every country in the world harshly, provoking an unprecedented employment emergency in many of them. An emblematic case, due to the importance of the country and the speed of the effects, is that of the United States.

Before the pandemic, the US economy was on a solid track, with an unemployment rate that had reached a historic low of 3.5 percent in February, when China had already stopped. In March, when Europeans began to hole up at home, the US employment rate had risen to a moderate 4.4 percent. Just one month later, the data for April (the most recent available) had risen by an order of magnitude, reaching an unemployment rate of 14.7 percent. This is the highest rate ever recorded since statistics have been kept, and it is expected that it will rise even further, to 16 percent. The number of unemployed increased by 15.9 million to reach a total of 23.1 million, while the number of employed fell by 22.4 million down to 133.4 million. The labor force participation rate also dropped, to 60.2 percent, the lowest level since January 1973, the high point of the effects of the oil crisis.

While the public debate focuses above all on the millions of layoffs triggered by the pandemic and the stoppage of productive activities, in the meantime something else is going on. The economy was already undergoing a transformation, with a reallocation of productive resources and market share from activities in crisis to others seeing expansion. Yet this shift was not taking place so much between different sectors, as among companies in the same sectors, as a function of their technological and organizational efficiency. A new study, presented at the Bocconi University at the start of May by Steven Davis (Professor of International Business and Economics at the Booth School of Business of the University of Chicago) shows that the American unemployment crisis does not regard all businesses, but rather there are many businesses doing very well. In these difficult weeks, there have been not only many examples of layoffs, but also of large-scale hirings. In mid-April, Walmart had already hired 150,000 new employees within one month, and planned to hire 50,000 more. Amazon has hired 100,000 new employees in recent weeks, with the goal of hiring 75,000 more. By the end of April, Dollar General, a large-scale distribution chain, anticipated hiring 50,000 new workers. The home improvement chain Lowe's is planning to hire 30,000 by the end of spring. Already at the end of March, many take-out and home delivery food chains were competing to hire new workers. Instacart has already hired 300,000 new employees and Domino’s Pizza is hiring approximately 10,000 drivers for its deliveries. Even its competitor Papa John's Pizza plans to hire 20,000 new employees to meet the growing demand for deliveries. In just the last two weeks of March, Outschool, a company that organizes distance lessons for children and youth from 3 to 18 years of age, had planned to hire 5,000 new teachers in response to the closing of schools.

Some hiring campaigns involve a coordinated shift of workers between companies with different needs in order to favor layoffs and hirings that are as rapid as possible. The Kroger supermarket chain entered into an agreement with the multinationals Sodexo, Sysco, and Marriott International to hire the workers fired by the food and hospitality industry in their portfolios. CVS Healthcare, a giant in the health sector, is trying to rapidly recruit 50,000 new employees thanks to a collaboration agreement with the Hilton hotel chain, the Gap clothing chain, and Delta Airlines, all companies with significant redundancies. Uber is advertising work opportunities offered by 7-Eleven, Amazon, McDonald’s and other expanding companies to its currently unemployed drivers.

The effects of reallocation are also evident in consumers' spending habits. The data analysis company Earnest Research has monitored credit and debit card purchases by almost 6 million Americans to assess the impact of the pandemic on consumer spending. For the week ending April 1, 2020, the data collected indicates that spending for the services of airlines, hotels, car rentals, taxis, and movie theaters has fallen 75-95 percent compared to 2019. Spending for fast food, car parts and purchases has fallen 35 percent, while spending for clothing has dropped by 70 percent. At the same time, money spent on work in the home, video streaming, video games, home delivery of food, kits for preparing meals, and online food stores has increased. Although most of the cuts and reshaping of spending will probably be reversed when the emergency passes, it is just as likely that some aspects of the change will remain.

The fact that our mental habits often lead us to think of the economy in terms of productive sectors may tempt us to believe that the reallocation induced by the pandemic will principally entail the movement of productive resources between sectors. However, the analysis of big data on the individual characteristics of companies and workers, that has undergone a strong acceleration in recent years, suggests the contrary. Idiosyncratic and specific factors of employers dominate the creation and destruction of jobs, leading to a reallocation of resources that takes place for the most part between companies in the same sector, and only to a small extent among businesses in different sectors. In the US case, there appears to be 85 percent reallocation within sectors, versus approximately 15 percent reallocation between different sectors. Steven Davis thus predicts that, in the case of the COVID-19 shock as well, most of the reallocation of productive resources and market shares provoked by the pandemic will take place within sectors.

The restaurant sector provides a salient example of intra-sectoral reallocation in the current crisis. According to a survey conducted in the United States by the National Restaurant Association at the end of March, as a consequence of the pandemic, 3 percent of owners and managers of restaurants decided to close their establishments definitively, while another 11 percent anticipate closing within the next thirty days. If we apply these figures to the total number of restaurants in the United States, we obtain over 100,000 permanent restaurant closings. At the same time, take-out and home delivery chains are benefitting from an enormous boom in demand, as illustrated by the previous examples of Domino’s Pizza and Papa John’s Pizza. Most of the impact of this reallocation taking place in the short term could persist in the long term, redesigning the restaurant sector and the professional qualifications required.

More in general, an unstable and unpredictable economic situation favors large companies with considerable previous experience and deep pockets. For example, as The Wall Street Journal wrote in mid-April,[1] the largest players in the technology sector are snatching up talent right in the middle of the coronavirus pandemic. Since some of the most promising startups in Silicon Valley are firing workers and others are freezing hiring, established companies such as Apple, Google, and Amazon are attracting the best software engineers, data scientists, and product designers. Facebook has seen a strong increase of use of its platforms during the coronavirus crisis. It has thus worked to monitor their proper functioning, including with a view towards the upcoming American presidential elections, hiring more than 10,000 people to cover critical roles in its teams developing new technologies and products. The current moment is thus giving better capitalized technological companies the possibility to grab qualified workers who until just recently were attracted by smaller startups. These observations suggest that the pandemic could lead to a strong reallocation of resources from smaller and younger technological companies to larger, more established companies. A similar dynamic could take place in other sectors, where established actors with available cash will be able to attract the best specialized workers seeking job stability, which small and medium-sized actors have difficultly offering in this period.

The reallocation underway is not just anecdotal, but quite visible at the aggregate level. The estimate is that already during the critical phase of contagion, in the United States every 10 layoffs correspond to 3 new hires. The net balance in terms of employment is clearly negative, but the size of the shift of workers from companies in difficulty to expanding ones is in any event surprising and extremely significant. 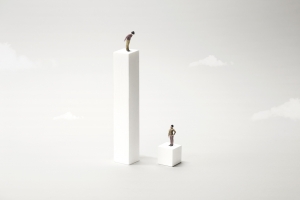