While it is still premature to describe the effects the coronavirus will have on the banking system, it is possible to determine what the condition of Italian banks is today compared to the time of the previous crisis, in 2008. They are more capitalized than in the past, and in part have resolved the problem of non-performing loans. In the meantime, though, their business model has changed, and many banks are still unable to generate profits. Only those who are able to transform themselves and innovate can hope to make it in the coming months and years.

What impact will COVID-19 have on Italian banks? This is the most frequent question in financial circles in these weeks. Today, there is no answer yet. It will take some time.

A question we can ask, though, is: what is the condition of Italian banks today compared to the time of the previous crisis, that of 2008? We can answer this question. And actually, this is a first and necessary step to take in order to answer the initial question.

We will divide our response into two parts. In the first part, we will analyze what Italian banks have done in terms of: improvement of asset quality, measures for increasing efficiency, and strengthening capital. In the second part, we will concentrate on the evolution of the traditional banking business from 2008 to date.

As we will see, an analysis of the data shows that "Italian banks in 2019," compared to "those of 2008," operate with a lighter cost structure, have greater equity, and an asset quality in line with those of 2008, that is far from the values recorded during the peak of 2015. However, in the last decade, the banking business has changed deeply. We have seen a reduction of traditional revenues from interest margins, that will likely continue in the future. That decline of traditional revenues has been offset only in part by an increase of revenues from frees. In the decade from 2008 to 2018, despite an increase of commission income and a drastic reduction of costs, not only have Italian banks not generated income, but they have accumulated losses of over 3 billion euros.

Starting in 2008, the gross non-performing loans on the books of Italian banks increased constantly until they reached the peak of 342 billion euros in 2015 (Figure 1). In that year, the ratio between gross NPLs and bank loans was equal to 17.0 percent. In the subsequent years, the improvement of macroeconomic conditions, together with measures specifically implemented by the banks (for example the strengthening of claims recovery activities and the assignment of NPLs to specialized operators) allowed for a rapid decrease of NPLs in bank balance sheets, reaching their minimum at the end of 2019 with 134 billion euros. This figure is however still higher than in 2008 both in terms of absolute value and percentage incidence on total bank loans. 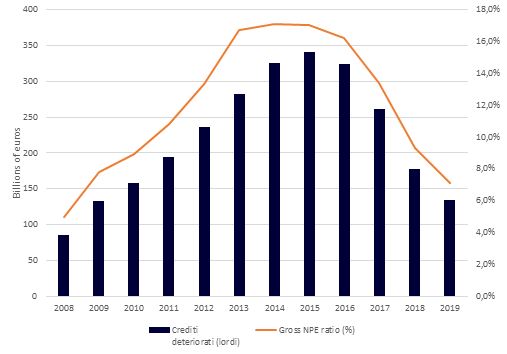 Starting in 2008, despite the increase of non-performing loans, we have also seen a significant increase in their rate of coverage, in particular for the category of bad loans with the highest risk of generating losses for banks (Figure 2). The increase in the coverage rate, as we will see, also had a significant impact on the profitability of Italian banks. 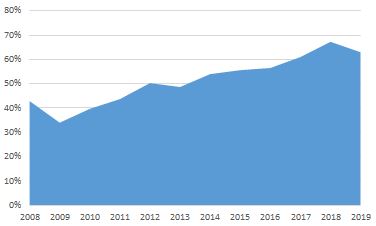 Over the course of the years, Italian banks also increased their capital endowment (Figure 3). With respect to 2008, the ratio of Tier 1 equity to risk-weighted assets has more than doubled. This ratio went from 6.9 percent in 2008 to 13.9 percent in 2018. 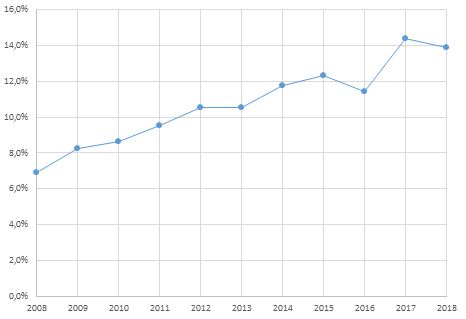 An analysis of the data published by the Bank of Italy on the number of banks active in the country, the employment levels and number of physical branches, shows that for Italian banks the last decade has been characterized by cost reductions.

In 2008, almost 800 banks were active in Italy, and the sector employed approximately 322,00 people. The number of physical branches was a point of pride and demonstrated the widespread presence all around the country. In 2008, there were 34,000 branches.

The data for 2019 give us a picture of the Italian banking sector that has changed deeply. The number of banks has fallen by 39 percent. Almost 10,000 physical branches have been closed and the sector has reduced its workforce by 40,000 employees (Figure 4).

The persistence of a macroeconomic scenario with low interest rates, the advent of technology, and the increase of non-performing loans have represented a heavy strain on banks' balance sheets and profitability. The only possibility to remain in the black (or to limit losses) has been to work on costs and invest in new technologies to the detriment of the traditional business model. 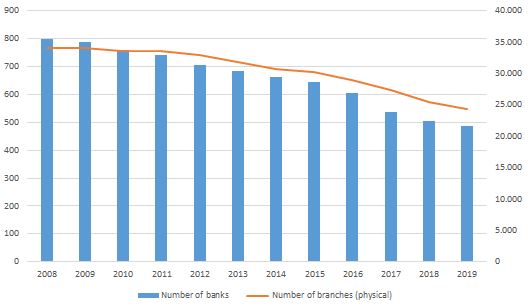 How the banking business has changed in the last decade

It's not only about asset quality, capital, and costs. The traditional banking business has also undergone a profound transformation over the last decade.

In 2008, Italian banks had revenues of over 76 billion euros just between interests and fees. In that year, the revenues from interest margin were predominant (approximately 52 billion euros).

In 2019, that figure of 76 billion euros fell to just above 63 billion, revenues from interest margin decreased by over 30 percent and fee margin, that contributed less than one-third in 2008, represented 45 percent of the total in 2019 (Figures 5 and 6). 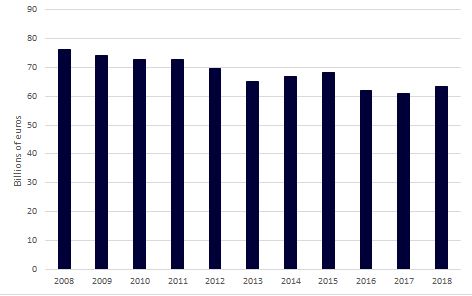 Lastly, it is useful to look at the profitability of the Italian banking sector in these past ten years. As we can see in Figure 7, if we sum all of the profits and losses over the years, not only do we end up with no profits, but we see a cumulative loss of over 3 billion euros. The increase of adjustments on loans and low interest rates, from an income standpoint, have more than cancelled out the efforts to reduce costs and transform the business model. 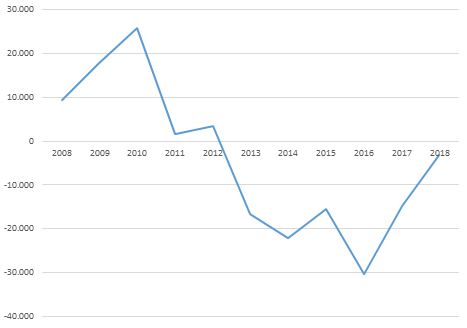 So what condition are Italian banks in today, compared to the time of the previous crisis in 2008?

Italian banks are more capitalized than in the past, and they have in part resolved the problem of existing non-performing loans. In the meantime, though, their business model has changed. The revenues generated by fees have taken on more importance, but not enough to solve the problem of profitability. Today, many banks still do not generate profits. Additional shocks on the revenue side or a return of the NPL problem to 2015 levels could have an impact on a precarious income profile. Only those who will be able to transform, innovate, and adapt their business model can hope to make it in the coming months and years, and hopefully also generate profits. 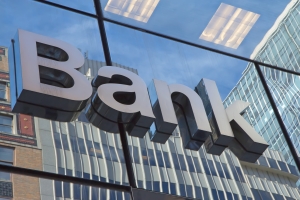