European Aid to Businesses: an Overview

The Economic and Financial Document (DEF) approved by the Italian government is in line with the actions taken by other European countries, that in recent weeks have activated funds for loan guarantees for businesses and provided for subsidized loans. This logic, entailing indiscriminate (or "helicopter") funding, must however be accompanied by more structural interventions to be planned starting now

The health crisis is now being followed by the economic crisis. In its April outlook the International Monetary Fund forecasts a 9.1 percent drop in Italian GDP for 2020, followed by +4.8 percent growth in 2021. The recently approved DEF foresees a drop of 8 percent, followed by 4.7 growth in 2021. Apart from forecasts - whose reliability is relative, since it is still not possible to fully assess not only the economic consequences, but also the real prospects for recovery, that will inevitably be conditioned by the course of the epidemic - it is clear that the coming months will be very complicated, and that the Italian economy, that is already more fragile than that of other European countries, will find it difficult to make up for lost ground.

The measures adopted by the government through Decree Laws 18 and 23 of March 17 and April 8 concentrated, on the one hand, on support for income from work, and on the other on providing liquidity to businesses, through loan guarantees, moratoriums on loan payments, and deferment of tax obligations. The so-called "Relaunch Decree" established an extension of the aid measures, for example making available grants for companies with up to 5 million euros in turnover. Italy has thus followed what has been done in other EU countries in recent months.

The comparison with other countries

Analyzing what other Member States have communicated to the European Commission,[1] in light of the temporary picture of assistance in the context of the COVID-19 emergency, we see similarities, but also some differences. All of the states have activated loan guarantees and provided for subsidized loans (Figure 1). Moreover, most countries have made it possible to support micro and small agricultural or fishing enterprises with direct subsidies in the form of grants that need not be repaid. 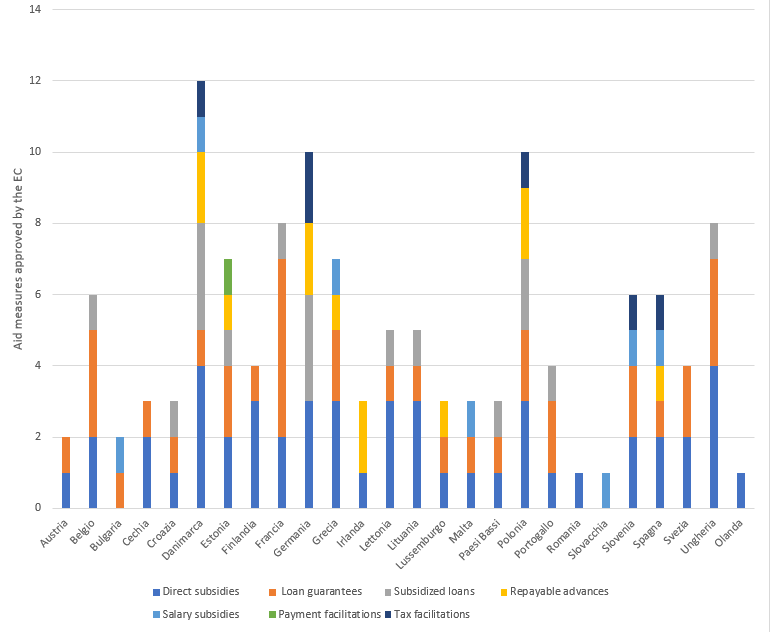 Analyzing the temporal progression of the authorized measures (Figure 2), we clearly see that European countries have increasingly focused on strengthening loan guarantees, and even more markedly, on providing direct grants, expanding the base of beneficiary enterprises. 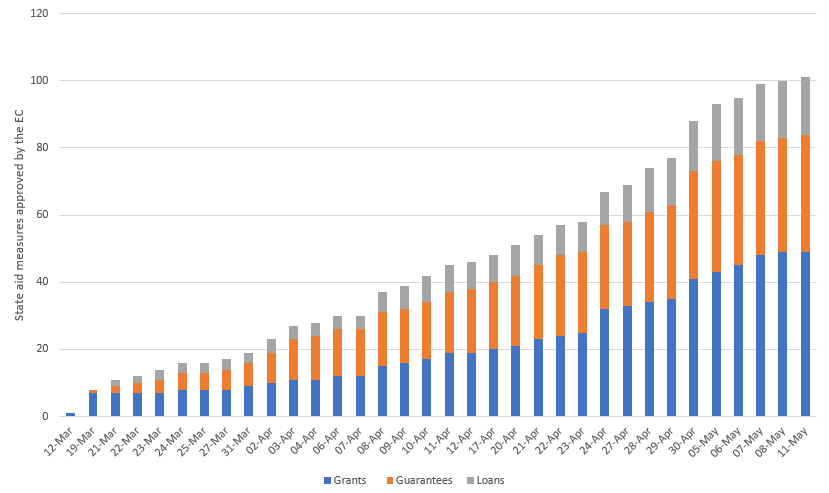 The subsidies are provided in the context of the EU Temporary Framework, that makes it possible to adopt a multi-sector system of aid of limited amounts, to be granted in the form of direct subsidies, up to the limit of 800,000 euros per enterprise (given the lower limits for the agriculture, fishing, and aquaculture sectors). This measure has a series of advantages:

The establishment of a system of this type is simple and quick, despite requiring prior notification of the Commission, which however has committed to authorizing all schemes based on the EU Temporary Framework very quickly.

The issue of assistance to enterprises has always been at the center of both institutional and academic debate, being one of the key tools of economic development policies, including the European Union's cohesion policy. Unlike other countries, Italy has never distinguished itself for strategic use of the various forms of aid (guarantees, subsidized loans, mixed private equity/venture capital funds, grants, tax concessions), often preferring grants, especially in the context of structural funds, because they are simpler to structure and able to generate more immediate political consensus than subsidized financial instruments.

The tailoring of aid measures is fundamental to ensure the efficacy of these tools, as demonstrated with reference to loan guarantees by a recent study conducted by some professors of the Bocconi University,[2] who have analyzed the economic contribution provided by the Central Guarantee Fund. The study highlighted how, in the middle of the previous economic crisis, between 2007 and 2009 the Fund's benefits were most significant for micro and small enterprises, those hit hardest by problems of informational asymmetry and lack of funding.

However, at this moment in history, the need to ensure rapid response times does not allow for a more targeted use of subsidies and subsidized financial instruments. In the current emergency, Italy has taken a similar approach to other countries, first expanding access to credit, and only subsequently, faced with the historical scope of fall in demand, introducing temporary measures to directly support turnover.

These instruments are more costly than guarantee funds, that due to a multiplier effect, at least on paper are able to mobilize more capital. However, in the current context, they could turn out to be ineffective, because there is a tangible problem of supporting turnover. The hardest hit companies are those in retail, tourism, Ho.Re.Ca, culture and entertainment, and personal services. These are micro and small enterprises, generally family-run, unlikely to be bankable, and above all that now have to face an unprecedented situation in terms of uncertainty of demand.

Recommendations for the future

In the emergency, the logic of indiscriminate aid (or "helicopter money") in the short-term may make sense to avoid closing many activities. Yet it is a stopgap solution that must be accompanied by other, more structural and tailored measures, that should be planned starting immediately.

For this purpose, it is necessary to lay the basis for using public capital according to the logic of public-private collaboration with the financial system, to generate additional financial benefits, but also, and above all, to support innovation and business initiative. In the past Italy has not demonstrated much familiarity with structuring "blended" programs, including through the use of European funds, despite the recommendations from the Commission. The high level of public debt and a pre-COVID economic situation that was extremely vulnerable require an extraordinary mobilization of domestic private liquidity, in a logic of investment, that corresponds to approximately 200 percent of the country's GDP, and above all, of all of the competences available.

To do this, political leadership and policymakers are needed who are able to activate and sustain a network of actors, using streamlined regulations, entrepreneurial ideas, and the experimentation of solutions to stimulate innovation and combine economic interests and the protection of public health. The coming weeks will be decisive from this point of view, to avoid being left behind with respect to other European countries. One lever the government will certainly decide to use is that of public investment, that for years has been held hostage by anti-corruption regulations, that de facto, have generated more formal than substantive attention to the problem.

The hope is that in the emergency the focus is not only on public tenders and opening construction sites, but also favoring innovation, in the way investments are carried out, but also in the underlying logic. From this standpoint, it would be advisable not only to give precedence to renewing obsolete infrastructure that represents a real danger for the population, but also to encourage less capital intensive investments that aim to offer services to local communities and citizens. Moreover, we should hope that while rethinking the logic of investments, attention can finally be paid to the possibility of greater collaboration with the market, to mobilize both private capital and innovative solutions, pursuing goals linked to value and sustainability in the medium to long-term. One path could be public-private partnerships, to be used not only to attract private liquidity and reduce the impact on public budgets, but also because they are potentially more capable of innovating the logic of providing public services, if used strategically (consider the need to rethink urban mobility, sports facilities, or school buildings in the post-emergency period, or the need to upgrade local health networks). A second path could be that of social impact bonds or impact investing, thanks to which private liquidity can be invested in new business activities aimed at offering new services to the market, generating financial returns, social impact, and employment. These solutions would be easy to activate; yet the market needs a political signal in order to trigger this potential. Since a subsidy is not a cure, it is hoped that the next decrees will include some provisions aimed at legitimizing these tools to stimulate greater convergence between the public and private resources to generate shared value. 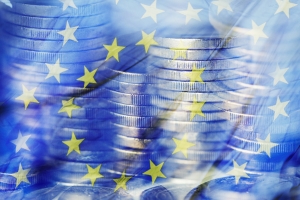