The Bill Against Homotransphobia: What Side Are Businesses On?

After 24 years, the Italian Senate is finally set to consider a bill against homotransphobia that would allow our country to approach France, Spain, and Germany in terms of the protection of the LGBTQI+ population. A favorable legislative environment would also favor businesses, making inclusion easier in their organizations. However, there has not yet been a common public stance or statement made by entrepreneurs, managers, or their associations.

May 17 is the International Day against Homophobia, Lesbophobia, Biphobia, and Transphobia. The idea for the celebration came to Louis-Georges Tin, the editor of the dictionary of homophobia, in August 2004[1] to recall when in 1990 the World Health Organization decided to remove homosexuality from the list of mental diseases. The idea took hold, and in the following year, 2005, the 1st day against homophobia was held with the support of important international organizations (including ILGA).[2] In 2007, a resolution passed by the European Parliament designated May 17 of each year the International Day against Homophobia.[3]

In 2021 the day comes during a debate among the media and the public of the so-called "Zan Bill" ("Measures to prevent and combat discrimination and violence for reasons linked to sex, gender, sexual orientation, gender identity and disability"), which takes its name from the sponsor of the bill in the Italian Chamber of Deputies, Hon. Alessandro Zan of the Democratic Party. On June 26, 2020,[4] we wrote a post saying that Italy and its LGBTQI+ citizens have been waiting for this law since 1996, when the first bill against homophobia was presented by Nichi Vendola. Twenty-four years later, the Senate is set to consider a bill which has brought together five different proposals. The bill was approved by the Chamber of Deputies by a strong majority on November 4, 2020 (265 in favor, 193 against, 1 abstention).[5] The text was sent to the Senate on November 5, 2020 (the announcement was made to the chamber during the session of November 10, 2020). The bill was taken up in committee in the Senate on May 6, 2021.

The approval of the bill would allow Italy to come a bit closer to Spain, Germany, and France. Since 2009, ILGA Europe[6] has published a report each year that compares 49 European and Central Asian countries, evaluating the constitutional and legislative apparatus and assigning a score in order to highlight the level of protection and defense of the LGBTQI+ population. In the 2021 rankings Italy is 35th out of 49 countries, with a score of 22%. Germany is 16th with a score of 52%, France is 13th with a score of 57%, and Spain is 8th with a score of 65%.[7]

Opposed to the Zan Bill are the parties on the right, fundamentalist Catholic movements, and the radical fringes of the feminist movement. It is supported by the center and the left, LGBTQI+ movements, and secular and progressive forces. According to a poll conducted by Demos & Pi for the daily La Repubblica,[8] it was found that 70% of Italians over 18 years of age favor or heavily favor the law. The degree of support falls as age rises, and is sensitive to the links the respondents have with the religious community (those who are involved with religious communities are less favorable) and to voting intentions. The law is supported by 87% of Five-Star Movement voters, 85% of Democratic Party voters, 71% of Forza Italia voters, 60% of League voters, and 55% of Fratelli d’Italia voters. Based on these results, we see a difference between the positions of the parties on the right and their potential voters.

Both this year and last, the President of the Republic decided to send a strong message on the issue: "Society is enriched by the contribution of diversity. Contempt, and exclusion of those who are considered different, represent a form of violence that generates regression and can lead to unacceptable fanaticism. An injury caused to a single person offends the freedom of all. And unfortunately the episodes of moral and physical violence that in addition to the victims offend society as a whole, are many. Solidarity, respect, and inclusion, as also demonstrated by the work to combat the pandemic, are powerful mechanisms of social cohesion and security."[9]

Last year, the former Prime Minister Giuseppe Conte stated: "The International Day against Homophobia is not simply an anniversary, an occasion to celebrate […] it must also be a moment of reflection for all, and in particular for those who have institutional roles to work to favor inclusion and respect for people […] This is why I invite all of the political forces to converge on a law against homophobia that also aims to create robust forms of social education: violence is a cultural problem and a social responsibility."[10] This year, the current Prime Minister did not issue a statement.

The goal of the law is to combat hate and violence (not simple "opinions"); it would be another tool to assist citizens who are oppressed and discriminated against based on sex, gender, sexual orientation, gender identity, and disability.

There are many businesses that have adopted policies of inclusion or have supported the creation of networks of LGBTQI+ workers within their organizations, and that between the end of May and June, will dedicate a series of events to addressing the issue of diversity. Some of these have discussed, or will discuss the contents of the bill and the possible repercussions for discrimination in the workplace. A favorable legislative environment helps businesses because it makes inclusion easier for them. On the labor front, the CGIL union is openly supported passage of the bill: "The Zan bill also regards work […] It regards people who are discriminated against in the workplace, threatened, and subject to mobbing. The Zan bill is freedom of being, in the workplace and in society, without feeling […] in danger. We call for immediate passage of the bill. We will continue to support all actions that combat discrimination, consistent with the spirit of the confederal unions."[11]

As regards the business world, a common position is currently lacking. There have been no public statements by entrepreneurs, managers, or their associations (Confindustria, ABI, Confartigianato, Confagricoltura).[12] What side are businesses and their associations on? It's not enough to assign the issue of inclusion to marketing communications. It would be important for businesses to take a position before the bill is passed: exploiting its benefits rhetorically after the fact would be too easy.

[12] There are no statements or press releases on the public websites and/or social media accounts of businesses/business associations. 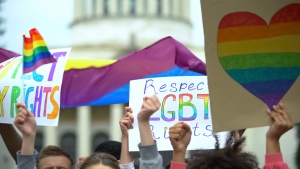