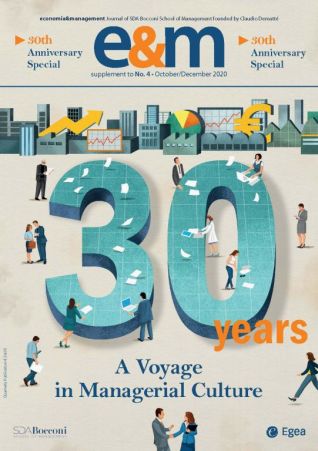 The Strength of Roots to Anticipate the Future

Corporate Governance: between Art and Profession

Knowledge: A Factor for Competitiveness

Vincenzo Perrone was the editor-in-chief of Economia&Management from 2004 to 2013. In this interview he retraces some of the fundamental points of his term, and his dream to make this magazine a tool to support the country's economic development.

Vincenzo Perrone was the editor-in-chief of Economia&Management from 2004 to 2013, as he often recalled, "I became the editor suddenly, on a particularly sad day, when Claudio Dematté died before his time." But I was alongside the founder of this publishing venture from the start, in 1988, first as a member of the editorial board and then as the deputy editor. The slogan he chose to define his editorial approach when he took over the magazine – "what's interesting offered and argued rigorously" – ultimately represents the key feature of his way of thinking and operating, which is visible, among other things, in the many pieces he authored that enrich the archive of Economia&Management. A Professor of Business Organization, he is one of the leading Italian experts in organizational behavior – a role that in a certain sense is austere – and also, among other things, the pro-rector of research at the end of the first decade of this century; as well as an experimenter with forms of expression and dissemination, often full of caustic spirit.

You have been a protagonist of the history of this magazine, which you worked on for almost a quarter of a century. Actually, you sort of are the history of Economia&Management. Given your characteristic irony, what effect does this have on you?

The first, the most obvious, is that of feeling old. In my time, I gave lessons with transparencies and overhead projects, processed data with mainframe computers and punch cards, and communicated for the first time with my colleague overseas using Bitnet, that was sort of the father of the internet. I still remember the excitement of waiting for a response to a message, watching the prompt on a completely black screen flash for many minutes. It was a time when magazines were bought (by businesses as well), collected, read, and used. Today things are very different, and have changed quickly. But the time that goes by, when it goes by in a lively and stimulating place like the editorial offices of Economia&Management, enriches and changes you enough to make you able to ride the wave that arrives, balanced on the surfboard of what you say and who you are. History is us, as a famous song says. Our magazine has always been the result of a collective effort, where if I had any merit it was that of surrounding myself with valid people, people such as Fabiola Mantegna, the editorial secretary who began to work on the magazine with Claudio and continued with me. Or with my talented deputy editors, a couple of whom later become rectors of the Bocconi. But every person on the editorial board always did their best to make us proud of what we sent to the newsstands; given that in those years, Economia&Management could be found there as well.

Creating and spreading managerial culture: what do you think have been the elements of progress (or regression, if we can say so) that have marked the last 30 years?

Managerial culture is a demanding expression, as this question is. It can be a guide for work, as it was for me when I led the magazine. Everything I did was to try to truly create culture, expand horizons, and experiment, for example relying on multidisciplinary studies, contamination, opening to the world, and even a sense of humor with the columns entrusted to experts on China, well before it became the problematic power it is today, or to witty comics such as Tarasso. The risk we often run is that the expression becomes an oxymoron, where one term contradicts the other. This happens when managers limit themselves to technique and the preservation of the status quo. When they stop asking why they do what they do, and for whom, and limit themselves to the what and how. When they believe they know enough to manage and no longer exert the effort to learn what is needed to grow as people, as businesses, and as a country. Doing business in Italy is very difficult today and requires a sort of Zen commitment, that often takes away a lot of the private life of a manager or entrepreneur. If we don't open the mind and heart to the breadth and depth of culture – in addition to opening stores, offices, and bank accounts – it is difficult to have success, and above all to last.

As an expert of all aspects of organizational behavior – in an article some years ago in the newspaper Il Giorno, you referred to your interest also for the unconscious and irrational aspects of human behavior – how have you seen this area of study change over time? What, how much, and how have "transformational" factors impacted people?

If we look at women and men, at how they think, and how they act and the emotions they feel, we cannot say that much has changed over time. Otherwise we would not be able to explain the fears, hate, cognitive distortions and mental suffering that still characterize us today as individuals and peoples. Our dark side is still there, and what we can do to dominate it is recognize it and welcome it as a part of us that we can transform into clean, not destructive energy. The environment seems to increasingly challenge our limits rather than help us grow with our points of strength. If I understand what you mean by "transformational" factors, I think that technical knowledge risks no longer being dependent on us but dominating us (something money and finance have already achieved). Together with the problem of social identity, the factors of belonging that we use to define who we are, these are two questions that will have strong repercussions on our wellbeing as individuals and a species. I think that to address them properly we will have to give increasing space to a search for sense and profound meaning in ourselves, in our network of relations, in our businesses, and in the planet that hosts us. I see signs of revival of an interest towards a spiritual dimension of being and doing that I find interesting and useful in view of the straits we will have to pass through.

In a 2016 editorial, in line with your style, you indicated as among the duties of the magazine that of contributing to reviving the country, hoping that rigor and agility were not only "an editorial aspiration or an unreachable oxymoron, but a new way of combining Italian genius, that is light and intangible (precisely what is needed in today's advanced economy) with a greater sense of responsibility." Does this hope still apply to the difficult historical passage we are living through, including looking beyond the aims that a magazine can and must contribute to fulfilling?

Being hypercritical, I am always astonished when I discover that I said something that I still find intelligent and interesting today. I hope that my neurons continue to work well as they apparently did in 2006. I think that combining rigor and agility is an essential challenge above all for us Italians who are inclined to choose the latter over the former, that is considered a characteristic of old fogeys or frugal, sad Northerners. Instead, for example looking at the management of the current pandemic, it is truly necessary to mix these two ingredients together, that seem to have emerged from the American lessons of Calvino. Judicious communication based on verified information should avoid both pushing the drug of fear and that of irresponsibility. Using the resources we have creatively should prevent us from spending what we are borrowing in quantities leading to an overdose, and that will worsen our life and that of our children, perhaps much more than the injuries the virus will leave in the bodies of those it visits. Learning that red lights are not God (another songwriter quote), but that it is still a good idea to respect them and obey the rules that protect our safety, will make us more capable of managing complexity without being overcome by it. The rules are needed to limit the power of the strong and rich, and to shield us from their selfish will. The rules are the basis of that fragile and precious thing that hundreds of years ago a group of us called democracy. There is no person, business, or country that can deal with their future if they don't think it is their own responsibility to do so. Stop looking around and far away – from the caste of powers that be, passing through pharmaceutical companies and the Brussels bureaucracy – those responsible for everything negative in our life and in our society. To change the world and make it better, we hope, each of us should start with addressing our own home or office, our own street or city. Responsibility that is ethically grounded at the micro level and a sustainable project shared by the greatest number of people at the macro level. If I were to lead a magazine today, with the idea I had then of using it as a tool for the economic and social development of the country, I think I would try to put into print these two pieces of a nice dream. I'm sure I would find new readers willing to travel the path with me. 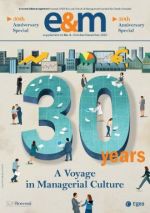 di Perretti Fabrizio The current editor-in-chief of Economia&Management , Fabrizio Perretti, takes stock of the first 30 years of the magazine and outlines the scenarios and challenges to be faced in the near future.