Restaurants “Suspended in Time” during the COVID-19 Crisis

Chef Davide Palluda of L’Enoteca and Giancarlo Camanini of Lido 84, tell us how they have dealt with the recent weeks, and their impressions of the pandemic’s effects on the restaurant sector. From the initial decision not to launch a delivery service to the future management of safety concerns and the relationships between colleagues and customers, their comments represent the experiences of many restaurant managers.

Social distancing is the very ancient technique that has proven effective to face the COVID-19 emergency. While it is true that the measures have had consequences on all sectors, there are some that have suffered more than others, because their businesses based on “sociality,” where being together with others and sharing experiences is the key feature.

In both generalist and specialized media, an ample debate has arisen on how restaurants are dealing with the emergency and what their future may look like. The discussion is pervaded by an underlying uncertainty, because the solutions are “all and none,” and the responses are very different based on the type of restaurants considered, the phase of their life cycle, where they are located, and so on. Some say “everything must change in the future,” while others say, “once the emergency is over, everything will go back to normal.”

We decided to join the conversation. We interviewed Davide Palluda, the chef and owner, together with his sister Ivana, of the restaurant L’Enoteca in Canale nel Roero (Piedmont) and Giancarlo Camanini, manager and owner, together with his brother Riccardo (chef), of the restaurant Lido 84 in Gardone Riviera (Lombardy).[1] We chose two gourmet restaurants, both with a Michelin star and located in small towns, although both Roero and the Garda Lake are towns with an international projection; two family-run restaurants, and thus not linked to chains and/or global investors. They both closed during the week of March 9, and currently, don’t know when or how they will reopen. From that time on, they have lived “suspended in time,” in a certain sense. We’ll see if this time has been lost, or will be regained.

In this period of closure to the public, both L’Enoteca and Lido 84 decided not to launch a delivery service. This, for essentially three reasons: market, identity, and priority. The market, because their local areas are too small to justify the startup and management of a home delivery service. As for identity, Davide Palluda told us: "Our cuisine is concentrated in details, explanation, we try to put the customer at the center of the menu, take him by hand the accompany him. Years of work and confidence with the customer cannot be reduced to a dish delivered at home." Regarding priority, Giancarlo Camanini specified: "Delivery would have entailed some difficulties and considerable uncertainty, so we decided to prefer an intimate dimension, exploiting the free time to move forward with working groups (remotely) with the restaurant team and to think about the future, to plan the reopening."

Both restaurants are able to survive this emergency in the short term. This ability to resist is based on two factors. On the one hand, both of the restaurants are financially sound, the result of prudent management in the past. These are not restaurants that have just opened: L'Enoteca will celebrate its twenty-fifth anniversary this year, while Lido 84 is more recent (it was opened in 2014), but Riccardo Camanini has many years of experience in the gourmet restaurant sector, and Giancarlo has a past as a manager. On the other hand, there is the possibility to make use of unemployment benefits for their employees, and thus to temporarily reduce their fixed costs. This highlights how important it is for a gourmet restaurant to have the possibility to achieve and maintain economic-financial equilibrium, a balance between creativity and management and a good relationship between cuisine and table management. These three aspects, and the first one in particular, are difficult to achieve at the beginning, when costs and investments are much higher than revenues. This is why the emergency will penalize above all restaurants that have just opened, younger and more independent chefs, those who are not supported by large investors. The crisis will probably burst the restaurant bubble, but this explosion will affect fleeting businesses that already had a dubious future, and also promising restaurants that simply have not had the time to establish themselves. Perhaps the government should work on assisting these businesses.

It is also important to stress that economic-financial equilibrium was not attained by shifting the problems linked to the closing onto suppliers. Both restaurants have paid their suppliers for the deliveries made while they were still open: "I consider having paid our suppliers a priority;" stressed Palluda. "In our area we don't have suppliers, but collaborators and friends."

"We work with many small producers who provide us very high-quality products; we talk to them, we are paying everyone, we haven't asked for any deferments, but for them the time factor is certainly very important," added Giancarlo Camanini. This aspect highlights how gourmet restaurants are at the center of a network of other businesses with which they share work on quality, where not only is the strictly financial dimension important, but collaboration and trust are central.

This situation of being suspended in time, however, must end, because even for strong restaurants the ability to resist is not infinite. Both L'Enoteca and Lido 84 are thinking about how to organize the reopening. There are two problems: the management of safety in the premises (in the kitchen and the dining area) and the relationships between colleagues and with customers. On this point, they are studying: a reduction of the number of seats; greater distancing of the tables (that is already high) and a reorganization of the room and/or outside areas; the introduction of shifts for workers and customers; the use of individual protection devices; and a change in some of the gestures used during service. Guaranteeing safety is a great challenge, because the current deadlock will pass, when the fear has passed. The main problem here is a lack of clarity regarding what rules and parameters will be used to decide if a restaurant can open or not. This lack of clarity is added to the underlying uncertainty of the general climate, and of how customers will behave. Both Davide Palluda and Giancarlo Camanini agree that we are not facing a crisis of demand or the identity of gourmet restaurants. Palluda says: "Customers are like neighbors. In a small town we have never departed from certain principles (the links with the community), in a certain sense we have had our feet on the ground and our head in the clouds. I think that people want to leave home to experience the same emotions they had before." Neither agrees with the idea that it will be necessary to change style and lower prices, despite the presence of a difficult economic situation. One of the strong points of the two restaurants is that they have more Italian than foreign customers. In the short-term international tourism is expected to be blocked, and thus the market of potential customers will be represented by Italians. Maintaining a good balance between the domestic and international market is an aspect often neglected not only by gourmet restaurants, but by many businesses as well. For restaurants it is risky to depend only on tourism, just as it is risky for other companies to depend only on exports. 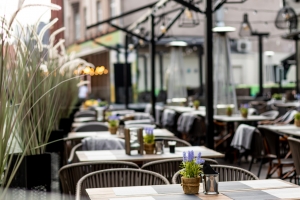