The Cardinal Points of Phase 2

Instead of creating the umpteenth committee of experts, our government could have asked for advice from the institutions of China and South Korea, two countries that with different approaches have had direct experience in the management of the phase following the Covid-19 pandemic

In recent weeks, the debate has focused exclusively on the need for reopening the economy and the beginning of what is called "phase 2." Many businesses and commercial activities are demanding this, along with their institutional representatives as well. In various cases this is an unjustified request, because for many sectors there is a crisis of demand that will last for months, until people feel safe. For example, if the entire tourism sector were to open up again in two weeks, there would not be sufficient customers to sustain it. Yet there are other sectors (especially intermediate and capital goods) in which the situation is different. If we are all stopped, then there is no risk, but if some actors, in other countries, start first, then there is a risk of losing markets, perhaps forever. In many countries businesses are open or opening up now (such as in China), and they are clients of Italian companies. The risk of competition here is certainly greater, and unless our businesses have invested in specific elements in the past (quality, brand, service), the loss of clients may not be only temporary. So from a purely economic standpoint - which must never take priority over other collective rights and over the protection of public health, though - the risk is real.

The government has decided to deal with this issue with the creation of an (umpteenth?) committee of expert, which gives rise to many doubts. First of all, because the competences to make the decisions regarding reopening should already be present in the various ministries of the government. There should already be people who know their areas of responsibility well, who have data and information and who are used to interfacing with the various actors who make up our society (businesses, hospitals, workers, universities, cultural activities, etc.). If we think that a single person called on to join a committee has much vaster and deeper knowledge in each of these areas, this means that our institutions are not up to the tasks entrusted to them. In any event, this is a signal of delegitimization that fits into the common criticism - often from populists - against what is called the bureaucracy, that de facto represents an attack against the state and its institutions, in favor of "light" models (networks, individuals, or meritocracy that selects so-called experts without democratic criteria).

The second doubt regards the composition of the committee. Here I am not referring to the individuals who have been chosen to participate, but to the logic behind their selection. If I have to ask for help on how to manage the next phase, an elementary principle is to ask those who have already faced a similar problem, to understand how they did it, what errors were made, what they would not do again, and what worked. We have two examples here, that are very different in terms of approach and context. The first is that of China, that has an authoritarian political system and adopted a strategy based on a very strict lockdown (and that decided to reopen economic activities only after having a number of new infections per day close to zero, or in any event very low, for several consecutive weeks).[1] The second is that of South Korea, a democratic country that never closed all of its activities, but adopted a more selective approach, based on gathering very detailed, widespread information (through tests and apps), with very rapid response times in order to isolate the single centers of infection.

The Italian approach was initially closer to the Chinese one, but - resources permitting - it is clear that the Korean approach must be the example for the next phase. Instead of creating an ad hoc committee, perhaps our government should have asked for advice from the institutions of these two countries, because they are the true experts. Not necessarily in the sense that they know what needs to be done, but because if nothing else, they have direct experience of a similar situation. This is no small difference with respect to the committee just appointed. Why was this not done? Perhaps because we are increasingly cultural prisoners of the "orientalism" which Said spoke of,[2] in which the Orient is the place where the "other" resides, those who are "different," "exotic," and often also "inferior." A place to be observed - even with wonder - but not from which to learn, to copy. When China built a hospital from nothing in record time, we had the same attitude as the Umarells - a dialectical term from Bologna referring to pensioners who watch work done at construction sites - not of those who see an incoming tsunami. The same can be said of the attitude that other European countries initially had with respect to what was happening in Southern Europe, to Italy and Spain. In this global world, some cardinal points (East/West - North/South) still represent profound and dangerous cultural frontiers. Even now that we have the opportunity to learn from those who have managed the next phase before us, we have preferred to turn our eyes elsewhere. 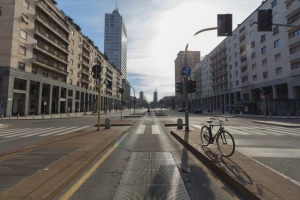