The Economic Consequences of the Coronavirus

In China, the Ford, Toyota, General Motors, Nissan, and Hyundai production lines have closed, while Starbucks, H&M, and Uniqlo have closed many of their stores. Some estimates of the consequences reach 50 billion dollars.

"When China sneezes, the global economy catches a cold," it was said in Napoleon's time. And now, faced with a epidemic that the People's Republic of China is attempting fight by limiting the movements of 1.4 billion people as much as possible, the entire world is waiting with bated breath. The numbers of people infected and deaths have exceeded those of the nine months that between 2002 and 2003 shook East Asia with the SARS epidemic (1). People try to make comparisons today, but at the time China had just joined the WTO, while today it is the second largest economy in the world, representing one-sixth of global GDP.

Since then, annual global production has grown more than eight times over, rising from 1.7 to 14 trillion dollars according to World Bank data (2). The Chinese share of global trade has more than doubled, going from 5.3 percent in 2003 to 12.8 percent today, according to the Oxford Economics consulting firm (3). In the same period, per capita GDP has gone from 1,500 dollars in 2003 to almost 9,000 dollars in 2019, strengthening the purchasing power of families. "Today China accounts for about one-third of global growth, more than the United States, Europe, and Japan combined," Andy Rothman, an economist from Matthews Asia, recently told a committee of the U.S. Congress. (4).

In an increasingly interconnected economy, companies and multinational corporations from every corner of the globe are realizing how much they depend on China. In important manufacturing centers, "non essential" economic activities have been closed and vacation periods that started with New Year's has been extended to some future date. Thus the production lines of Ford, Toyota, General Motors, Nissan, and Hyundai have been closed. Apple has warned of the effects of the economic slowdown on its production chain, given that most of the factories it relies on, including Foxconn, will not reopen for now.

Starbucks has closed over 2,000 stores, H&M and Uniqlo dozens. Similar measures have been taken by KFC, Pizza Hut and McDonald's, while Disney, that was preparing to capitalize on the arrival of the year of the mouse by exploiting the popularity of Mickey Mouse, had to close its parks in Shanghai and Hong Kong. Cinemas, theaters, gymnasiums and other places for public entertainment remain closed until further notice, not to mention hotels and vacation packages cancelled throughout the world. HSBC, Lg Electronics, and Facebook have suspended the trips of managers and other employees and have self-regulated to quarantine those who have traveled recently in the area of the contagion.

The most populous nation in the world has been blocked since January 24, when the New Year's vacation began; a total of 16 cities have gradually been placed under quarantine, and by now over 700 metropolises and 20,000 towns around China seem abandoned. It is still not clear how long this state of alert will last; the most optimistic forecasts predicted that the peak of the epidemic would be reached on February 8, but that was not the case. By now many believe that the peak won't arrive until May, and we need to consider that China not only produces, but consumes.

More cars and smartphones are bought here than anywhere else in the world, and it is the Chinese who now spend more than any other nationality when they travel abroad: over 250 billion per year according to the World Tourism Organization (5). The economic impact of all of this is still not clear, but according to the economists from Nomura (6), the coronavirus "could hit the economy harder than SARS did," thus costing approximately 50 billion dollars, decreasing GDP growth in the first half of 2020 by one or two percentage points out of the estimate of 6 percent.

The repercussions are evident in the prices of raw materials. The value of industrial metals has collapsed, while that of gold has risen. Investors are seeking shelter goods such as precious metals and they expect that, with the "workshop of the world" closed, there will be less demand for raw materials. The value of copper has gone down by 11 percent since mid-January. Oil has dropped even more. Even the service sector will suffer the consequences. The harm to China's GDP is estimated at between 0.5 and 1 percent in the first quarter, a harsh blow for an economy that was already slowing down due to increasingly high debt, a drop in internal demand, and the aggressive tariff policies of the United States. Consider also that the 6.1 percent GDP growth recorded in 2019 was already among Beijing's lowest forecasts and much less than the 6.6 percent of the previous year.

The economist Zhang Ming of the Chinese Academy of Social Sciences, a think tank linked directly to the Council of State of the People's Republic, predicted a wave of stimulus and state aid (7). But according to a declaration by the economists of Nomura and Reuters, the worst is yet to come (8). According to the most cautious predictions of Oxford Economics on the consequences of the coronavirus epidemic, this year Chinese growth should come in at around 5.6 percent, compared to 6.1 percent in 2019. This could lead to a contraction of 0.2 percent for global growth, bringing it to 2.3 percent, the lowest point since the time of the financial crisis that broke out ten years ago (9). 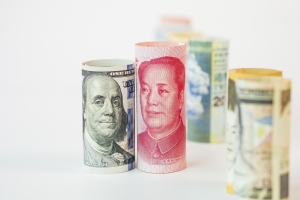