After the initial adjustments due to the aggravation of the crisis, the Group’s web, radio, and TV services have continued without interruption, while ensuring the safety of all personnel. This has allowed for continuing communication activities that now more than ever, have a fundamental social function.

Being a multimedia outlet in the era of Covid-19 is a daily challenge that necessarily requires a keeping one eye on the present, and the other looking to the future.

When the first signs arose at the end of February, Mediaset took measures to face what was an unprecedented crisis. The initial goal was to guarantee the safety of the company’s personnel; the second was to adopt methods of operation that would guarantee the continuation of activities, that in this period can be considered a true public service. The first meeting of the Crisis Committee (created within the organization in November 2018, but never before used) was held on Sunday, February 29. Four increasing emergency levels were identified, and each level was associated with operational decisions regarding the organization and processes, with a series of choices tailored for each single organizational area and location.

The first week went by without particular changes compared to normal activities: the Rome facilities performed their normal work without interruption, while those in Milan began to marginally modify their operations. The level of the emergency was changed repeatedly, within just a few days, starting on March 8. Today only the activities indispensible for broadcasting programs are kept in the production facilities. The rest of the Group works from home, with a very high level of productivity.

The Group had already introduced smart working previously, and starting in March it was extended to all non-industrial activities. This way, the physical presence of employees in the Mediaset facilities was reduced to a minimum. From an organizational standpoint, some changes were made to production processes (think of the exclusion of the audience in transmissions starting on February 29) as a function of the importance of the activities and their location (Milan or Rome). Today, the end result can be considered excellent. Production activities have continued, allowing for the continuity of web, radio, and television services. At the same time, all of the support activities have continued remotely, without interruption.

The company made itself available to the institutions to transmit public service messages to the population, and this activity was accentuated with messages produced internally and by entertainment stars who work with the Group. At the same time, we attempted to inform the institutions of the conditions necessary to continue with a service that today more than ever, has becomes indispensibl for all Italian families.

The protocol for managing health emergencies has guaranteed quarantine, sanitization of premises, masks, gloves, temperature checks, and flexible work for all employees entering the facilities. The CTO area has had to manage the explosion of the number of remote workers. But everything has worked properly, and no problems have been reported. The HR area has rapidly and effectively managed communications with personnel and the health emergencies that have arisen in the period. Fast, personalized solutions have allowed for continuing activities. The Finance area has reacted excellently despite the logistical difficulties due to remote working. Furthermore, the process of drawing up the 2019 financial statements was completed in advance. The date of the Board of Directors meeting originally set for approval, on March 10, was respected. All of the lines of credit coming due in 2020 (which by chance are a small percentage of the total outstanding) were renegotiated and pushed beyond 2021.

The operational business model was rapidly adjusted, using the example of the period of the year with the lowest level of activity (August). All of the operational functions were adapted to follow the habitual models and processes for the summer period. The functions that came under the most stress were certainly those in the news area. With a complicated slalom between quarantines and other difficulties in guaranteeing the safety of the journalists providing a public service, Mediaset has succeeded in maintaining the programing of almost all of its information shows. Greater problems were found in the entertainment sector, in part due to the lack of audiences, leading to a drop in the number of productions. The immense library of video rights Mediaset holds has made up for the lack of direct production, though. The offer of products on the internet (Mediaset Play and Infinity) was strengthened to guarantee better services for a larger, more demanding audience, given the need for people to stay at home. In terms of consumption, these products have exceeded the numbers for last year. The work done in recent weeks has been rewarded by an incredible increase of all of the consumption of video products (both television and internet).

So, no problems? Unfortunately, it was not possible to avoid difficulties for some procurement chains. For example, the dubbing of TV series produced in other languages could not be continued. This problem, which is common to the entire industry in Italy, will have an impact on the finished product in the coming months. Another activity that was immediately interrupted was that of Medusa, the company that operates in the film distribution sector.

From the very beginning of the emergency in Italy, we also informed and transferred the experience acquired to our colleagues at Mediaset España, who unfortunately found themselves in the same situation just 10 days later. Our advice helped allow the Madrid offices to react more rapidly.

The coronavirus crisis has changed the Group’s organization and processes in these weeks, but we are aware it will also have more obvious effects in sectors that were already undergoing a period of structural change (such as media). I believe that the coming weeks will produce a quantum acceleration of this change. For this reason, together with the management of the emergency, the Mediaset Group has not stopped thinking of the future. Remaining a leader in the media sector after this storm has passed is a change that can be met by changing models, processes, and organization.

The changes that are taking place now in media consumption will leave a legacy to be dealt with, and the businesses not ready to face them risk suffering effects much worse than those provoked by these weeks of lockdown. Mediaset was involved in a process of supranational growth that once the crisis is over, will become even more indispensable to be able to quickly ramp up activities and maintain leadership in the media sector in Europe. Small operators will find it even harder to make it in the A.C. (after coronavirus) world; while scale was important before, it will be even more important afterwards. Mediaset had already decided to play the game on offense. The current crisis does not change this decision, but reinforces it.

Marco Giordani is the CFO of the Mediaset Group and Chairman of Mediaset Premium S.p.A., and CEO of R.T.I. 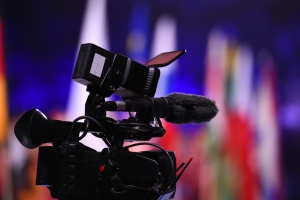