China is reconverting some of its economy to the production of masks, which has gone from 20 to 116 million pieces a day. This business can have destabilizing effects on global equilibrium. In the meantime, the Party is preparing a counternarrative on the non-endogenous origin of the coronavirus.

They are already calling it “mask diplomacy.”[1] Selling medical devices in the time of Covid-19 is highly profitable, and China is starting to convert its economy. In just one month, it has gone from 20 to 116 million masks a day. And that’s still not enough. The new business involves both state-owned companies and small factories, incentivized with subsidies and tax reductions, interest-free loans and preferential channels to obtain the necessary documents and approvals. The result?

Sinopec, that we could define as a state-owned multinational in the petrochemical field, has inaugurated two production lines for the manufacture of filtering fabrics suitable for masks.[2] By mid-April eight more will open, and every day they will supply the market with the material necessary to assemble 18 million surgical masks and 3.6 million ultra-filtering masks known as Ffp3. This material will be used principally in China, where there are already 2,500 converted factories, including the Taiwanese Foxconn, best known until now for producing electronic components for large brands such as Apple, Motorola, or Xiaomi.[3]

We see the strength of a planned economy here, that risks further undermining the already uncertain equilibrium of the current geopolitics. While various countries prohibit the export of these medical devices that are so precious during a pandemic, China, which has now passed the peak of contagion, offers itself as a supplier and a judge, to the point that the Foreign Minister Wang Yi has assured Italy it will have priority in stipulating contracts and supplies with respect to other European countries.

This is the same minister who no more than two weeks ago, wrote a long essay in which he described the epidemic as a “non-traditional challenge to security” invoking a “new international cooperation” on what he defined as the “medical silk road.”[4] The article was published by Qiushi (literally: Seeking the Truth), the biweekly magazine in which the highest political cadres of the Chinese Communist Party discuss theories on politics and government.

President Xi Jinping has also explicitly stated that the efforts made by China to stop the virus have not only served to protect the nation’s public health, but will also be a contribution to the development of global health. Propaganda, which the Americans would call “soft power,” is already underway. The more the number of infected in the world grows, the stronger the Chinese model becomes; leading us to forget Beijing’s negligent delay in addressing the appearance of the new virus.

Indeed, the first known case of Covid-19 appears to date back to November 17, 2019, and the Permanent Committee of the Politburo discussed it on January 7, but the population was informed only on January 21, two days before a region with 60 million inhabitants was put under quarantine. China is rewriting this history. On February 27, the doctor Zhong Nanshan stated in a press conference that although the virus appeared in Wuhan, “it may not have originated in China.”[5]

The 83-year old Zhong, is the epidemiologist who discovered the SARS coronavirus, to whom the Party entrusted the scientific response to this new epidemic. His position became the basis for the new official narrative. This was specified in an official statement by the Ministry of Foreign Affairs on March 4,[6] and one diplomat went even further: could it have been the U.S. Army that brought the epidemic to Wuhan?[7] 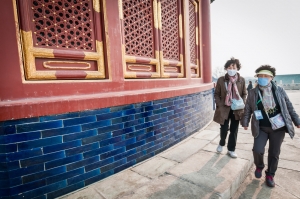