The Rise of the Third King

In recent weeks it has become very clear that the dollar is still the currency that monopolizes both real and financial transactions. In second place, although a bit faded, is the euro. But there is an unwelcome third party that wants to transform the battle into a three-way duel: it’s the yuan, whose rise is to be followed carefully.

In the weeks of the coronavirus, everything that has happened - or not happened - in American economic and monetary policy has immediately reverberated around the world, including through the channel represented by the dollar. It is no coincidence that the first coordinated action between the central banks of the United States, the European Union, the United Kingdom, Japan, Switzerland, and Canada was a dual intervention - the first on the 15th and the second on the 20th of March - aimed at strengthening dollar repo channels between the Fed and other central banks, both in terms of volumes, that have been increased, and costs, that have been reduced. The reason was the growing global demand for dollars, considered a safe harbor. The demand for conversion of financial assets denominated in other currencies created a lack of dollars. Note that no such agreements exist between the Fed and the People’s Bank of China. This phenomenon offers a good opportunity to take stock of the relationship between currencies, on the one hand, and real and financial exchanges, on the other.

Let’s start with an initial photograph: how many currencies are used today in real and financial transactions? A superficial economic analysis considering the world as a single market could produce the desire for only one currency: a single unit of account that everyone uses and accepts that would reduce transaction costs, with a beneficial effect on trade. Yet a more in-depth analysis would immediately recognize that in addition to the cost-benefit analysis we must consider the role of a currency as a tool of economic policy. The analysis would become complete only when we add the advantages that politicians perceive from having their own debt used as a payment instrument in exchanges between citizens, recalling that politicians’ time horizon tends to be short, due to ideology or elections. So monetary sovereignty is both an economic and political weapon, and since each country has its own politicians, since World War II the growth of the number of countries has been accompanied by a growth in the number of currencies.

Let us consider the current 203 sovereign states - 193 of which are members of the United Nations - and divide them into two groups. On the one hand are the countries that have given up monetary sovereignty de jure. These are countries that participate in a monetary union or that have an “anchor currency,” i.e. they have set a fixed and irreversible exchange rate with a currency issued by others, or they have even adopted the anchor currency as their own. Italy is part of this group. On the other hand, there are the countries that maintain monetary sovereignty. They issue their own currency, declaring that its external value is determined by the market, or if there is a currency anchor, is not fixed or irrevocable. There are 140 countries with de jure monetary sovereignty - 68 percent - that represent 87 percent of global GDP. This leads us to the common observation that global markets are currently characterized by flexible exchange rates.

Does de jure monetary sovereignty correspond to de facto reality? A country can formally declare that it maintains monetary sovereignty, but in reality its politicians may have an interest in maintaining a currency anchor, even if implicit and/or unstated - and thus revocable - for the gains it offers in terms of stability and credibility, or such a choice may be imposed by the characteristics of the country they govern. To identify a de facto currency anchor we need to look at the data, observing at least two different phenomena: if parallel exchange markets exist, that indicate that the actual exchange system is different than the one declared; and the actual and structural stability of its exchange rate, with respect to at least one of the possible anchor currencies.

An empirical study analyzed 195 countries in the period between 1950 and 2015, identifying not only the evolution of anchor currencies over the decades, but also current anchor currencies. In regard to the first aspect, there are two important points to note. On the one hand, the dollar gradually became the dominant anchor currency, starting in the 1950s. Two phenomena contributed to that dynamic: the decline of the pound sterling and of the French franc, and the collapse of the ruble. On the other hand, a new anchor currency emerged - the euro - that substituted the German mark, an anchor during the 1970s, and the French franc, to which various African francs were tied. In regard to the second aspect, the role of six potential anchor currencies was studied: the dollar, euro, pound sterling, yen, Australian dollar, and yuan. For each country, the importance of the currency is evaluated looking at the performance of the exchange rate, the denomination of official reserves, the use of the currency for international trade, and the use of the currency for the denomination of both public and private debt. There were two principal results. First of all, there were only four countries without an anchor, and thus with full monetary sovereignty: the United States, the United Kingdom, Japan, and Australia. Even the yuan is still anchored to the dollar. From this standpoint, the Italian debate of “in or out of the Euro” does not seem very relevant, since for our country the choice is only between an active or passive form of euro-ization. Secondly, the dollar has consolidated its role as an anchor, since it characterizes 62 percent of the 195 countries; the euro follows, with 28 percent, but with a decreasing role in recent years. The other anchor currencies pick up the crumbs. But we need to be careful: the official data for 2015 does not reflect what the yuan is becoming with China’s activism in every geographic region - starting with Africa - and in every financial sector, including the shadow banking system. King Dollar is still in full health, King Euro has faded a bit, but a Third King has begun a long march.

(Donato Masciandaro is a Professor of Political Economy at the Bocconi University, where he holds the Intesa Sanpaolo Chair in Economics of Financial Regulation. Since 1989 he has written for the newspaper il Sole 24 Ore. Since 2005, he has contributed to Economia & Management drawing on and developing his comments and analysis published in that economic-financial daily. 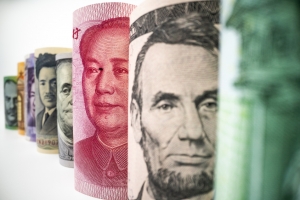