Not “A Woman,” But “Which Woman” as President of the Republic

Electing a woman to a public or private office is not a signal of progress per se. What counts are ideas, political experience, and career path. Yet the failure to elect a woman to the Presidency of the Republic puts the question of women’s access to top positions in politics and economics at the center of the debate. It’s an issue that cannot be addressed just with the introduction of quotas or generic appeals.

Saturday, January 29, 2022: President Sergio Mattarella was re-elected, for his second term as President of the Italian Republic. The election was characterized by the issue of gender and the question of “a woman at the Quirinale Palace.”

Some intellectuals and artists signed an appeal on this point, and many political representatives expressed the hope that a woman could be the new occupant of the Quirinale Palace.

The issue of gender broke into the news during the 1999 election in which Carlo Azeglio Ciampi became the tenth President of the Republic. In that election, a committee was founded that conducted a campaign in favor of the election of Emma Bonino, starting from her approval among Italian citizens as measured by some research institutes.

These two cases highlight some problems linked to how the question of gender enters the debate on access to top positions in politics and economics. The campaign in favor of Emma Bonino called for the election of a woman, indicating a first name, last name, and a specific career path. Yet it had the weakness of putting pressure on a system that does not provide a mechanism of candidacies for that position, and leaves to the electors, and indirectly to their parliamentary groups and/or political parties, the decision of who should be the President of the Republic. This was a unique situation in the history of the Republic: no committee had ever been created or election campaign organized for a male president. To present oneself as defending the constitution, when straining it at the same time, seems to be a paradox.

The 2022 appeal was limited to calling for the election of “a woman.” In particular, the appeal read: “Women have obtained esteem, trust, and admiration in the many public offices they have received, and we refuse to think that these women do not have the charisma, skills, abilities, and authority to express the highest form of representation and recognition.” In the appeal there is no reference to an actual person and no consideration of the ideas, political affiliation, or experience of the hypothetical candidate; today, “esteem” should not be all that counts – to borrow one of the characteristics cited in the appeal – but also how it has been achieved during the candidate’s career.

We have already dealt with this issue in regard to the election of Marta Cartabia to the presidency of the Constitutional Court. We repeat here the concept expressed then: electing a woman to a public or private position is not a sign of progress per se. Ideas count. Ideas are progressive or conservative, and we write this from the viewpoint of the rights this column focuses on, under the name of “Article 3.” The names that were published by the media during the week of the election were either indicators of a conservative political orientation (often contrary to the rights of the LGBTQI+ community, for example) or said nothing in terms of ideas and/or affiliation. For the good of women and minorities in general, it is therefore essential to assess the ideas of female candidates, and also male candidates, obviously. The election of Margaret Thatcher as Prime Minister of the United Kingdom in 1979 was not good for the cause of women, the LGBTQI+ community, and the lower classes in the United Kingdom. So there should be no more appeals for “a woman” regardless; it is better to work to create the conditions such that a good number of people, independent of their gender, sexual orientation, and so on, can rise to the position of President of the Republic. The person is more important than the social identity he or she bears.

But why is it hard for women to enter the list of potential presidents? It is hard because there are still relatively few women. In the current legislature there are 35, 11 percent of senators and 36.06 percent of deputies, and thus the pool to pick from is still small. Moreover, constructing a career that allows for developing a profile consistent with the role of President of the Republic takes time and far-sightedness. Some female candidates have made questionable statements and have participated in unsuitable events in the past, and this has affected their current profile. Others have a career path that is peculiar for the Presidency of the Republic.

It is curious that in recent days two women were cited as ideal candidates who did not become president in the past, because the times weren’t ripe. The women in question are Tina Anselmi and Nilde Iotti. Tina Anselmi was part of the Resistance, she became the first female Labor Minister in 1976, she was the sponsor of a law on parity between men and women in 1977, and she was the Chairwoman of the Parliamentary Investigatory Committee on the P2 Masonic Lodge from 1981 to 1984. Nilde Iotti was a member of the Constituent Assembly, she dedicated herself to the female question and the law on divorce, and was the first female President of the Chamber of Deputies, maintaining that position from 1979 to 1992. These are high-profile career paths that open the doors to the Quirinale Palace. For Tina Anselmi and Nilde Iotti, being women is more than an element of first-rate political experience. Their election would have represented a sign of real progress. Their careers, moreover, took place in the absence of targets and quotas, in a social context that was complex for women.

In this discussion, we would like to highlight the fact that the introduction of quotas and/or targets in public institutions and/or private organizations can improve the data on the female presence, from a quantitative standpoint and in the short term, and thus make the statistics look better, but it risks undermining women’s achievement in the long term and for top positions, where it is necessary to have a wealth of different skills (technical, managerial, and political) that are constructed over time. Therefore, if we want to elect a woman to the Presidency of the Republic in 2029, we need to start thinking about it now collectively and individually. 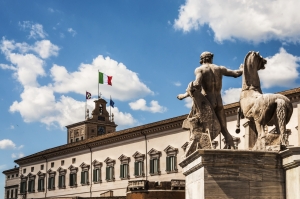