Violence Against Women Is Not Only Physical

Economic violence against women occurs through a series of behaviors that deprive the victim of her independence: financial isolation, control and absence of income sharing, loss of autonomy and access to family resources, dispossession and economic abuse. It is carried out with greater force when women don't work or have an extremely fragile position in the labor market.

With a circular letter of November 8, 2021, the Italian social security institute INPS illustrated the rules on the "Freedom Income," launching the possibility for women residing in our country to immediately request the benefit.[1]

What is the Freedom Income? It's a contribution granted to women who have been victims of violence to help them be financially independent. The benefit is an important signal, that comes right before November 25 – the International Day for the Elimination of Violence against Women – despite the fact that it is considered a one-off measure with a limited scope of action considering the range of potential beneficiaries.[2]

The Freedom Income has been instituted to combat economic violence. We know that, together with physical, sexual, and psychological violence (Article 3 of the Istanbul Convention) this more insidious form of violence exists, that is exercised as a form of blackmail: there is the intention to deprive the victim of her independence, for example preventing her from managing her own money or that of the family, controlling spending and payment instruments, but also from performing a professional activity.[3]

Economic violence takes place through an intensification of different behaviors: economic isolation, control and absence of sharing, loss of autonomy and access to family resources, dispossession and economic abuse,[4] and is exercised by the individual to maintain a lasting link with the victim.

To deal with this type of violence, various financial education projects have been developed over time (including one promoted by the Bank of Italy[5]) in order to enhance knowledge and favor greater awareness of the use of financial instruments. Obviously, this violence is harsher when women don't work or have an extremely fragile position in the market, especially in moments of crisis.[6] Together with other forms of violence, it is worse in a context where stereotypes, prejudice, and discrimination penalize and exclude women, placing them in a position of subordination or inferiority (we also recall that this year marks the 40th anniversary of the abolition of so-called "honor crimes").

Businesses are not immune from forms of violence or aggression,[7] as demonstrated by data gathered by ISTAT.[8] For this reason, in addition to promoting projects for financial education, they should work daily to construct open work environments and a culture of inclusive leadership, where any form of violence (and of tacit complicity supporting and perpetuating it) is in no way tolerated. 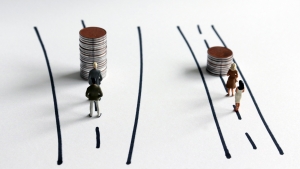