The Silence of Business on LGBTQ+ Issues

The main business associations said and did absolutely nothing before, during, and after the discussion on the Zan bill. For these associations, LGBTQ+ rights do not exist. At the level of single companies, we have to distinguish between a small group of "enlightened" companies and a large majority of others that resist addressing diversity and LGBTQ+ issues. The low level of interest on the part of Italian businesses and their management on the themes of diversity and LGBTQ+ inclusion stands out even more when compared to what is happening in the United States, where the activism of CEOs, even on "controversial" social and political issues, is increasingly widespread.

In June 2020, we concluded our traditional post dedicated to LGBTQ+ pride month with these words regarding the ups and downs of the "Zan bill": "Could this finally be it, after 23 years?"[1]

As we know, once again, this was not the time. The Italian Senate decided, by a secret vote, "not to proceed to examination of the articles of bill 2005, measures for prevention and countering discrimination and violence for reasons based on sex, gender, sexual orientation, gender identity and disability, already approved by the Chamber of Deputies (known as the Zan bill).[2]

So Italy still has no law that prevents and counters discrimination and violence for reasons based on sex, gender, sexual orientation, gender identity, and disability.

In these last two years, we have addressed the law and the role that businesses have and could play in this field. If a business wants to incorporate the values of diversity and inclusion in its organizational culture and human resources management policies and practices, it should be happy if the country in which is operates adopts a law that facilitates this task.

So what did Italian businesses do with regard to this law, and more in general, with regard to LGBTQ+ issues? Let us try to respond by distinguishing between the level of associations and that of single companies.

As we have pointed out repeatedly,[3] the main business associations did absolutely nothing before, during, and after the discussion of the bill. For these associations, LGBTQ+ issues don't exist.

In these companies, there are often internal networks in which LGBTQ+ issues are addressed, that last spring, informally discussed the bill. Yet there were no official and formal positions taken by these companies and their management. No public events were organized in which to assess the events around the bill, either. For example, in the "4 weeks 4 inclusion" events calendar, an initiative that brought together 200 companies,[4] there is no trace of events relating to the Zan bill in the titles and/or descriptions; although it is possible that the question was discussed informally in these events as well. But there was nothing official, and this is not just a detail. Furthermore, in social media, we did not see logos with the colors of the rainbow as we saw during LGBTQ+ pride month or posts that explicitly supported the bill or objected to its failure. This understatement, to use a euphemism, can be interpreted as a sign of low real interest on the part of Italian businesses and their management towards the issues of diversity and LGBTQ+ inclusion.

In particular, the silence of the CEOs of Italian companies is even more glaring if compared to what is happening in the United States, where the activism among business leaders, even on "controversial" social and political issues, is increasingly widespread.[5] This activism has effects on single companies (their identity, culture, and image), on internal stakeholders (workers), and external stakeholders (investors) and customers. In particular, taking a position affects the degree of identification of all of the actors in regard to the company, seen in light of the activism of CEOs. In some situations and contexts, not taking a public position means favoring certain interests to the detriment of others. The interests of LGBTQ+ workers and citizens have certainly not been favored by Italian businesses.

Some could say that it is not the duty of businesses and their CEOs to deal with politics and society.[6] If this is true, though, it should apply to all areas. In particular, businesses should avoid promoting merely superficial policies and practices during LGBTQ+ pride month. It is convenient to expose yourself in contests where you are certain to receive support and/or respect on themes that have been amply legitimized by society. For example, in the press release issued by the Young Entrepreneurs G20, there is a request to guarantee equal opportunity: "Eliminating gender disparity and the differences between urban and rural areas, in favor of greater participation of youth and women in leadership roles."[7]

The issue of equal gender opportunity is by now a broadly legitimized theme, at least in public discourse: calling for equal opportunity between men and women is not so new, as Simona Cuomo recently recalled on this blog.[8] Among other things, the Zan bill would have helped on this front because the law did not regard only sexual orientation and gender identity, but also sex, gender, and disability. And we know that on the question of gender much has been said, but little has been done.[9]

Among social movements, a visible reaction was seen only from the LGBTQ+ movement. What is the position of other categories protected by the Zan bill? What does the feminist movement, in its various forms, have to say? What do associations of disabled persons think?

The situation is different, though, as we have already seen, regarding labor unions, including the CGIL, that has always publicly expressed its support for the Zan bill: "Anti-discrimination actions in the workplace, already affected by the reform of Art. 18 of the Workers Statute in recent years, will continue to suffer from the absence of a law that decisively combats discrimination."[10]

With regard to the Zan bill, the political world did not put on a good show, both because it blocked approval of the bill, and because some senators and political parties rejoiced over the outcome of the vote. We must also say, however, that the world of business has been not up to its role. As we wrote above, it is simple to work in contexts without conflict, when everyone agrees, to affirm how great and convenient diversity is at every turn, and then, when important decisions come up, when it is necessary to take a position that satisfies some and disappoints others, turn a blind eye.

We would like to conclude this post by citing the coming-out of the Parliamentarian Vincenzo Spadafora, a representative of the Five Star Movement: "Those who have a public, political role like mine, have some extra responsibility. I decided to now say that I am homosexual for myself, because perhaps I learned too late that it's very important to love oneself and above all to respect oneself. […] In politics, this issue is still used to injure political adversaries, with those sordid background whispers that I have suffered from as well. I remain the man I am, with all of the personal, complicated path that each of us takes in our own lives."[11]

In this period, when people who occupy important positions in politics, economics, and society come out, it is important. On this front as well, Italian businesses are absent. Either there are no LGBTQ+ CEOs, or they are hiding. In either case, it's not a good sign.

So, in terms of rights, Italy is unable to take a jump towards the level of advanced countries, because it still does not have a governing class that is up to the challenge and businesses that are convinced of their interest to work on the question of diversity and inclusion, in both political and practical terms. Working on a cultural change is not enough: laws are important to support legitimacy, in order for there to be a triangulation between the cultural, ethical, and legislative levels. Let us hope that next year, there will be fewer lofty words and self-evident declarations. For the LGBTQ+ community – to cite a well-known Italian singer-songwriter who never came out - spring is late in coming. 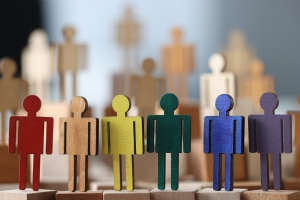