"Diversity and Inclusion" Are Not (Yet) the Business of the BoD

According to the results of a study conducted by the Diversity, Inclusion and Smart Working Observatory of the SDA Bocconi, ten years after the introduction of the "Golfo-Mosca" law, the theme of "diversity and inclusion" has not yet reached the proper level of attention in Boards of Directors. As a consequence, it does not seem that a transmission belt has been created between the BoD and the organization that could have more forcefully promoted gender parity at all organizational levels.

With the introduction of Law 120/2011, known as the "Golfo-Mosca" law, listed and public companies were obliged to introduce gender quotas in groups. Thanks to this law, the number of women on Boards of Directors went from approximately 7% in 2011 to 37% in 2020, and there has been a drop in the average age of BoD members, an increase in the level of education, and an increase of diversity in terms of professional background.[1] The "Golfo-Mosca" law has thus made Boards of Directors more balanced from a gender standpoint, reaching the goal set.

We know, however, that the aspect of gender parity from a numerical standpoint is only the tip of the iceberg of a much more complex issue, that of inequality and discrimination in the labor market and in organizations.

In fact, although in recent decades there has been growing attention to the theme of diversity and gender parity, Italy's position in the Global Gender Gap rankings highlights the persistent fragility of women with respect to men, both in terms of access to resources and in relation to labor market opportunities.[2] Moreover, at an organizational level investigations on the adoption of diversity and inclusion policies by businesses still show a spread limited to a restricted segment of companies,[3] a sign that the theme has not yet taken off in organizations starting from the top: the Board of Directors.

This is what emerges from a qualitative study conducted by the Diversity, Inclusion and Smart Working Observatory of the SDA Bocconi, in collaboration with the Valore D business association and sponsored by Generali and McKinsey, entitled "Governance and gender: the effects of the Golfo-Mosca Law."

In the context of the study, 100 female board members were interviewed (mostly having the role of independent members), along with 34 managing directors and/or chairpersons and some opinion leaders (chosen among journalists and members of important institutions) between June 2020 and February 2021.

Most of the people interviewed recognize that the Golfo-Mosca law brought "a breath of fresh air" to bodies characterized by closed networks, disrupting consolidated mechanisms for the selection of board members. A minority of those interviewed consider the law a strained intervention that has limited the actions of businesses, undermining the mechanisms of meritocracy and putting companies in a condition to have to "suddenly" choose a woman from a limited pool.

According to the majority of those interviewed, the contribution from women has been important to enrich the activity of the BoD in terms of: greater requests for transparency and examination of available information; stronger attention to compliance; a better ability to introduce new perspectives to face problems; and greater harmonization of relational dynamics. Overall, their contribution has been perceived as more effective in control activities than in business questions, also because the women who have joined BoDs often come more from the ranks of independent professionals or the academic world than managerial positions.

Before the entry into force of the Golfo-Mosca law, it was known that the strategic management of people (people strategy), which should also include "diversity and inclusion," was not an issue for the BoD. Although it was not a stated objective, there was the expectation that the entry of women would orient the debate in the BoD on the question of parity, tending to generate a cascading effect throughout the organization. This expectation was linked to the fact that, on the one hand, the entry of women had been supported by movements and trade associations; on the other, the idea had spread that an adequate presence of women in power (in line with the neoliberal feminist approach) would be able to generate a change of perspective.

The reason for this absent or still feeble commitment of BoDs on the theme is principally linked to the widespread belief that gender parity is a managerial issue to be dealt with by the managing director together with the personnel director. Another element not to be ignored, that has conditioned the contribution of women, has been the way of interpreting the role of female board member due to women's personal and professional history and the symbolic capital accumulated over time. It has not always been easy for women to express themselves on the issue. It depended on: the degree of freedom of action perceived in the BoD; the need to earn credit in a situation that, especially in the first terms of appointment, made the presence of women an obligation to be met, making them feel "out of place"; and lastly, the self-regarding approach that the introduction of the theme of gender parity by women inevitably entailed.

In any event, we learn from the study that, when it has been discussed, the theme has almost always been brought to the board as the result of work done in internal board committees, in a constant dialogue between the board members and management, and using the tools already available to the BoD.

So despite the fact that various locations and tools already exist within BoD activities that can stimulate debate, in these ten years of application of the law the issue has not been debated (or not fully). As a consequence, it does not seem that a transmission belt has been created between the BoD and the organization that could have more forcefully promoted gender parity at all organizational levels. It will be the pressure of institutional investors (through ESG criteria) that will push businesses to deal with the theme from a standpoint of sustainability. 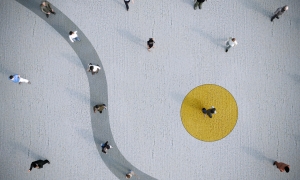