LGBTQI+ rights are increasingly becoming a political and geopolitical question. The companies that have promoted initiatives in support of pride month in recent days cannot however limit themselves to cosmetic initiatives in the countries where they are present, but must commit to adopting concrete diversity management measures. In Italy, despite the recent echo in the media, only 5.1% of total companies have done so.

The end of the month of June marks the conclusion of a series of initiatives and events dedicated to LGBTQI+ pride organized by associations and businesses. Starting in 2016 in particular, businesses have gradually intensified their policies and campaigns in favor of the rights of citizens/clients and LGBTQI+ workers. This is also evident through anecdotal evidence: it is sufficient to open LinkedIn to see logos colored with the rainbow flag, webinar announcements and sponsorships on themes of inclusion & diversity, and so on. Advertisements on the theme have also been broadcast, and many television networks and streaming platforms have dedicated space to LGBTQI+ themed films. In some cities, there have even been business events supporting pride month. All of this, though, still regards only a small minority of companies, as the data from the 2019 ISTAT survey shows: only 5.1% of total companies have adopted at least one measure, i.e. a concrete practice of diversity management for diversity of sexual orientation and gender identity  (4.4% of companies with less than 500 employees, and 14.6% of those with 500 or more employees).[1] Moreover, most Italian companies have an approach similar to the players on the national soccer team in regard to the Black Lives Matter movement: they move singularly or in small groups, they imitate without providing context, without being able to create a common voice through their most representative and/or influential associations. This is particularly true in regard to the events around the so-called Zan Bill, which we already discussed in another article in this blog.[2]

In relation to the legislative procedure for that bill, the month of June was characterized by the publication, in the Corriere della Sera newspaper, of a communication sent by the Vatican Secretariat of State to the Italian Embassy at the Holy See, which requests a "different modulation" of the law.[3] The conditioning of Italian society and politics exercised by the Catholic Church, through its various organizations, is nothing new: we saw it in regard to the approval of the law on Civil Unions, that, we must recall, does not remedy the discrimination against LGBTQI+ citizens. In fact, the law defines a civil union between people of the same sex "as a specific social formation pursuant to articles 2 and 3 of the Constitution" and does not reference article 29. It thus represents a form of segregation: "As for Blacks half a century ago [in the United States] – forced to use specific train cars and occupy particular places in meetings and public places – today in many countries [including Italy] gay and lesbian couples see the recognition of rights and obligations identical to heterosexual couples, but are forced, nevertheless, to sit in a separate car, dedicated to them and with a specific name."[4] So Italy not only still lacks a law against homotransphobia, but still does not have a law on equal marriage.

LGBTQI+ rights are not only a battleground between single states and churches, they also represent a source of tension along the fault line – some years ago we would have said the Iron Curtain – between West and East. At the European Council meeting of June 24 and 25, 2021, there was a discussion of the problem of the Hungarian law that prohibits the portrayal of homosexuality to minors, and 17 Heads of Government signed a public letter defending the rights of LGBTQI+ communities.[5] The Italian Prime Minister was among the signers of the letter. The Twitter account of the Italian Prime Minister's office stated[6]: "There is no place for hate, intolerance, and discrimination in our Union. This is why today, and every day, we are on the side of respect of diversity and LGBTI equality so that future generations can grow up in a Europe based on equality and respect."

Therefore, LGBTQI+ rights are increasingly becoming a political and geopolitical question. Companies cannot opt out of this situation, for various reasons. First of all, the conflict between laicity and religion does not regard only the state, but also business directly: how should a company behave when a conflict emerges between the rights of LGBTQI+ workers and clients and the positions of religious workers (Christians, Muslims, and/or others) who have a conflictual relationship with sexual orientation and gender identity? At a more general level, companies that call themselves " LGBTQI+ friendly" cannot limit themselves to cosmetic initiatives in the various countries where they are present. For example, returning to Italy, we hope that the law against homotransphobia does not meet the same fate as that on Civil Unions, and thus, is not weakened. If this should happen, though, all of those companies that have dressed their logo in the colors of the rainbow should make their voices and weight felt, otherwise their communication is only rhetoric and the webinars are only conformism. In essence, companies should behave opposite to the way the Italian national soccer team players are behaving, who we hope are not a "mirror of the country." 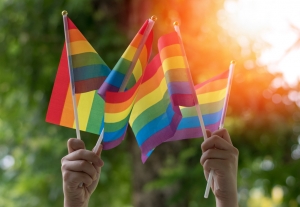