We are in a historical moment in which some people can choose where to live and work. Smart working, that should not be confused with the extensive forced remote working used during the pandemic, is in fact based on the possibility for the worker to choose where and when to work, in the absence of rigid forms of control. This solution, in the absence of spatial constraints, could co-exist with “south working” and the decision by many workers to move from cities to areas of Italy considered to be the periphery (towns in the mountains, the countryside, small villages, etc.), modifying the geography of work.

Since 2000, the Diversity, Inclusion and Smartworking Observatory of SDA Bocconi has studied the spatial and temporal flexibility of work, even before the term "smart working" began to be used. In recent years, that flexibility, which should not be confused with the different aspect of insecurity of employment relationships, has been an episodic phenomenon that has involved only a few organizations and a few workers within those organizations. As a result, from an academic standpoint we still have limited and partial results, that are often inconsistent with each other.[1] This is typical of managerial disciplines, that find themselves chasing after reality as it occurs. Thus, in this confused situation, what can be done is to offer models of analysis and interpretation, lenses through which to interpret the phenomenon of smart working as it develops. Obviously, to do this requires research experience, and cannot merely involve embracing the disciplinary trend of the moment. With this article we aim to establish some order in the debate, to make it more informed and aware.

The health emergency has imposed the forced adoption of remote working. This has become broadly necessary to allow companies to continue performing their activities and guarantee jobs for their employees regardless of the convictions they had previously developed on the efficacy and efficiency of remote working. It required greater technological, organizational, and managerial effort to very rapidly implement remote working – which in most cases coincided with home working – and immediately afterwards, to manage workers who found themselves working remotely for the first time. It is important to stress that the extensive and forced remote working used during the pandemic is not smart working.[2] For example, according to Law 81/2017, smart working is a mode of executing a subordinate employment relationship, by way of an agreement between the parties, that is carried out without precise constraints on work hours or location, and that assumes the use of technological instruments. It is a mode that is based on both the spatial dimension ("from any location"), and the temporal dimension ("when you want"). Smart working can be integrated with traditional work and/or substitute it in order to respond to the need to manage work-free time conflicts and is based on the idea that presence in the office and/or working during specific hours is not what counts in order to be a "good worker." So in order to qualify as smart working, work activity must entail a relationship with the organization based on responsibility in the absence of strict forms of control; a managerial style based on delegating, trust, and autonomy; the management of work based on goals and scheduling activities according to a project logic; maintaining an environment and sense of belonging through moments of exchange and discussion with the working group and moments of dialogue between superiors and the single workers to understand their needs and orient their growth and development. The culture of smart working thus does not allow for "forcing," but is based on the possibility to choose when and where to work with responsibility and in respect for the needs of both the organization and the worker. Smart working is never all or nothing: it can be based on alternating between times and places and/or the possibility to construct the spatial-temporal organization of one's activity ad personam. So it is a way of working that is fluid, dynamic, and sustainable for all of the actors involved.

One of the pillars of smart working is flexibility of space. This has focused attention on the fact that a worker can decide to work where she prefers, choosing not only between the office, home and/or another workstation (such as a co-working space, etc.), but also in a place far away from the organization's facilities. In particular, in Italy there is now discussion of "south working." During the pandemic, a non-negligible number of workers more or less forced to work remotely due to the lockdown decided to temporarily move to the regions of Southern Italy, close to their families of origin. According to a survey conducted by Datamining[3] on a sample of two thousand interviews, 85 percent "would go or return to live in the South if they could, and if it were possible to keep their job remotely." These statements, the subject of lively debate, criticism, and worries,[4] must necessarily be placed in the context of the organizational and cultural model promoted by smart working and by the process of digitalization that is massively affecting all organizations. Smart working does not entail control of the worker as regards the place where he performs the services, and from a spatial point of view, can allow for remote working and/or alternation between working in the office and remote working (hybrid model). From this last standpoint, south working would be possible if and only if organizations were to grant broad freedom and autonomy to their workers to choose where and when to work. A hybrid model that requires being present some days of the week and/or month – and thus a model that limits the worker's freedom and autonomy – would make south working more complex to organize and manage.

Like every process of innovation, it is useful to consider both the potential and the limits on all levels (individual, organizational, and social) and regarding all actors involved (workers, businesses, labor unions, cities, etc.), orienting managerial choices and public policies according to a dynamic perspective open to change. In this context, the decisions of both private actors and public actors are relevant.

In regard to workers and organizations much has already been written relating to the potential effects.[5] Here, it is important to stress that the risk of breaking organizational links can derive much more from insecure work conditions, outsourcing processes, and the adoption of a short-term perspective than from smart working. Since labor laws began to favor and legitimize job insecurity, there have been very few contributions by scholars on the risks of that dynamic. To do so now only with reference to smart working would be a bit late and a bit specious.

As regards cities, smart working combined with south working can modify the geography of work in Italy. Moreover, it may be wrong to speak only of south working, because the choices made by workers could regard other places considered as the periphery: the highlands, meaning mountain towns, and internal areas, towns with limited access to services, the countryside, etc. That is, it could regard everything that was considered marginal until a short time ago. The return of knowledge workers to the South and/or their territorial dispersion is a threat for the global cities that have made the ability to attract these workers one of the factors of their success, but it is potentially an opportunity for all the other cities and/or zones, that can improve their social capital. This improvement does not only mean more consumption and/or higher quality consumption, but also the activation of processes of social progress in a broad sense, that local communities must be able to seize upon. In order for this to happen it is necessary for there to be adequate infrastructure and services (telecommunications networks, transport networks, education and health services, etc.) and an inclusive social environment. We must not forget that people abandon peripheral areas not only for economic reasons, but also for social reasons. For their part, global cities must return to being attractive and sustainable, review their urban planning and real state approaches, and consider the cost and quality of life. We are in a moment when some people (recalling that smart working and south working regard only some professional categories, i.e. knowledge workers who work in specific sectors and generally have high salaries[6]) can choose where to work and live. Cities and villages, the center and the periphery, come into competition. We still don't know what the outcome of this process will be, but some positions of privilege may be called into question. Perhaps this debate also regards the fact that the region and city that before the outbreak of the pandemic were considered a point of reference for Italy, i.e. Lombardy and Milan, have shown their shortcomings, their managerial, organizational, and social inadequacies.

So we find ourselves at a moment of possible change. Today, we still do not know if and to what extent smart working will be adopted after the end of the pandemic, in what form, and where workers will choose to live and work. The task of those who study these phenomena is to provide a lens to interpret changing reality, stressing the negative and positive aspects, and shedding light on the interests at play. We will try to do it in this blog, as we have been doing for the past twenty years. 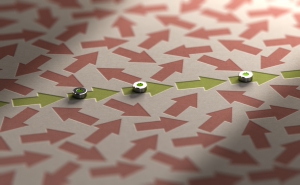