Equality It Shall Be, but on All Fronts

A sensation has been caused by the fine imposed on the City of Paris for not having respected gender parity in 2018 in the appointment of top civil service positions (directors and deputy directors): the city appointed 11 women (69 percent) and 5 men (31 percent). These appointments violate a regulation of the French Civil Service Ministry from 2013, based on which the same gender cannot exceed 60 percent of personnel. The regulation was then amended starting in 2019: organizations can exceed that limit, but only if it doesn’t cause an overall imbalance between genders.

As regards top positions, the City of Paris now essentially has a balance between the genders, because women are at 47 percent. Considering all of the positions, though, they represent 56 percent of employees, although the distribution is not uniform over different professions and duties: 40 percent of engineers in the technical services are women, and five percent of garbage collectors are women. The city commented on the fine as follows:[1] “It’s paradoxical to punish us for having taken measures that allow us to make up for being behind on parity.” This response, however, raises some questions: were the appointments made simply based on gender, and thus purely from the standpoint of a balance between men and women? If this was the intention, why wasn’t anything done regarding the percentage among garbage collectors? How is it possible that only five percent of them are women?

If we follow the logic used by the City of Paris, in the coming years only women should be hired as garbage collectors. Do they not think of garbage collectors because that is a dirty, stigmatized job, and thus isn’t very attractive? Moreover, if women make up 56 percent of the overall work force, this means that there are other professions and tasks in which women are decidedly the majority. What is being done to resolve this situation?

The fine imposed on the City of Paris allows us to discuss gender quotas and the presence of men and women in different positions and professions in a less simplistic manner. Public debate tends to focus attention only on the controlling positions and/or professions that entail power and prestige; while neglecting other professions and not taking into account the risks inherent in pursuing gender balance as an end in itself, divorced from other considerations. This is a parameter that should be monitored for all professions at all levels, without creating first-rate and second-rate jobs. If the goal is equality, it must always be present, whether in an office at the Hôtel de Ville of Paris, or for those sweeping the street below. 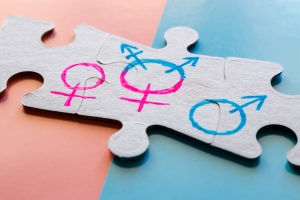