Gender Balance in the Time of the Pandemic

The debate on the asymmetric effects of the Covid-19 pandemic is becoming increasingly fervent and concrete. The statistics finding that the victims of the virus are principally older men with pre-existing conditions has fed the conviction that women are less affected, which isn’t entirely true. In reality, the data must always be interpreted in light of specific situations, otherwise the interpretation can be misleading. The fact is that Covid-19 has not only affected women harshly, directly influencing their health, but has also had many indirect consequences.

According to the latest UN Women report,[1] the lockdown and social distancing measures have led to an increase in episodes of domestic violence: requests for help have increased exponentially in every country in the world and the victim shelters that have stayed open despite the quarantine have reached their maximum capacity. These episodes of violence have unfortunately also affected women on the front lines of the emergency, such as doctors and nurses.

A second, not less important repercussion, regards gender differences in the labor market and in family life. Unlike in the 2008 crisis, which principally affected the manufacturing industry and thus male employment, the current pandemic has produced similar consequences for men and women,[2] while generating greater risks for the latter in the medium-term. First of all, due to the closing of pre-schools and schools, women have been busier with taking care of children and managing the home. The measures needed to contain the pandemic have in fact considerably increased domestic work, the need to care for small children, and to provide support for larger children using remote learning. This situation, which could have created a new equilibrium within families, has in fact weighed more heavily on the shoulders of women.[3] In addition to the strain of this work, there is the fact that grandparents aren’t available to take care of their grandchildren because they are at high risk of contagion and they themselves need help. Finally, some statistics show that compared to men, women are potentially more vulnerable in the labor market, with an overall job loss that could reach 54 percent of the total.[4] The virus is in fact significantly increasing the incidence of unpaid care, managed almost entirely by women.

Another sign of vulnerability – which is very evident looking at what has happened in Italy – was the very low level of involvement of women in the discussions and decisions on the management of the crisis and recovery. The first task force that assisted the government saw the presence of only 4 women out of 17 members, while the Scientific Technical Committee of the Civil Defense Department was initially made up of only men. Only thanks to multiple shifts in public opinion (including the appeals launched by 16 female senators in the pages of Corriere della Sera and the “Give us a Voice” campaign supported by various women in the world of politics and civil society calling on the Prime Minister not to forget women’s voices) was it possible to again recall the importance of having female representation in all decision-making and institutional contexts. A balanced presence of men and women cannot be seen as a second-level option, but has become a precondition for democracy and economic development.

The attention raised internationally on gender imbalances has had the great merit of stressing the key role that policy must play in managing the crisis and the recovery. As stressed by the “Gender Equality Strategy: Striving for a Union of equality” of the European Union’s Joint Research Center,[5] this crisis should represent an occasion to concretely ensure the complementary nature of the roles of women and men through the adoption of rebalancing policies aimed at guaranteeing cohesiveness in society as a whole. This requires a re-reading and new interpretation of traditional roles linked to the issue of caring for others. For example, in addition to expanding access to pre-schools, it would be advisable to fairly redistribute work and care commitments, increasing the gender-neutral dimension through the smart working policies that involved both men and women during the pandemic. 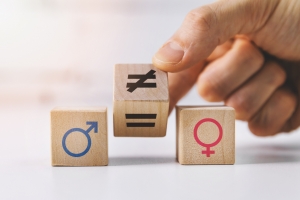