I Don’t Want to be Celebrated on March 8

It’s March 8, the day on which, since 1922, Italy has symbolically celebrated International Women’s Day, commonly known as the Festa della donna. This day, created to remember women’s economic, political, and social achievements, but also the discrimination and violence to which women continue to be subject, does not cease to provoke contradictory feelings and opinions. In fact, many women say that they don’t want to be celebrated on this day. There are two frequent reasons for this position. The first regards the need to be seen as considered people, not women. It’s the same reason some don’t want to participate in a female leadership course, but rather a leadership course in general; just like not wanting to be chosen for career promotions through affirmative action (quotas), but only thanks to professional qualifications.

The second regards the conviction that there is little to celebrate given that we are still far from reaching parity. Moreover, for years now, what happens on this day often does not involve reflection at all, despite the genesis of the date. The consumerist aspect of the holiday pushes the symbolic meaning into the background, and we see a display not everyone wants to participate in. It is very hard for anyone to understand and embrace a gender issue if behavior goes in the direction of dinners between women only, perhaps in a male strip club, receiving a box of chocolates or entering the stage of the web where borderline squalid posts, sentences, cartoons proliferate.

After removing this heavy blanket of the show, it becomes necessary to learn about and study certain questions; first of all, the historical and social motivations behind the creation of this holiday. Every rite, in both its symbolic and expressive function, includes the need to remind society of salient aspects of its history.[1] Personal and collective memory are necessary in order to evolve constructively without repudiating the past, from which normally, if we are familiar with it, we can continue to learn.

Secondly, it is important to recognize that gender is one of the spheres of social identity which cannot be avoided, because it is part of the mechanisms of social relations and interaction, of identification and personal recognition; and from this level of identity, social and professional roles are collectively attributed over time, to which expectations of behavior and relations arise, along with stereotypes, prejudices, and discriminatory conduct.[2]

Thirdly, it is important to understand that supporting and promoting equality and the acknowledgment of merit[3] implies the recognition of differences that, only if they manifest themselves, can be exploited and integrated. Starting with this, available resources can be distributed based on the different needs that different identities express.[4]

Lastly, while it is true that gender equality has not been reached either economically or socially,[5] March 8 “rings” a sort of useful bell to take stock of the situation and continue to ask what still needs to be done on the difficult road towards freedom and parity, and as women, to move collectively down this path. 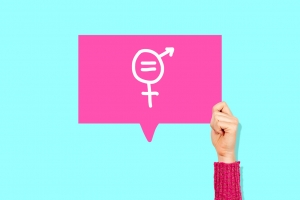