The Great Flight from China

The pandemic is merely accelerating a trend that has characterized the recent years in Xi Jinping's China. In the last decade the number of foreign residents of Shanghai has dropped by 20 percent, and the number in Beijing by even 40 percent. Furthermore, the severe restrictions on movement imposed by the government of Beijing on over 370 million people are pushing Chinese to consider the path of emigration from the country as well. The People's Republic is stemming this flight by limiting the issuance of passports and prohibiting all travel abroad that is "not strictly necessary."

It all began at the end of March. The approximately 25 million residents of Shanghai underwent mass Covid tests, and then, although the authorities had said it wasn't necessary, an unprecedented lockdown was implemented. One week later, the logistics of the most modern and cosmopolitan city of continental China were in total chaos. No food for citizens blocked in their homes by decree, medical urgencies ignored, families divided, nursing homes out of control, quarantine centers overflowing, illuminated 24 hours a day and without showers. General discontent on social networks, followed by censure. On the streets there were protests and flare-ups that were repressed harshly by zealous officials and anonymous Covid-19 officers in white protective suits. Things continued this way, and today, more than a month and half after the start of the lockdown, in Shanghai the idea of the future has been reduced to a historical minimum. Moreover, even though only this metropolis is on the front pages of newspapers around the world, at least 41 Chinese cities are affected by severe restrictions on movement, for a total of over 370 million people[1] and 40 percent of the country's economic output.[2] And in Beijing, that has avoided the most severe measures until now, the population is beginning to get scared, emptying the shelves in supermarkets.[3]

The images of what was once known as the Paris of the East show us a metropolis emptied of its citizens, fences built hurriedly between one building and another, migrant workers forced to sleep in tents, and riders unable to satisfy the too many delivery requests.[4] At a certain point, not even the large purchasing groups functioned anymore. Thus the government asked the population for "a week of silence": you can't even order online anymore, but have to wait for food provided by the government. Emigrating appears to be the only way to return to normality. And in fact the word itself, yimin in Chinese, hit a peak in online searches: 72 million times on WeChat on just April 15, 2022, compared to 16 million just a month earlier.[5] On Baidu, the Chinese Google, the topic "conditions for emigrating to Canada" reached the top spot in searches conducted with an increase of almost 3,000 percent, followed by "where is it best to emigrate."[6] Of course, it is probably only the younger, better-educated, and well-off part of the population that can afford it, and certainly not an easy plan to carry out.

First of all, you have to get a passport, which since last August has been subject to increasing restrictions with the excuse of avoiding the risk that returning to the country will facilitate what Beijing calls "return infections." To have an idea of the staggering drop in the number of Chinese who can go abroad, consider that in the first half of 2021 the People's Republic issued 335,000 passports, just 2 percent of the figure for the same period the previous year,[7] and that just last week, the Chinese authorities further tightened the rules by prohibiting all trips abroad that are "not strictly necessary."[8] At the same time, we are seeing an incessant exodus of foreigners from what, until a few years ago, was one of the most cosmopolitan cities in the world.

On the Chinese equivalent of WhatsApp, there are at least three "people leaving" groups formed by hundreds of individuals, divided between those who intend to leave in March, April, or June. The British Chamber of Commerce has estimated that international schools will lose at least 40 percent of their teachers before the start of the new school year in the fall,[9] and 85 percent of the respondents have considered the idea of leaving China precisely due to the measures implemented under the umbrella of the "Zero Covid" policy. This is the same reason why 80 percent of US companies there are having trouble attracting foreign personnel.[10] But de facto, the pandemic is merely accelerating a trend that has characterized all of the Xi Jinping years in China. According to the data collected in the official census of 2021, in a decade the number of foreign residents of Shanghai has dropped by 20 percent, and the number in Beijing by even 40 percent.[11]

While Beijing is the center of political power, though, in Shanghai business is king, and foreign companies make up 20 percent of employment in the city, 50 percent of the research and development sector, and 67 percent of total import-export value. This is an extremely high sacrifice on the altar of the "Zero Covid" policy, that for two years was the pride of the Xi Jinping administration, cited by the president himself to demonstrate the superiority of his government over Western democracies. And with the 20th Congress coming up, where he is to be definitively crowned, he certainly can't take back his words.

In the last meeting of Politburo Standing Committee, Xi Jinping in fact reaffirmed the intention to continue with this policy, and actually stressed that whoever questions it will be countered. Li Qiang, the secretary of the party in Shanghai, who has long been considered an ally of the president who would become one of the seven most powerful men in China, can merely accept this policy as if it were a "military order." But today his political future is being questioned; and with it the peculiarity of the city he governs. Shanghai is unlikely to go back to what it was. 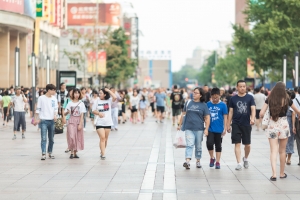