The New Nationalism of Chinese Consumers

Chinese consumers are increasingly following the path designed by their country’s nationalist policy, looking towards Chinese brands to satisfy their desires. This is why brands and influencers are attempting to conduct their advertising campaigns following the direction indicated by the government, that as everyone knows well, increasingly favors products made in China.

The golden age of the continuously expanding market beyond the Great Wall is over. The period that was a true driver for the most important Western brands – at least in the last ten years – is ending. Chinese consumers, who are young, attracted by novelty, and have growing spending power[1] – are following the path indicated by politics and increasingly look to Chinese brands to satisfy their desires.[2]

Patriotism, dual circulation, and the recent international scandals, such as that of Xinjiang cotton produced in detention camps that has forced Western and Chinese brands to take a position with respect to their reference markets, have completely transformed the panorama. The parabola of the most important Chinese influencer[3] – that originated with scouting done by L’Oreal and ended up promoting only Chinese brands – agricultural production in rural areas and government campaigns such as that against poverty or for typical products of Wuhan in order to revive the city’s economy devastated by the epidemic, say a lot about the current situation. And this is no coincidence.

The tendency towards consumption and everything that produces personal gratification is a distinctive trait of the Chinese population. It de facto represents the possibility to fully enjoy liberty and active citizenship, according to a logic that many define as “economic individualism.”[4] Tips for shopping, and the choice of brands and objects to wear and show in public, have become fundamental elements for hundreds of millions of young consumers to define their identity, and as a consequence, for brands that want to attract them. And this does not happen only for foreign brands.

Consider the case of Erke, a secondary brand that for over twenty years has operated in the field of Chinese sports clothing. Last July 21, following the devastation provoked by the floods in the Hennan region, the brand announced on its Weibo social account that it would donate millions of yuan to the areas affected by the disaster,[5] precisely like the better known (and richer) brands. Within one night, participants in its online sales went from a few thousand to 19 million. And in general the Chinese population appreciated the gesture to the point that just three days later, Erke had to communicate that it did not have enough products in its warehouses to satisfy all the purchase requests received.

On the other hand, Li-Ning, one of the best-known brands in the same sector, was harshly criticized and boycotted because, having offered a similar amount but having a notoriety and level of sales far above those of Erke,[6] had donated too little and too slowly. “As Hollywood movies have taught us, patriotism sells,” commented the professor of digital culture at the University of Pennsylvania Yang Guobing. Yet in this case it’s not only about patriotism.

Certainly, a sort of nationalist pride, that has always been cultivated by the communist leadership, exploded with the successful management of the pandemic, but on the other hand the measures used to keep the zero-Covid policy in place have increasingly closed off China. Since February 2020 practically all international flights have been grounded and the authorities no longer issue passports. In the meantime, the social environment has become increasingly toxic and users often know themselves that nationalism is the only subject that can incite emotions without the danger of incurring government censure.

Anyone who used Weibo or WeChat ten years ago was used to finding people who reflected politically on events and had fun getting around censure; now those people no longer express their opinions publicly (when they aren’t cancelled or banned for having posted sensitive content) and on social platforms those who remain are interested in a large audience to promote sales of their products. Thus it is not rare to realize that one who promotes nationalist content, such as the South Sea, is the same user who then tries to sell washers or beauty products. This is why brands and influencers are attempting to conduct their advertising campaigns following the direction indicated by the government, that as everyone knows well, increasingly favors products made in China. It’s a vicious circle that China seems to have no interest in interrupting, at least for the moment. 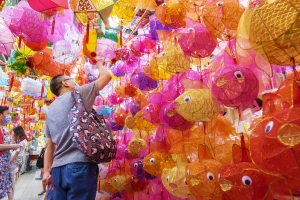