Economic Sanctions Against Russia: The Continuation of Policy By Other Means

The principal Western response to the crisis between Russia and Ukraine remains the threat of economic sanctions. The aim is to constrain and influence the behavior of the Putin government, but also of the banks and elites of Moscow. Prior experience on the effectiveness of sanctions at the international level suggests that, realistically, the most optimistic outcome at this point could be the freezing of the situation to gain precious time on the diplomatic front.

“War is a mere continuation of policy by other means. We see, therefore, that War is not merely a political act, but also a real political instrument, a continuation of political commerce, a carrying out of the same by other means.” Thus wrote the Prussian general Carl Von Clausewitz two centuries ago in his book On War, a treatise of military strategy widely read in the last century, also in Marxist and Leninist circles; to the point of becoming a part of the study programs of Soviet military academies in the years in which Vladimir Putin began his training at the KGB school in Leningrad (now St. Petersburg).

In those years, the current Russian president had already become a member of the Communist Party of the Soviet Union and had just received his degree in law, with a thesis on the principle of the most favored nation for international trade purposes. When entered into international treaties, clauses based on this principle bind the contracting states to mutually grant the most favorable treatment already given to others. It is a key principle of the system of international trade that revolves around the World Trade Organization, which Russia has been a part of for a decade.

The de facto unilateral suspension of most favored nation states can also become a continuation of policy by other means, halfway between diplomacy and war. It is a tool recently chosen by U.S. administrations in relation to China; it is the tool that the United States and their allies, with some differences, are adopting in these agitated days in regard to Russia in the event of an invasion of Ukraine. In the case of China, Washington prefers tariffs, i.e. import duties on Chinese goods and services; in the case of Russia there is threat of unprecedented sanctions, prohibitions and restrictions on the free international movement of goods, services, capital, and people, aimed at punishing, constraining, and more in general influencing the behavior of the government, businesses, banks and the elites in Moscow. Over the course of history, sanctions have repeatedly been used as a substitute for or in support of military actions, but their use has intensified especially after World War II spurred by the United States, the European Union, and the United Nations.

The question that emerges dramatically in these days if it sanctions can work, that is, if they can truly reach the goal of stopping policy before it becomes war, channeling the situation towards a negotiated outcome. Based on prior experience, the critics of international sanctions believe that they are often poorly-conceived, and in most cases, are unable to reach their goals. To the contrary, supporters claim that sanctions are effective and represent an effective foreign policy response to crises in which military action is not a practicable or credible option. From this viewpoint, sanctions offer a visible and potentially less costly alternative to military intervention or doing nothing.

The economic sanctions imposed in recent years on North Korea, Russia (after Crimea), Venezuela, and Myanmar illustrate the diversity of objectives, and pending the final outcomes, seem to provide support for the arguments made by both critics and supporters. Another example in this direction is the case of Iran. The United States and the European Union have used sanctions as a means to seek to convince Iran to negotiate on its nuclear program, to slow down its development and modify its internal policies regarding human rights. The first economic sanctions against Iran were introduced in 2006, to then be extended and tightened in subsequent years, both expanding the range of products involved and adding financial restrictions and travel bans for single individuals. Whether these sanctions have actually worked or not is the subject of debate, and it is probably too early to give a definitive answer.

Although this uncertainty of outcomes is true for many other critical situations at this time, we have recently begun to learn more, thanks also to the creation of the Global Sanctions Data Base, a data base that covers 729 sanctions episodes at the global level from 1950 to 2016. With respect to the publicly stated goals of those who imposed the sanctions, an interesting picture emerges. Until the mid-1970s, almost 50 percent of all sanctions seem not to have worked, implying a sanctions success rate equal to that of heads or tails in a coin toss. Since the mid-1970s, the success rate increased constantly, reaching a peak of 80 percent in 1995, if we consider total, partial, and negotiated success.

After 1995, though, the success rate began to fall again. This took place not so much because cases of failure increased, but because many critical situations became stalemates precisely after the imposition or threat of sanctions; stalemates that, like a medically induced coma, are not yet a success, but in any event allow for gaining precious time to prevent war from continuing policy by other means.

Gianmarco Ottaviano is a Professor of Political Economy at the Bocconi University, where he holds the Achille and Giulia Boroli Chair in European Studies. He writes for il Sole 24 ore and lavoce.info. For Economia & Management he expands on the comments and analyses published in those locations. 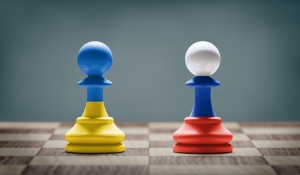