A Question of Management

In Italy, the somewhat failed management of this phase of the pandemic is not so much due to a lack of material or financial resources, but rather the inability to manage them. Therefore, there is a managerial problem, that will soon also regard the management of the Recovery Plan and any ESM funds, which the world of politics will not be able to avoid.

We are facing the worst period of the pandemic. This is the view of experts in various fields of medicine, and is stressed by many authoritative political representatives. We knew that this period would come, but as beforehand, we found ourselves unprepared. Not on all fronts, certainly; for example, masks and other personal protective equipment are now widely available. But many things have certainly not functioned properly: the tracing system based on the Immuni app, the long lines for tests, the local transportation systems in many regions, and so on. Why is this?

There are various reasons, but they often do not depend on the lack of material or financial resources, but on the inability to manage the resources available. The Nobel prize winner Amartya Sen had already pointed out that famines are often not the result of the scarce availability of food supplies, but of the fact that the resources don't reach the people who need them. In our case, it is not about economic incentives, but management and organization. So, unfortunately, it is a question of management. I write "unfortunately" because this has much more serious consequences than the lack of resources. Ultimately, management is one of the most creative tasks, or as Peter Drucker defined it, "the profession of professions, since it is the profession of organizing human resources." Poor organization means allowing forces other than reason – such as emotions, aggression, ignorance, or inertia – to shape reality. Since good management of resources generates more room for action, a lack of management in society does not entail only a waste of resources, but also fails to respect citizens' freedom.

Unlike in businesses, in which a new managing director or a new team of managers can bring new resources, this approach cannot be pursed at the government level, especially in a democratic society. It is important to always remember that, however participative, a business is essentially hierarchical and authoritarian.[1] In Italy, we unfortunately confuse the two levels, and often invoke the need for a single individual who can solve problems alone. That is, as in the times of Manzoni, we trust in providence, that should able to resolve the problems of two people such as Renzo and Lucia and allow them to marry, despite their naivety and ignorance.

In our country there is currently a discussion on the future management of the Recovery Plan (whether to entrust it to a task force of experts/administrators or not) and on whether or not to access the funds of the European Stability Mechanism (ESM). In both cases, in light of the considerations presented above, the debate is poorly posed. It is not a question of money. Training, development, and the use of intelligence: these are the only resources that count. There are no others. It is useless to have financial resources if they are not appropriately organized, and that management cannot be left to technocrats. The ingenuity of experts is indeed of little help if the challenge is not met by politics. The solution must in fact come from a political reawakening. Politics must be able to collect the capital of trust, and not exploit the capital of dissatisfaction. This is the underlying problem. It is not in the numbers, but in the spirits able to mobilize the necessary resources.

There is talk of the Recovery Plan as a new Marshall Plan for Europe. It would be better to compare it to the New Deal, when in 1936, President Franklin D. Roosevelt, faced with the greatest crisis of confidence of his people, stated that "this generation of Americans has a rendezvous with destiny." Today, the pandemic is bringing all of our problems to the fore, for the European Union, and for our country in particular. The time has come, if not to solve them, at least to address them. We also have a rendezvous with destiny. We must figure out if, at the very moment in which we risk losing all trust and courage, we are able to take responsibility, and are ready to meet the moment. 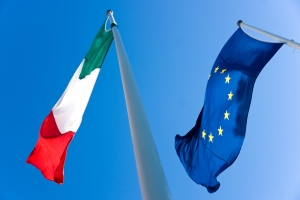