What Will Happen to the Entertainment World?

According to the latest SIAE yearbook, the losses of turnover recorded in the past year in the entertainment world amount to 847 million euros. This is a worrying figure both because it affects a sector with very fragile supply chains and characterized by insecure working conditions, and because many areas of the country risk cultural desertification, with consequences not only on the creative scene, but also on the quality of the social and economic life of many citizens. With the fear that the sector may follow an L-shaped recovery, great attention is dedicated to the numerous courageous attempts at innovation of formats, channels, and revenue models.

If there is one thing that Covid-19 has taught us, it is that organizations that deal with culture are also businesses, in the sense that they also have the problem of obtaining the resources necessary to survive and continue their activity. Even when they are publicly-owned or managed, the fact that they can continue to cover their personnel costs does not exempt those who govern them from making decisions regarding the most suitable configuration of processes, necessary investments, and the divestments that are the least painful and impactful on the continuity and overall value generated.

Therefore we should not be surprised, but rather be moved to reflect, by the decision made by the MoMA last April to terminate existing contracts with educational service collaborators;[1] or the Brooklyn Museum's decision to auction off 12 works to cover their operating losses,[2] a decision followed by a series of similar "deaccessioning"[3] operations; or also that of the Metropolitan Opera not to reopen for the 2020/2021 season.[4] We also must reflect on the decision of the municipal museums of Venice to reopen to the public after the first lockdown, on July 31 of this year, with respect to their counterparts in Rome that opened between May 19 and June 2. These are decisions that – in addition to having an obvious economic significance – also have a political, cultural, and symbolic meaning, but are heavily conditioned by available resources. From the standpoint of policymakers, we should not be surprised, but provoked to thought, by many people's reaction to the Prime Minister's Decree of October relating to the closure of cinemas and theaters, and the many appeals and reflections by cultural scholars and operators on the various dimensions of culture for our society.[5]

In this picture, the publication of data from the Società Italiana degli Autori ed Editori (SIAE) in the entertainment yearbook for 2019 and the comparison between the data relating to the first half of 2020 with that from the first half of 2019 (Table 1), on the one hand allows us to fully recognize the impact of the effects of the first wave of lockdowns on these sectors, and on the other, to imagine the implications that such a crisis can have in the near future on the economy and society.

It is well-known that SIAE is the main collecting society at the national level in Italy, and unlike its international counterparts, it represents and collects the fees accrued by artists and publishers that operate in a wide variety of sectors and channels: cinema, music, publishing, theater, sports, shows, concerts, discos, circuses, theme parks, television, and streaming. The data published refers to live shows, that have been harshly affected by the limits on circulation linked to the pandemic; the detailed nature of the data makes it possible to develop considerations regarding both different sectors and local areas.

Table 1 – Change in the number of shows, admissions, box office receipts, and public spending in the 1st half of 2020 compared to the first half of 2019. 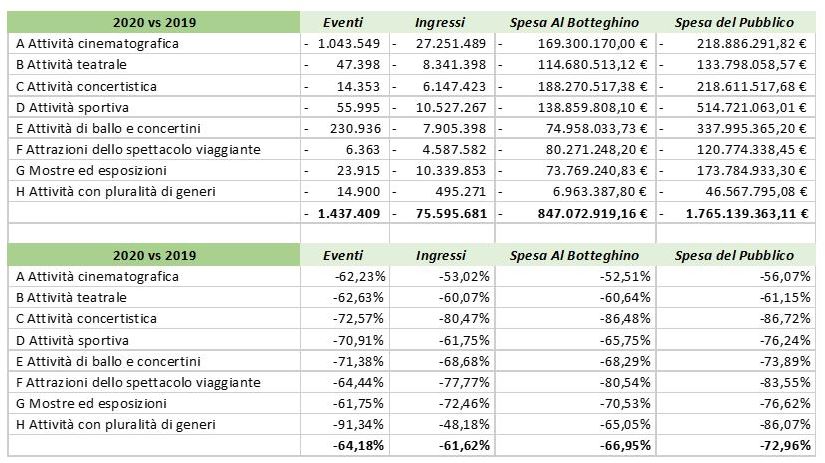 The first consideration is that 2019 was a year of growth in all sectors compared to the previous one, even though – from the 2008 crisis to date, and reading the data at the local, as well as the national level – we see a gradual reduction of the variety in the offering (in terms of the number of shows and operators), and of the number of significant sectors on a territorial basis. What was already happening before the onset of the Covid-19 pandemic was a gradual abandonment of smaller, less populated areas and a trend towards a gradual reduction of variety. What can we say now considering such negative changes? In the first half of 2020 there were still over 24 million people who saw films, 23,000 in-person sporting events, 428 million euros of box office earnings, and over 654 million euros spent by the public. But these results were recorded mostly in the months of January and February; and the figure for June shows reductions of from 65 percent for touring shows to 98 percent in box office receipts for sports.

The loss of sales (in sectors that are very fragile from the standpoint of the number of professionals involved and often entail insecure working conditions) amounts to 847 million euros; this is turnover that cannot be recovered. We are not anticipating a V-shaped recovery; we hope it will be K-shaped, but we fear it will be L-shaped. In any event, we expect that the areas of the country suffering from cultural desertification to expand considerably, depleting not only the creative scene, but also the quality of the social and economic life of many citizens. This would be a true disaster for all sectors, as well as for the quality of civic life. And the cost of making an area that has become desertified lively and attractive again, is enormous. Therefore, we look with great attention at the numerous courageous attempts at profound innovation in formats, channels, and revenue models, with the conviction that the benefits of a recovery in these sectors can be beneficial to society as a whole. 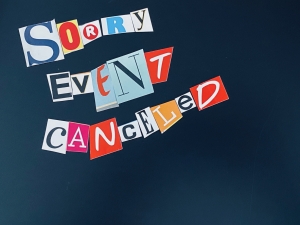