In the year that just ended, the European Central Bank (ECB) announced a green shift: from now on, monetary policy decisions will also take into account issues linked to climate change. This is an important but tricky challenge for the ECB, poised between the primary need to protect monetary stability, and at the same time, demonstrate its environmental sensitivity.

From the standpoint of European monetary policy, 2021 was an important year, with the announcement by the European Central Bank (ECB) of a revision in its strategy. The founding pillar is very clear: in accordance with the European treaties, the primary goal of monetary policy will continue to be the stability of the internal value of the euro. Given that primary goal, the ECB will have the secondary goal of supporting the other aims of the Union’s economic policy. In the list of secondary aims, the quality of the environment has appeared for the first time. Then, in a parallel document, the ECB confirmed its commitment to incorporate considerations linked to climate change in its monetary policy decisions. But what does this mean concretely?

From a traditional point of view, the relationship between the aim of protecting the value of the currency, in the medium term, and that of paying attention to the climate variable, in a longer period of time, is never conflictual, as the two aims have two different temporal horizons. The most recent economic analysis, though, has underscored that the macroeconomic dynamic and the environmental variable should always be considered from a synchronous, not sequential perspective. The reason is that attention to the climate must increasingly be systematic and daily, not sporadic and deferred. Because in general, there are at least three channels through which the climate variable can affect economic trends.

First: the climate variable can affect the trend of aggregate supply. To simplify, the effects of climate change are negative on productivity, with negative consequences in terms of volatility of prices and production. Second: it is necessary to take into account public policies, in particular interventions regarding taxation that are aimed precisely at combatting the negative effects of climate change. For example: the 25 euro increase in taxes per ton of CO2 implemented in Germany at the beginning of the year had an impact on consumption prices of 60 base points. Third: the effects of climate change can have an impact on financial stability. The transmission channel starts with the effects that environmental and natural disasters can have on risk levels of private enterprises and public institutions, it goes through the reflection of that increase of risk on the financial accounts of banks and financial and intermediaries and insurance companies, and ultimately reaches the responsibilities that central banks have in terms of financial stability.

Therefore, it cannot be excluded that in the near future, the ECB will have to face unpleasant problems to solve between the primary need of safeguarding monetary stability, and at the same time, demonstrating its environmental sensitivity. In those situations, tensions will automatically emerge between the so-called hawks, who are traditionally less sensitive to environmental issues, and the doves.

A method to overcome those tensions may be the use of the so-called “criterion of proportionality” to assess the direct and indirect effects of each monetary policy intervention. The criterion of proportionality is another new aspect of the strategic documents that the ECB announced during 2021. Its introduction reflects the discussion triggered, again in recent months, by the critical attitude taken by the German Constitutional Court with respect to the decisions of the ECB. But there is no doubt that proportionality can be an effective tool to achieve and explain a conduct of monetary policy that must be guided by a rule, but also be flexible. We must be careful, though: proportionality must not become the vehicle to violate the two pillars on which the efficacy of monetary policies depends; i.e. the priority of monetary stability and the independence of the ECB. To be clear: we must not allow politicians to use environmental issues in a specious manner as a Trojan horse to return to influence the production of public currency, which – as economic analysis and history teach us – must remain far from the influence of politicians, otherwise the green sensitivity of the ECB can become a double-edged sword. And this is not only a theoretical possibility. An example? Last April, the environmentalist organization Greenpeace focused attention on the new approach taken by the ECB at the beginning of the pandemic, as regards the policy of purchasing securities issued by private enterprises. In that policy, the need to increase the injection of liquidity led the central bank to lower its standards in terms of risk of the securities purchased. This choice – Greenpeace pointed out – benefitted companies that are significant polluters, such as Lufthansa, International Airlines Group, Renault, and Technip. The accusation comes on top of a previous report by various environmental organizations – including Greenpeace itself – which stated that 59 percent of private securities that can be used as collateral for ECB loans – for a total of 1.6 trillion euros – are issued by polluting enterprises.

The ECB’s choices are criticized based on two different criteria. First of all, they appear to be in conflict with the general goal of zero emissions, to be reached by 2050, that many governments and international institutions state they agree with. Secondly, they seem to conflict with the specific goal of monetary policy to be as neutral as possible.

The observations expressed by Greenpeace undoubtedly have the merit of showing how the green shift in monetary policy can in reality become a double-edged sword. On the merits, the crucial question is the following: using the criterion of proportionality, what do we mean by neutrality of monetary policy, when we introduce the issue of environmental impact? In the case of operations involving securities on financial markets, the principle of neutrality implies the macroeconomic goal of minimizing the assumption of risk: for those who must protect the value of the public currency they issue, it is unquestionably the first criterion. Then, the challenge becomes how to also calculate the microeconomic effect of environmental risk on the securities that the Central Bank decides to use for its operations, and to minimize it.

So the definition of supply of a green monetary policy assumes the ability to be able to calculate both the macroeconomic and the microeconomic effects. This is a dual challenge, that cannot be avoided. Otherwise, the double-edged sword risks injuring the one who wields it. 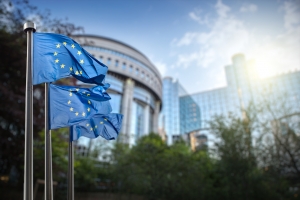