Brexit and the City

The British government is working on a series of reforms to ensure that London remains an important global financial center even after the divorce from Brussels. Not everyone in the City seems convinced of the government’s strategy, but there is agreement on the fact that, although the “golden age” is probably over, it will take time for another financial center to emerge as a true rival in Europe.

In Italy, we cut red ribbons at Christmas when we open gifts. Across the Channel, cutting red ribbons is an obsession that dominates public debate, reaching a fever pitch when the European Union is involved. Naturally, we’re not talking about the ribbons used for holidays, but of “red tape,” the term used in the United Kingdom to refer to an apparently infinite series of bureaucratic procedures that prevent the animal spirits of the market from giving free play to their creative instincts. The use of the term red tape comes from the fact that in the past, legal documentation was in fact bound with pieces of red tape. For example, it is said that in the 16th century, when Henry VIII sent Pope Clement VII sent about eighty requests for annulment of his marriage with Catherine of Aragon, the documentation was gathered and bound with a red ribbon. Still today lawyers follow the tradition of binding their legal documents with a pink ribbon that is called red tape.

For the supporters of Brexit, red tape is the capital sin of the European Union: excessive regulation and strict conformity to formal rules, considered redundant and often an end in themselves, that hinder action and the decision-making process in the economy and other areas as well. It is no coincidence that during the campaign for the referendum on leaving the European Union, Brexit was presented to the voters as a one-off chance to fuel the growth of the British economy with a bonfire of red tape.

So what better opportunity could there be for a sector such as finance, in which the animal spirits feel right at home? Probably none, and this summer the animal spirits have been hard at work, in many cases giving up their vacations, especially on the top floors of buildings in the City. Unfortunately, though, what they are dealing with is not the coveted bonfire, but a tangle of red tape. The cancellation of their summer holidays is due to the workload generated by a series of reforms planned by the British government to ensure that the City remains an important financial center even after the divorce from Brussels.

The reforms were presented in mid-June, the result of the work of a government task force led by the former conservative leader Iain Duncan-Smith. The task force’s report contains one hundred recommendations. Particularly important for the City is the suggestion to review the fee system, favoring investments by pension funds in private equity and venture capital funds to support innovative start-ups. The report in fact argues that the current system generates distortions in favor of passive investment in the stock market and to the detriment of activities with higher yields but more costly active management. The report also targets: the regime imposed on the insurance sector by the European Union Solvency II Directive, aimed at extending the Basel II regulations to the insurance sector, and the MiFID II Directive on markets in financial services, with particular attention to derivatives.

Not everyone in the City seems convinced of the government’s strategy of cutting red tape as a tool to prevail in the competition with the markets of continental Europe. Some stress that financial markets are global by their nature, and thus require shared international regulations in order to function well. In that sense, the rhetoric claiming that the United Kingdom is competing with the European Union for leadership on the continental financial markets seems to come more from politicians than operators in the sector. Many of the latter would prefer to talk about how to increase the size of the markets and thus have a larger pie to share, than spend their time adapting to new rules that risk reducing the size of the pie. The perceived risk is that of divergence between the rules of London and those of Brussels, a divergence that, by expanding the distance across the Channel, would merely generate useless fragmentation of European financial markets. This is the case of the so-called “passporting rights” underlying the European Union common market for financial services, by virtue of which the enterprises authorized to operate in any state of the Union can move freely in any other state as well. Since the beginning of the year, the financial companies in the City have lost those rights and now depend on the absence of any regulatory divergence between London and Brussels to continue to operate in a special regime of equivalency.

Other doubts about the government’s strategy to cut red tape come from the recognition of how the currently regulatory framework came about. Those in the City who have followed the events know that the United Kingdom played a fundamental role in designing the current European rules on financial services, such as in the case of the MiFID II Directive. Moreover, not everything that the British government presents as less bureaucracy, really seems to meet that description. For example, if on the one hand the aim is to make it easer to list companies in London, on the other, there is also discussion of reforming the auditing system, de facto increasing the bureaucratic burden on listed companies.

Lastly, there are a series of activities that, whatever the outcome in terms of divergence, are unlikely to remain in London. This includes, for example, the clearing of derivatives denominated in euros, an activity dominated by London clearinghouses. That euroclearing will move to the continent, or at least be regulated by European rules, is a natural outcome, given that the ECB must bear the risk of potential insolvency on the part of the banks involved.

So what will be the future of the City? An interesting perspective was offered in May by Howard Davies, the chairman of NatWest, one of the most important British banking institutions, former Deputy Governor of the Bank of England, chairman of the Financial Services Authority and director of the London School of Economics. According to Davies, although Brexit has for the most part cut the City off from the markets of the European Union, and he has few illusions of regaining easy access in a short period of time, the future of London as a global financial center still seems to be assured. However, although the City will remain the largest financial market in Europe, its “golden age” can be considered over.

That said, until now the debate on the future of the City has too often seemed to a be a dialogue between the deaf, with Brexit supporters convinced that nothing will change with respect to the past, and their opponents, who think that the City’s future will be difficult. By hindering the potential reallocation of personnel from the United Kingdom to the countries of the European Union, the pandemic is making it difficult to assess the trends underway. While it is true that exchanges of shares and swaps denominated in euros have moved to the continent, it will nevertheless take time to see a financial center emerge as a true rival on the continent.

Gianmarco Ottaviano is a Professor of Political Economy at the Bocconi University, where he holds the Achille and Giulia Boroli Chair in European Studies. He writes for Il Sole 24 Ore and lavoce.info. This For Economia & Management he expands on the analyses published in those two publications. 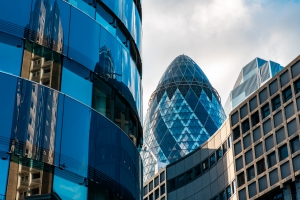