After Brexit: A (Still) Long and Winding Road

On December 31, 2021, the process that led to the United Kingdom's exit from the European Union was concluded. It was a long and winding road, whose completion, however, does not mark the end of the process of economic and financial decoupling of the Kingdom from the Union, but to the contrary, only the beginning. The reason is that the Brexit Deal, the agreement representing the culmination of Brexit, leaves many questions unresolved, which the two parties will continue to deal with for years to come.

The "long and winding road" (as the Beatles would say) of the United Kingdom's divorce from the European Union was begun over four years ago, and its principal stages have been summarized in a document that can be downloaded from the website of the Library of the House of Commons.[1] In a referendum held on June 23, 2016, the majority of voters chose to leave the European Union. On March 29, 2017, in a letter to the President of the European Council Donald Tusk, the conservative Prime Minister Theresa May formally activated Article 50 of the Treaty on the European Union (TEU), that allows each Member State to withdraw from the Union. The activation of Article 50 initiated a countdown of two years for the official exit of the United Kingdom from the EU (nicknamed "Brexit" from the beginning).

The initial idea was in fact that the United Kingdom would leave the European Union at 11:00 p.m. on March 29, 2019. However, following a vote in the House of Commons on March 14, 2019, the British government asked the EU to extend Article 50 to be able to agree on a later date for Brexit. On March 20, 2019, Theresa May wrote to the President of the European Council Donald Tusk, asking for an extension of Article 50 until June 30, 2019. Following a meeting of the European Council the next day, the leaders of the Member States (called the "EU-27") decided to grant the extension. On April 2, 2019, Theresa May announced that she would seek another extension, and offered to meet the opposition leader from Labour to find an agreement that could obtain the support of Parliament. In a European Council meeting of April 10, 2019, the United Kingdom and the EU-27 agreed to extend Article 50 until October 31, 2019.

In the meantime, though, on July 24, 2019 Theresa May was forced to give up her position of prime minister to her conservative colleague Boris Johnson, who on October 28, 2019 obtained one final extension of the Brexit deadline until January 31, 2020. On December 12, 2019, the Conservative Party again won the majority in the parliamentary elections, and Boris Johnson, confirmed as prime minister, reasserted his commitment to "get Brexit done" by January 31, 2020. On January 23, 2020, the 2020 law on the European Union (the "Withdrawal Agreement") received the consent of the Queen. Based on this legislative act, the divorce between the United Kingdom and the European Union took place just a few days later.

At 11:00 p.m. on January 31, 2020, the United Kingdom left the European Union and entered a period of transition, of slightly less than one year, characterized by difficult and tormented negotiations aimed at concretely determining the terms of the divorce, in a moment when, due to the Covid-19 pandemic, the governments of all of the countries involved had other priorities. Despite this, and although it went until the last minute, the negotiations produced the terms of an agreement, called the "Brexit Deal," that gives a structure to the future relationships between the two parties, avoiding a much more traumatic "No Deal" situation. At 11:00 p.m. on December 31, 2020, the transition period ended. The United Kingdom left the EU common market and the respective customs union.

The abandonment of the customs union allows London to pursue its own independent trade policy, without having to comply with the trade deals signed by the EU with its global partners. This independence has a cost, though, linked to much more difficult access for the British to the nearby markets of continental Europe. It is not a minor issue, since the EU, considered as a whole, is the UK's main trading partner. In 2019, exports from the UK to the EU made up 43% of the total, while UK imports from the EU were 52% of the total. Even though the portion of British exports attributable to the EU has fallen over time (from 54 percent in 2002 to 43 percent in 2019), Brexit will still create headaches for almost half of the volume of British exporters.

What type of difficulties are we talking about? An effective summary can be found in a recent analysis published by Bloomberg.[2] To dig a bit deeper, those who are interested in the details of the Brexit Deal can read all 1,246 pages, arming themselves with a great deal of determination and numerous cups of tea.[3]

Given the intensity and complexity of the economic relationships woven between the United Kingdom and the other members of the European Union, the Brexit Deal covers many aspects, including the exchange of goods, financial services, the "level playing field," disputes resolution, customs procedures, air and road transport, data flows, energy, professional services, work travel, taxes, agriculture, and fishing. We will take a selective look at some of the general aspects that are important for financial enterprises and companies.

As for the goods trade, the agreement ensures that most of the goods exchanged between the European Union and the United Kingdom will not be hit by new tariffs or quantitative restrictions. However, British exporters will have to face a series of regulatory obstacles or non-tariff barriers that will make doing business in Europe more costly and burdensome. The thorniest question regards what are called "rules of origin," based on which companies in the United Kingdom will have to certify the local origin of their exports in order for them to qualify for access to the EU common market without tariffs. In particular, there will be limits on the minimum percentage of British value added that must be contained in goods assembled with foreign components, in order for those goods to avoid EU tariffs. In this calculation, European value added will count as being British, providing some relief to those sectors that, operating through value chains, involve a production process fragmented among various European countries.

An example of this is the automobile sector, for which special rules exist. Gasoline or diesel vehicles will have to be produced with at least 55 percent local content in order to avoid tariffs. To favor the environmental transition, electric and hybrid vehicles can have up to 60 percent of foreign value added, but that percentage will decrease to 55 percent by 2026. Batteries can have 70 percent of foreign value added, but will have to decrease this level to 50 percent over the same period of time. Additional restrictions will be triggered by the control and certification procedures, to the extent that the absence of an agreement for mutual automatic recognition implies that the regulatory bodies of the United Kingdom will not be able to certify products for sale in the EU and vice versa, potentially a large obstacle to international trade.

To monitor compliance with the rules of origin on shipped goods, customs controls have been introduced at the borders between the United Kingdom and the European Union, although with a joint commitment to follow international best practices and reduce the related bureaucratic burden over time. However, to avoid the return of a guarded border between Northern Ireland and the Republic of Ireland that could trigger a resumption of the violent clashes of the past between the supporters of a united Ireland and UK loyalists, the customs border between the UK and the EU has been placed between the island of Ireland and that of Great Britain, that is, within the Kingdom itself. Internal customs controls of this type are usually only found in developing countries.

Yet, while the Brexit Deal at least partially protects bilateral goods exchanges, it does nothing similar for the flows of financial services, as the agreement offers little certainty for financial companies. The agreement contains only standard clauses on financial services, which means that it does not include any commitment on access to the common market. There is no decision on so-called "equivalence," that would allow companies to sell their services in the common market from the City of London. The United Kingdom and the European Union will discuss how to proceed on specific equivalence decisions, but the European Commission has said that it needs more information from the United Kingdom to be able to proceed, and at the time does not anticipate adopting new equivalence decisions. Greater commitments have been made on the subject of regulatory coordination, by virtue of a common declaration supporting enhanced cooperation on market control. A memorandum of understanding could be agreed upon by as early as March 2021.

The convergence on a "level playing field" was one of the most complicated questions of the negotiations. Both parties committed to maintaining their standards on environmental, social, and fiscal transparency and the defense of workers' rights, in order to avoid downward competition in an attempt to promote the competitiveness of their financial businesses. Unlike what was initially requested by the European Union, the Brexit Deal does not contain safeguard clauses, that would have de facto forced the United Kingdom to adjust its standards to the evolution of EU decisions. There is a rebalancing mechanism instead, through which one of the parties can impose tariffs on the imports of the other party in the event that the latter's standards become considerably less restrictive. Such measures must be limited in scope and duration to what is strictly necessary and proportionate to remedy the situation. Any retaliatory measures will also be subject to arbitration by an independent board, not the European Court of Justice, as the EU had sought.

Again in regard to the level playing field, the two parties commit not to using public funds surreptitiously to give their enterprises and financial companies an advantage. Both of the parties are prevented from providing unlimited state guarantees to cover the debts or liabilities of businesses and companies. Remaining in line with EU law, the United Kingdom may not save a company from bankruptcy without a restructuring plan, and any aid to banks in crisis must be kept to the minimum necessary to achieve orderly liquidation. Moreover, the United Kingdom and the European Union will have to publicly disclose all of the subsidies they decide to grant, to ensure transparency.

Thus many questions remain open, and new, unexpected questions will probably arise. As the Beatles song goes: "The long and winding road, that leads to your door, will never disappear. I've seen that road before. It always leads me here…" to the negotiating table.

[3] "Trade and Cooperation Agreement Between the European Union and the European Atomic Energy Community, of the One Part, and The United Kingdom of Great Britain and Northern Ireland, of The Other Part". 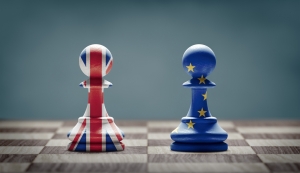