From Trump to Biden: What Changes for Foreign Trade?

With the change in president from Donald Trump to Joe Biden, the United States will reassert its centrality on the global political stage, uniting its allies around common goals. Yet those who expect significant discontinuity also in terms of trade policy could be disappointed

Although the transition is difficult, the world is preparing for a change at the top in the United States, from the Republican president Donald Trump to the Democrat Joe Biden. What can we expect on the international economic relations front once the transition is completed? The question was posed a few days ago by Hillary Clinton, secretary of state with Barack Obama and then the Democratic candidate in the 2016 presidential elections, on the occasion of the opening of the academic year at the European University Institute of Florence.

The premise is that before Trump, it was easier for the rest of the world to understand the American attitude in foreign policy. There was a Republican line and a Democratic line, but the desire of the United States to unite its allies around common interests was clear; just as U.S. leadership was clear on the related common actions. This clarity was obscured during the Trump presidency, whose election slogan "Make America Great Again" was immediately declined as "America First," reviving the motto of both Democratic and Republican administrations from between the two world wars, when they had pursued an attitude of neutrality with respect to European affairs.

Over time, "America First" became the label of an isolationist foreign policy, that the Trump administration translated into the systematic withdrawal of the United States from international treaties (such as the Paris climate accords or the nuclear agreement with Iran, among others) and from international organizations (such as UNESCO and the World Health Organization). Trump also attacked NATO and hindered the functioning of the World Trade Organization, weakening the multilateral approach to international trade and launching a unilateral trade war against China. The collateral effects of this war were felt by long-term allies in both Europe and North America. In brief, with Trump the United States, paradoxically, abandoned its role as a guarantor of a global order designed for the most part in its own image, and according to its biggest critics, an order which it had used for its own purposes since the end of the Second World War. "America First" quickly turned into "America Alone".

Will there be an inversion of the trend with Joe Biden? Hillary Clinton is certain of it. The Trumpian paradox will be resolved, thanks to a return to coherence and clear goals in foreign policy. Biden wants to return to the Paris climate accords and even to a somewhat modified version of the nuclear agreement with Iran. He will reassure allies that "America is back," stressing the importance of NATO and exerting leadership in the management of global problems, from climate change to humanitarian emergencies. Essentially, with Biden the United States will reassert its central role on the global stage, uniting its allies around common goals.

However, those who expect significant discontinuity in terms of trade policy as well, could be disappointed. First of all, although the tone was less polite and the actions were less thought out, Donald Trump continued along a protectionist trajectory that was already present during the Democratic presidency of Barack Obama, and strengthened after the financial crisis of 2008. Secondly, Joe Biden's economic program, made public during the election campaign, is clear, starting from the title: "The Biden Plan to Ensure the Future is 'Made in All of America' by All of America's Workers." From "Made in America" to "Made in All of America." The message is strengthened at the beginning of the document: Biden "does not buy for one second that the vitality of U.S. manufacturing is a thing of the past. U.S. manufacturing was the Arsenal of Democracy in World War II, and must be part of the Arsenal of American Prosperity today."

The Biden Plan develops along six lines of action, emphatically called Buy American, Make It In America, Innovate in America, Invest in All of America, Stand Up for America, and Supply America. The tools of action include massive interventions through industrial policy to support American business, and restrictions on international trade. On the industrial policy front, we see an ambitious program of public contracts to the benefit of American firms, the plan to eliminate the tax benefits that businesses currently obtain by shifting their production facilities abroad, and to introduce opposite incentives aimed at reshoring those activities, especially those considered critical for national interests. In terms of restrictions on trade, there is a notable emphasis on the desire to ensure that all commercial traffic between American ports take place only in American ships, built in America, with American crews. The strategy of decoupling of supply chains from China (and others) is also striking, along with the desire to insert social clauses in international trade agreements against imports from countries with lower labor protections than in the United States, in order to defend American industry.

Social clauses were recently entered into the United States-Mexico-Canada Agreement (USMCA), the trade agreement between Canada, Mexico, and the United States, that in July replaced the previous North American Free Trade Agreement (NAFTA) in effect since 1994. In the context of the USMCA, the signatories commit to prohibiting imports of goods produced with forced labor, while Mexico will be required to implement a series of labor market reforms to align with the higher Canadian and U.S. standards. A new "rapid response mechanism" allows independent experts to assess violations of workers' rights, with the possibility to impose targeted trade restrictions when such violations are confirmed. It remains to be seen if the USMCA model can be extended at the level of the World Trade Organization, given that developing countries tend to be reluctant to accept social clauses, considering them a limitation of sovereignty and a tactic to weaken their competitive advantages. For the same reason, American negotiators have traditionally viewed such causes with suspicion, and it is no coincidence that the rapid response mechanism of the USMCA requires any complaints against the United States to first be submitted to the American authorities, and only subsequently to independent experts.

All of these goals are being pursued by the United States in the name of national security, understood as the freedom to make decisions for the national good without interference or impositions from abroad. From this standpoint, the country's ability to maintain and develop the national economy is considered essential, with the conviction that in the absence of economic security there can be no national security, given that economic independence largely determines the autonomy of a nation.

A clear manifestation of the connections between economic security and national security is the constant attention that American presidents, whether conservative or liberal, have continued to dedicate to the question of Middle East oil. In the past, U.S. involvement mainly had the purpose of maintaining a stable flow of black gold, on which the American economy's functioning depended. Today that supply is less important due to the strategy of "energy dominance" pursued by the United States, aimed at increasing American production and export capacity on both oil and natural gas markets. The results are before our eyes: in 2017 the United States became a net exporter of natural gas for the first time since 1957; in 2019, the country also became a net crude and refined oil exporter, for the first time since 1949. Yet the desire of the United States to remain a protagonist in the Middle East has not changed. What has changed is only the reason for the country's involvement: no longer that of ensuring a stable flow of oil products, but rather to control prices, obviously from the standpoint of a country that is no longer a buyer, but rather a net seller.

On the issue of national security, the Biden Plan is clear: America no longer wants to depend on foreign suppliers for anything that could be of strategic importance in a situation of crisis. The risk, however, is that for the Biden presidency as well, national security can become a pretext to be used as necessary in the economic field, to discriminate against foreign businesses. It is in fact an exception that can be invoked by countries to legally derogate from multilateral agreements approved by the World Trade Organization. For example, Russia has used it to damage Ukraine's foreign trade. Little does it matter that national security was precisely the reason invoked by Donald Trump to impose unilateral tariffs on imported steel. Those tariffs hit not only China, but also other traditional allies such as the European Union, Turkey, Switzerland, Norway, Mexico, Canada, and India. These are countries that would do well to look carefully at some aspects of the Biden Plan, starting with the fact that, despite the harsh criticism of Trump's use of tariffs expressed during the election campaign, Biden's plan makes no reference to their removal. A word to the wise.

Gianmarco Ottaviano is a Professor of Political Economy at the Bocconi University, where he holds the Achille and Giulia Boroli Chair in European Studies. This article for Economia & Management expands on the analysis published in a recent article of his for il Sole 24 ore. 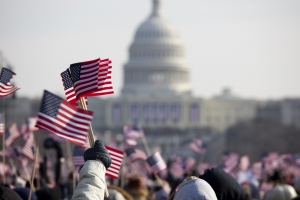