Pandemic, Money, and Debt: the Lessons from the Serenissima Republic

The arrival of a pandemic brings recessive effects that politicians must face immediately, even at the cost of implementing very aggressive and risky monetary and fiscal policies. To avoid exaggerating, today's politicians should learn from what happened in the Serenissima Republic of Venice between the 16th and 17th centuries

The two largest central banks in the world – the FED and the ECB – have shared a common hope in recent months: that fiscal policy will be effective. There is a substantive difference, however: although the heads of the two institutions – Powell and Lagarde – have the same problem, the COVID effect, Powell has an extra problem, the effect of the presidential elections, whoever the winner will be. The mix between the pandemic recession, politics, and money can lead to unforeseeable consequences, as the history of the Republic of Venice and its Bank show. The understand above all why the case of America is special, let us look at some numbers.

We will start with the exceptional effort expended by monetary policies in all countries to effectively respond to the pandemic recession of 2020. To measure this effort, let us look at the growth of monetary aggregates. This is a complex indicator, because its performance also considers the behavior of families, businesses, and banks, but it has the advantage of including not only what a central bank does, but also its most immediate effects, i.e. how much currency is in circulation. The latest available data tells us that monetary growth in the United States, Europe, China, and the United Kingdom has been 26.7 percent, 8.9 percent, 11.4 percent, and 11.3 percent, respectively. Furthermore, if we take just the last three months and annualize the figures, the growth becomes 71.4 percent, 21 percent, 10.8 percent, and 31.8 percent.

So all of the central banks are injecting massive amounts of money into the system, but the FED much more than others. Even taking a long-term perspective, the current growth of money supply is the largest recorded in times of peace: the average growth in the period from 1919 to 2019 was 6.6 percent. The monetary flood must be followed carefully, because it can produce three different effects, that are interwoven, but go in different directions. On the one hand, production can increase, which is good. On the other, consumer prices can also increase too much, meaning the prices of financial assets but also of real goods, such as homes. Consumer inflation and financial inflation are phenomena that can become very toxic. Until now the Fed's efforts seem to have dampened the real effects of the pandemic recession; at the same time, there have not been repercussions on consumer prices, but financial markets have become exuberant, and also volatile. The FED has injected liquidity in every way imaginable, but Chair Powell – as well as the president of the ECB Lagarde – know that the effect of monetary policy is not decisive, but can be frustrated by a lack of effective fiscal policy. This is why both Powell and Lagarde are hitting the accelerator in their public statements on the invitation to politicians to implement incisive fiscal policies.

Continuing to look at the United States, there has been a significant effort to respond to the pandemic recession. If we measure it in terms of public deficit, IMF data tells us that the deficit, compared to production, will go from 5.8 percent in 2019 to 15.4 percent in 2020, and will still be 8.6 percent in 2021; in 2020 the ratio between public debt and production will reach 131.1 percent. But the case of the United States is special also because there is a presidential election coming up, and everyone expects that whoever the winner is, there will continue to be an expansive fiscal policy. There is also the pandemic recession; and the mix between pandemic, politics, and money can be lethal. It wouldn't be the first time.

Let us go back a few centuries and browse through the accounts of the Serenissima Republic of Venice. There are some very interesting analogies. First of all, there is the relationship between pandemic, institutions, and politics. From the 1300s on, the Republic realized that there was a pandemic risk – the plague – and created institutions to manage it, such as the Health Superintendency. But then there was politics: declaring the risk of a pandemic can be politically unfavorable, because it means having to take containment actions – including quarantine – that generate economic costs. So politicians are reticent; this has happened in recent months with Donald Trump and Boris Johnson, but it also happened in Venice during the plague of 1575. Between the Superintendency that declared the presence of a pandemic, and the doctors who stated the contrary, the rulers – but also the people – preferred the negationist doctors, who expressed their hostility to the Superintendency. The markets didn't like quarantines, that hindered trade and production, to the point that people said "many more were lost from hardship than from the contagious disease." Yet given the presence of the plague, politics had to implement expansive fiscal policies – such as distributing provisions and increasing salaries – also to ensure that the difficulties from the quarantine wouldn't lead to riots: "Expect any sedition and cruel events". Thus, to increase approval, politicians are willing to increase public spending at any cost, including by exploding the public debt and printing money. This is what happened in Venice during the pandemic recession of 1629-31, when famine and plague hit the Serenissima hard. The Bank of Venice – the equivalent of our central banks – increased money production five-fold. The end result was a strong devaluation, that forced the Bank to suspend the convertibility of its currency.

The lessons from Venice don't end here. The more macroeconomic uncertainty is generated by COVID-19, the more demand for U.S. state bonds grows. At the same time, the expectations for European Union bond issues grows as well. The two phenomena have a common root: markets are hungry for securities without risk; they are called safe assets.

Seeking safe assets is a desire that comes from afar: no-risk securities are the Holy Grail in the evolution of financial markets; with positive aspects, but also negative ones. The yield on U.S. bonds continues to touch new lows, including with unusual dynamics. In August, for example, the day after the news that the Treasury Department would further increase its bond offer, yields on 10-year bonds dropped. This was an unexpected reaction, at least in normal times: if the offer of a financial asset increases, its prices usually fall, and thus yields rise. But these are not normal times. The general explanation is that an unsatisfied demand for safe assets exists, because there is the "price of tranquility," that increases when uncertainty rises.

What is happening? Safe assets cannot be absent from the portfolio of any prudent investor. To be more precise: considering all financial assets that cannot be used as currency, each of them can lose value for two reasons: because price levels rise (inflation risk), or because the issuer doesn't keep its promise to pay (bankruptcy risk). At equal inflation risk, a safe asset is one whose future nominal value is considered certain, because the issuer has maximum credibility. In order to hold a safe asset the investor is willing to pay the "price of tranquility;" in other words, the safe assets offers a yield of tranquility (not monetary remuneration) that other financial assets cannot offer. As a consequence, the monetary yield of the safe asset will be lower than that of all other financial assets, that instead reflect the risk of insolvency of the various issuers. The tranquility yield is also defined as providing "transparency:" to invest in safe assets it is not necessary to have particular information or knowledge, because their nominal value is considered certain.

The United States is only the latest example of a long history of public issuers that have succeeded in obtaining the price of tranquility for its bonds. Safe assets have become a sort of Holy Grail, that from time to time are identified with the debt of a credible issuer. The beginning of public safe assets can be dated back to issues by England between the 16th and 17th century. In reality, before those of England, there were the bonds issued by the Most Serene Republic of Venice, whose public debt was considered a safe asset, produced by a City-State with its accounts in order and a credible political class.

Coming back to today, in the last three decades, the exponential growth of the dimensions, complexity, and interconnection of financial markets has led to a growth in the demand for safe assets. The Holy Grail is needed, because its absence can create serious problems. This is what happened in the years prior to the Great Recession of 2008. Faced with a strong demand for safe assets, and a limited offer by the U.S. Treasury, the private market offered securities that seemed equally safe, given that rating agencies assigned them their highest level of reliability, Triple A. We all know how that ended. From that time on, the offer of public safe assets has grown, driven by the growing debt of the U.S. Treasury.

Yet the Holy Grail also has its unknowns. The increase of the volume of safe assets in investor portfolios can increase financial stability, provided that doubts do not arise regarding the stability of the issuer. If there is a crisis of confidence, though, the reallocation of portfolios that follows becomes a catalyst for instability. This has happened in the past, again in the Republic of Venice. At the beginning of the 1700s, the Republic's debt was so credible that it was de facto used as a means of payment, since the Bank of Venice transformed it into money. But then the pandemic recession came, as recalled above. Venetian public debt rose considerably and rapidly. The trust in the debt/currency as a safe asset deteriorated, and thus the search for an alternative safe asset began: coins made of precious metals. The Bank of Venice went into crisis, with the negative consequences we have already recalled.

What is happening in 2020? Today as well, the pandemic recession has led the United States to considerably increase its public debt, that has been and continues to be absorbed in investor portfolios. This increase keeps rates down near zero; a phenomenon that produces strong distortions in the long term. But is a crisis of confidence possible? Actually, an instantaneous crisis has already taken place, last March: yields on Treasury bonds shot up. The uncertainty of the pandemic was pushing investors towards the dollar, another asset issued by the United States, but with the advantage of being currency, and the easiest asset to liquidate was precisely state bonds. The Fed was forced to intervene, immediately and massively: the flood of liquidity calmed the markets.

Note that even the continuous increase of the offer of bonds can be interpreted as a possible problem for the Fed, that must be ready to intervene if the features of the bond offer are not in line with demand. At the same time, gold prices also rose, another item that can become a non-financial safe asset when uncertainty increases, just as happened at the times of the Serenissima Republic. The moral of the story is that the Holy Grail is necessary, but too much of it creates distortions. In the past the Bank of Venice realized this, today it could be the Fed's turn; along with others.

D. Masciandaro, "Historical helicopter money in a pandemic recession: The 1630 plague and the bank of Venice," Department of Economics and Baffi-Carefin Center, Bocconi University, mimeo, 2020. 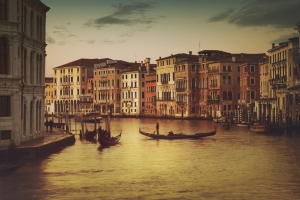