The discovery of an anti-COVID vaccine represents an obvious priority, but we must not forget that the ultimate goal is to end the pandemic. Since the necessary immunization is a global public good, governments, pharmaceutical companies, and multilateral organizations must collaborate to develop, produce, and distribute the vaccine

The events of recent weeks, from the start of the first wave of COVID-19 infections in some countries to the arrival of what seems to be a second wave in others, indicate that the world will have a hard time emerging from the current economic crisis linked to the pandemic if a safe and effective vaccine is not discovered first.

There is no precedent in human memory of the health and economic sustenance of so many people depending on a single healthcare intervention; and the hopes of so many people being placed in the hands of a professional category, that of scientists, that in recent years has been the target of populist rhetoric (as it consists of “experts”), especially (and in a certain sense paradoxically) in some of the countries hit hardest by the pandemic: from Boris Johnson’s United Kingdom to Donald Trump’s United States to Jair Bolsonaro’s Brazil.

The concrete hope is that a safe and effective vaccine can be available in the coming months, or in any event by the spring of 2021. Yet while the discovery of a vaccine obviously represents a priority, we must not forget that the ultimate goal is not so much that of discovering the vaccine, but putting an end to the pandemic. By definition, the epidemic will remain a pandemic as long as it affects most of the world’s population, either because of infections or simply because of the risk of infection. For this reason, COVID-19 can be considered defeated only when billions of doses of a vaccine have been produced at accessible prices and made available to everyone, even in the poorest countries in the world.

Many are of the opinion that this will not be possible if the production and distribution of the vaccine is left only to the free market. The reason is that getting vaccinated creates positive external effects. Those who are vaccinated obviously help themselves, but also help others: the unvaccinated because it reduces their likelihood of infection; the entire community because by not getting sick they free up healthcare resources, in terms of medicine, hospital beds, and personnel time, that can be used by persons with other health problems as well. Yet when a person decides individually to purchase and take a vaccine, she does not take these positive externalities into account, and thus they are not reflected in the price of the vaccine, with the result that the price ends up being too low in relation to the benefits it creates for the community. For this reason, the quantity of vaccine doses exchanged on the market will in turn be inefficiently low.

In the language of economists, we are dealing with an example of a "public good," that is, a good that has two properties. The first is that its consumption by an individual does not make it impossible for another person to simultaneously consume it. In this case we define its consumption as "non-rivalrous." The second property is that once the good has been made available to those who paid to consume it, it becomes impossible to prevent its consumption also by those who did not pay for it. In this case, we speak of it being "non-excludable." How is it possible for this to take place in the case of a vaccine? If I buy and take a dose of a vaccine, nobody else can use it (so rivalry exists) and even if I don't take it, someone else would have to get that dose from me (so excludability exists).

The explanation is that the public good is not so much the dose of the vaccine, as its effect on me, i.e. my immunization, which others can freely make use of (no rivalry) even if they have not contributed to paying for my immunization (no excludability). These are the two aspects that make the private sector unable to offer the public good of "immunization" efficiently: the market price of the good cannot fully reflect its benefit for the general public. Since the market fails in this case, the socially efficient offer of immunization necessarily requires public intervention.

There is an additional complication, though. In the case of a pandemic, public intervention in a single nation is not enough. The reason is that already discussed for an individual, but applied to a country. When a country vaccinates its citizens, it creates positive external effects also for the citizens of other countries. In this sense, it obviously does good for its national community, but for the global community as well. Suffice it to think of the contribution that an anti-COVID vaccination campaign at the national level could have in avoiding the sad spectacle of hoarding personal protective equipment and COVID-19 test kits as seen in recent months. Therefore, immunization is not only a public good, but a "global public good": only public action coordinated at the global level can lead to an efficient level of immunization. Since we are dealing with positive externalities in the context of a pandemic, the free market would not produce enough immunization, not only on a national scale, but on a planetary scale as well.

This does not mean, however, that public intervention can do without the private sector, for the simple reason that the latter offers skills and resources absolutely necessary for the development, production, and distribution of the vaccine. The discovery and universal availability of an anti-COVID vaccine represent such a significant enterprise that it cannot be completed without intense cooperation between the public and private sectors.

The argument that an efficient global level of immunization cannot be reached by a free market of vaccines, but also not be initiatives of only the public sector, is presented in an article published in Foreign Affairs by Ngozi Okonjo-Iweala.[1] The author is the WHO Special Envoy on Global Collaboration to fight COVID-19, and a candidate for Director-General of the World Trade Organization (WTO). She is also Board Chair of the Global Alliance for Vaccines and Immunization (GAVI), a global partnership that is both public and private, whose aim is to promote the access to vaccines, especially in poor countries. Among the other partners, on the public side we find the WHO, UNICEF and the world Bank; on the private side, the Bill & Melinda Gates Foundation. Among GAVI's activities in this period a recent initiative is particularly important, called Access to COVID-19 Tools Accelerator (ACT), with the participation of WHO and the Coalition for Epidemic Preparedness Innovations (CEPI), a public-private foundation with participation of the European Union, that collects funds to finance research on vaccines against so-called "emerging infectious diseases," that is, infectious diseases whose incidence has increased in the last twenty years. As regards vaccines, the pillar of ACT is called COVAX, whose aim is to accelerate the development and production of COVID-19 vaccines and guarantee fair and proper access to all countries in the world.

According to Okonjo-Iweala, neither individual governments nor large pharmaceutical companies can lead the efforts by themselves for the largest distribution of vaccines in history. Governments, pharmaceutical companies, and multilateral organizations must collaborate to develop, produce, and supply the vaccine. Producing and distributing billions of doses of a new vaccine would be difficult in the best of cases; doing it during a pandemic requires an unprecedented global effort.

To understand the dimensions of the challenge, just consider that a global shortcoming such as that of personal protective equipment and COVID-19 test kits has already been experienced in the case of vaccines. For example, the increase in demand for the HPV vaccine (against the papilloma virus) in developed countries recently prevented the vaccination of many vulnerable adolescents in developing countries. Analogously, during the H1N1 pandemic in 2009 (the "swine flu"), a small number of countries made large orders for the vaccine early, before it became available, thus hoarding most of the global supplies to the detriment of the rest of the world. This action recalls some of the attitudes of the current US administration in recent months.

In this sense, guaranteeing an efficient level of immunization and a fair global distribution of vaccines can seem a truly arduous enterprise. Okonjo-Iweala points out that a successful precedent exists. In 2009, GAVI launched the Advance Market Commitment (AMC) pilot project, an innovative funding mechanism similar to ACT, that has already contributed to accelerating the spread of vaccines. Before this project began, it would have taken more than a decade for the price of new vaccines, such as the pneumococcal conjugate vaccine (PCV), to fall enough to allow poorer countries to purchase it. The AMC has contributed to significantly shortening these times, making vaccines accessible to everyone and providing incentives to manufacturers to create a market where one did not previously exist. The idea was to make the funds available to guarantee in advance the price of vaccines once they are developed and authorized. This contributed to preventively removing the risk associated with investing in production capacity before having the vaccines and knowing the market price. This way, the production capacity would already be present when the vaccines are discovered. GAVI used a similar approach to accelerate the production of the vaccine against Ebola in time to prevent the recent epidemic in the Democratic Republic of Congo from going out of control. Although COVID-19 is a very different disease, the attempt was made to implement similar funding mechanisms to guarantee that vaccines are made available in an accelerated timeframe. To the extent they entail legally binding agreements with manufacturers, those mechanisms also help prevent the hoarding of doses by the richest countries and promote efficient access for all nations in the world. 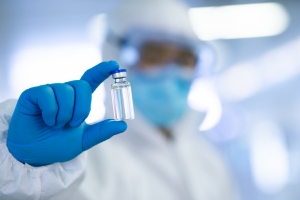