The world of work, not only in Italy, is going through evident transformations and changes – the development of remote work, the wave of layoffs that has affected different professions, the lack of labor in some sectors – and some pressing demands, such as the introduction of a guaranteed minimum wage and a reduction of work hours with the same salary. Based on some experiments, that reduction would also entail an increase in labor productivity. In theory, it would be possible to hit two birds with one stone: increase salaries and reduce working hours without decreasing productivity. More than understanding if this is possible, identifying a point of economic equilibrium between the various components (salary-hours-productivity), it is interesting to reflect on the social change of our preferences and the meaning and importance of work in people’s lives.

The world of work always occupies a central position in the economic and political debate, and that pre-eminence was also evident in the recent election campaign. As stated in Art. 1 of the Constitution, our republic is founded on labor, so it should be no surprise that this question is central in the national debate. This occurred in particular after the pandemic, in which the world of work was going through evident transformations and changes – not only in Italy: the development of remote work, the wave of layoffs that has affected different professions, and the lack of labor in some sectors. With respect to the rest of the world, though, in Italy there were also some reflections and proposals regarding salaries and work hours, not only for electoral reasons. These are not new issues, but some recent data from the OECD[1] brought them back to the fore. While in the last thirty years average annual salaries have grown throughout Europe (Germany +33 percent, France +31 percent, Greece +30 percent, Portugal +13 percent, Spain +6 percent), Italy discovered that it was the only country in which wages decreased, by 2.9 percent to be exact.

This stunning gap has, on the one hand, re-focused attention on the minimum wage: while in the EU twenty-one countries have a national minimum wage (going from 363 euros per month in Bulgaria to 2,313 in Luxembourg),[2] Italy, despite being among the top five EU countries[3] in terms of the percentage of workers in conditions of poverty (10 percent), is one of the few countries without such a measure. On the other hand, it re-opened the traditional reaction from those who explain that in Italy wages don’t grow due to low labor productivity. These explanations, however, risk justifying the current gap and leading public opinion to focus on a factor that is not really responsible for the situation. Low labor productivity does not in fact coincide only with employee performance (that is, when at equal means and skills the workers in some countries work less in terms of hours, and also greater effort in equal time), but also depends on external factors, both regarding business (the level of capital and instruments that they make available and how work is organized), and the broader context relating to the efficiency of the national economy in which the companies operate.

Many of the people who posit a connection between the wage gap and the labor productivity gap properly identify the definition and specify that it is not a question of Italian workers being lazy, and that other factors exist as indicated above. So although there is an attempt to avoid a situation where potential misunderstandings on the concept of labor productivity generate critical arguments in regard to Italian workers, the fact is – establishing a direct relationship – they justify the existing logic and reality. In fact, it cannot be simultaneously asserted that low labor productivity depends on the workers, businesses and national economic system, and that this explains (and thus justifies) the low wages of workers. That is, if the responsibility is collective, then it cannot be dumped on only one segment of people, who by the way work just as much, or more, than workers in other countries[4] (for example, France and Germany), penalizing them. So it is not correct to posit a unique and direct relationship between low worker salaries and low labor productivity in Italy. Thus we should avoid the positions of those who know perfectly how many “culprits” there are in the world but ultimately identify only one, because this is the way it’s done in mystery novels. Or, even worse, when it is specified that, although workers should not be considered guilty, it is not possible prevent them from going to prison. There is in fact nothing worse than condemning innocent people and simultaneously acquitting all of the other suspects. So we should not be surprised if this condition leads to tensions in industrial relations or a flight to populist solutions in the political world.

Linked to this theme is the reduction of work hours at equal wages. In this case as well, the proposal is not new. The pandemic, however, has not only pushed us towards greater flexibility in the organization of individual work (remote working) but has also changed our preferences between work and free time. Based on some experiments,[5] such a reduction would also produce an increase in labor productivity. So in theory we could hit two birds with one stone: increase wages and reduce work hours without damaging productivity. More than understanding whether this is possible, identifying a point of economic equilibrium between the different components (wages-hours-productivity), it is interesting to reflect on the social change of our preferences and the meaning and importance of work in people’s lives. That is, as a society do we have to strive to limit the time dedicated to work as much as possible, freeing up greater resources for free time? Or as has often been the case in these years, including rhetorically, should we seek to transform work into an almost playful activity that is so pervasive as to blur the lines between free time and work, to the point of making them indistinct?

For Adam Smith work was not a game at all, but an activity for which the worker must always sacrifice their rest, freedom and happiness, and in which wages are the consideration provided for those sacrifices.[6] If work is sacrifice, then it is proper that it be as brief as possible and limited in time. For Marx, “Adam Smith has only slaves of capital in mind,” and he would harshly criticize that universal conception of labor, limiting it to only capitalistic exploitation. Work is not only a curse, “but it is something else, too… It is a positive, creative activity.”[7] It is interesting that both of the perspectives are represented in two highly successful utopian novels of the period. In Edward Bellamy’s Looking Backward (1888), the protagonist wakes up in the year 2000 in a society where you start work at 21 years of age and end at 45, to then dedicate yourself to free time as gentlemen and gentlewomen in the well-off class of 19th century Boston. An opposite perspective is seen in William Morris’s News from Nowhere (1890), in which the author imagines a bucolic society in which work is a source of satisfaction and creativity.

Both of the novels were written imagining a distant future which we, however, should by now be directly experiencing. We can say that neither of the predictions came true. But the value of utopia is not in being prophetic, but in its capacity to lay claim to certain aspirations; aspirations that, in the case of work, are still extremely relevant today, after a great deal of time.

The dossier in this issue is dedicated to Real Estate, a sector that is being deeply affected by the dynamics linked to the transformations of the world of work, and where people will decide to work and live. The focus is dedicated to marketing and its challenges for a future time that is not a utopia, but a concrete horizon for all businesses. Enjoy reading! 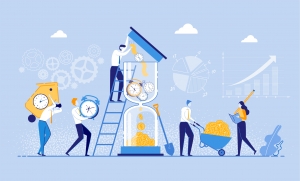