The Chinese Renaissance and the Winter Olympic Games

Unlike at the time of the 2008 Olympics, China today is four times richer and no longer interested in impressing the West with sparkling skylines and new-generation infrastructure. The success of these Olympics will not be measured by the medal count, but by Beijing's ability to demonstrate to the world that it has beat the challenge of the pandemic and is able to face an increasingly polarized global chessboard with its head high. Xi Jinping's goal is thus to restore China to its role as a great power, as it was in ancient times.

When the Olympic Committee assigned the 2022 Winter Olympics seven years ago, in Beijing there was talk of "airpocalypse": the Chinese capital and its region were at the center of global attention due to a level of pollution so high that the population was forced to stay at home and factories had to close. The tradition of winter sports was based on just a few years of experience and the dry nature of the area that was supposed to host the outdoor events was such that, despite the harsh temperatures, it very rarely snowed. President Xi Jinping put himself on the line: "We will keep our promises," and considering the experience of the 2008 Beijing Olympics, few doubted him. In fact none of the promises have been broken, but today the People's Republic is a completely different country, and this climate has also influenced the preparation of the Games.

The quality of the air has certainly improved considerably, and a new high-speed rail line has reduced from four to one hours the travel time between the capital and Zhangjiakou – the city where most of the outdoor events will be held. The rest of the events, though, will be held in stadiums and infrastructure built for the 2008 event (the Bird's Nest Stadium and the watercube) and the costs will be limited to 1.5 billion dollars. But the environmental impact still needs to be calculated.

In Chongli, the Cortina of the East, the number of ski stations has multiplied, and in 2019 winter tourists reached 2.8 million, compared to just 480,000 three years earlier. There is little precipitation, so they are producing as much artificial snow as possible. And not only on the slopes, because when the telecameras from around the world show the region, it must compete with the Alps; at least at first sight. It is calculated that two million cubic meters of water will be necessary, in an area that can normally count on one-fifth of the average water needs in the country.

In all of this, workers, volunteers, athletes, officials and journalists will have to live in separate bubbles due to the anti-Covid-19 measures, and nobody will be allowed to leave for the duration of the Olympics; it is even prohibited to meet your own family members. The sale of tickets is not open to the public, and daily tests and mandatory masks will be used in the attempt to guarantee the Chinese "zero Covid-19" policy. Isolation will not regard only health.

At least ten countries, led by the United States, have decided to diplomatically boycott the event to protest against the human rights abuses in Xinjiang, and the sponsors are so low-key that they seem almost to be ashamed of the visibility they have bought. In response, Xi Jinping will offer a gala dinner to open the Games. The guest of honor will be Vladimir Putin, with whom bilateral meetings will follow attempting to solve some issues regarding Ukraine, far from the North American sphere of influence.

China today is four times richer and no longer interested in impressing the West with sparkling skylines and new-generation infrastructure. In terms of international relations, it has gone from the Dengist theory of "keep a low profile and wait for the right moment to obtain results" to "Wolf warrior diplomacy." The success of these Olympics will not be measured by the medal count, but by Beijing's ability to demonstrate to the world that it has beat the challenge of the pandemic and is able to face an increasingly polarized global chessboard with its head high – and its own spheres of influence. It is no coincidence that Xi Jinping traces this edition of the Games to the "Chinese Renaissance," that is, to restore China to its role as a great power, as it was in ancient times. 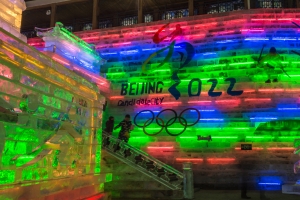