The Communist Party has approved a new official interpretation of history, that glorifies the president currently in office, called on to lead the country through many domestic and global uncertainties. Xi wants to restore the central historical geopolitical role of China and shake up the global order constructed around the leadership of the United States. But Xi Jinping has to guard against political enemies and at the same time manage a nation that is trembling under the effects of a deep crisis in the real estate sector, energy rationing, and increasingly widespread and powerful criticism from Western democracies. As if that were not enough, the new rise of the number of infections raises serious questions about the zero tolerance policy regarding Covid-19, that Xi Jinping had transformed into the pride of his authoritarian government.

Like Mao Zedong, like Deng Xiaoping. Actually, even more. Xi Jinping is the nucleus around which the party, the army, and the whole country must coalesce. And Xi Jinping thought is the only path to follow to pursue the Chinese dream and the rebirth of the nation. There can be no stumbles until 2049, when the People's Republic will celebrate the one hundred year anniversary of its founding. This is the sense of the "historical resolution" that closed the last important political appointment before the 2022 Congress, that which, if everything goes according to plan, will consecrate the perpetual leadership of the president. If anyone still questioned whether such a centralizing authority could truly strengthen the party and China, from now on this opinion will be considered an indicator of disloyalty or treason. It is the certification of the end of primus inter pares. It is no longer the country's economic growth that legitimizes the party, but he personal and personalistic leadership of a red prince.

For the third time in one hundred years, the Communist Party of China-CPC has ratified a "historical resolution." The first, in 1945, had made a clean sweep of those who dissented from the political vision of the Great Helmsman four years before the founding of the People's Republic. The second, in 1981, had smoothed the way for the policies of opening and reform of the architect of the new China, with a final judgment on Mao's actions: he had been "70 percent right and 30 percent wrong." There was official criticism of the leader in order to allow the party to survive, the personality cult was condemned and a drab collective management was promoted that guaranteed the organic growth of politics, economics, and society. "It doesn't matter if the cat is white or black," was the new slogan of the times, "as long as it can catch mice." But times have changed, and it was immediately clear that the role of primus inter pares was not enough for Xi Jinping.

To retrace and rewrite the history of the party and the most populous country in the world is a habit that the People's Republic has gotten us accustomed to. Controlling the narrative is necessary to control minds. This is how the party has survived itself in the last one hundred years. Mao Zedong's "class struggle" was substituted with Deng Xiaoping's "To get rich is glorious." Today there is shared prosperity and a strongman able to lead a superpower through the perils of domestic and global uncertainties. We have seen the heavy hand against the pandemic and the democratic movements in Hong Kong. And we will see how the question of Taiwan evolves. We must not forget that Xi Jinping is the son of one of the first companions of Mao Zedong and knows well the art of manipulating history to his advantage. It is no coincidence that quotes from Deng Xiaoping that warn against a single man in charge and those that encourage humility in international politics are disappearing from many texts.

The period of communism in China is "the most magnificent chapter in the millennia-long history of the Chinese nation," a glorious epic delivered into the hands of Xi Jinping that will be amplified in his "new era." In fact, since he took office in 2012, his efforts have all been aimed at re-establishing his control over the party, and that of the party over the state. By putting his thought into the constitution, he has ensured direct continuity with the founding fathers, and by eliminating the two term limit he has opened the road to govern for life. At the top of the second-largest economy in the world, Xi Jinping has strongly promoted unconditional faith in the leader, the study of his thought and the repetition of slogans, offending the intelligence of a middle class that is increasingly sophisticated and of his most seasoned officials. He is the strongman, he is hexin, "the heart and core" of the People's Republic, the top of a complex political pyramid in which the state and the party overlap, maintaining the borders of the empire that was. Xi wants to restore the historic central geopolitical role of China and shake up the global order constructed around the leadership of the United States. But while today the country is certainly more integrated, rich, and assertive than yesterday, inequality and contradictions are increasing, creating wounds that are becoming increasingly hard to heal.

In the secret rooms of Zhongnanhai, the Chinese Kremlin, Xi Jinping must guard against political enemies and at the same time manage a nation that is trembling under the effects of a deep crisis in the real estate sector, energy rationing, and increasingly widespread and powerful criticism from Western democracies. As if that were not enough, the new rise of the number of infections raises serious questions about the zero tolerance policy regarding Covid-19, that Xi Jinping had transformed into the pride of his authoritarian government. The leader is on the defensive; as is the country he governs. The policies of "common prosperity" and "double circulation" mark the road dearest to autocracies: autarchy. There will increasing be attempts to channel innovation from the private sector into an economic path designed from above and carried forward by the large public companies. There will increasingly be preference for national brands, and foreigners will be less and less welcome.

In the meantime, the purges inside the party and the fight against corruption for propaganda purposes have been extended to the armed forces, the world of culture, business, and large companies. And even if Xi remains the head of the state and the party, next year most of the men who now occupy the top positions in the party and the army will have to leave due to having reached age or term limits. What was managed collectively as a smooth transition of power after Mao, could turn into an underground, no holds barred war. Even if, as everything seems to indicate, the current president survives, when his time comes he will not be able to guarantee an orderly succession. Then the party will tremble, along with all of China. 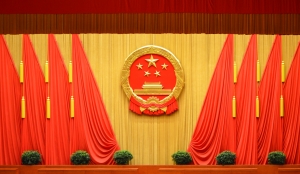