The New Chinese Web Celebrities, between Growth of the Digital Economy and a Government Squeeze

In 2019, the live streaming advertising market in China reached a value of 67 billion dollars, allowing dozens of Chinese influencers to make a fortune. With his 45 million followers on Douyin, the Chinese version of TikTok, Austin Li may be the best-known face on the web and the digital economy that has developed around social networks. But along with notoriety come government obligations as well. Li found himself promoting agricultural products from rural areas to collect funds for the government campaign against poverty, or typical products from Wuhan to revive the city's economy that was devastated by the epidemic. This is not an isolated case, and has the goal of generating continuous growth of the internal market.

What ever happened to the "lipstick king?" Is Li Jiaqi, also known as Austin Li, still able to sell 15,000 lip glosses in five hours of streaming, or does his work have to adapt to the new China of shared prosperity and the ban on effeminate looks? With his 45 million followers on Douyin, the original Chinese version of the social network that in Europe we know as TikTok, Li may be the best-known of Chinese influencers and the digital economy that has developed around them, known as the "Wanghong economy."

There is no doubt that Livestreamers, KOL (key opinion leaders), and new social platforms are rapidly changing the consumption habits of the Chinese, and especially of so-called Generation Z, i.e. the over 210 million individuals born between 1997 and 2012.[1] They have grown up in the China of one child and consumerism, they are digital natives and mostly optimistic, big spenders, and sophisticated. They know how to combine social and e-commerce platforms to obtain the products that best represent them, and they tend to copy the choices of their preferred influencers on WeChat, Xiaohongshu, and Douyin, whose use for purchases has increased by 600 percent compared to just four years ago.[2] For market analysis, they are an important segment of fashion and luxury product consumers.

But as always in China, costume follows politics, and it is important not to enter into conflict with the directives from the latter. The story of Austin Li is an excellent example that helps us retrace how the environment has changed in the last five years. Born in 1992 in a humble family of central China, he worked as a beauty consultant in L’Oréal stores until 2016, when the company decided to select some employees for livestream advice. He passed the selection process and moved to Shanghai. There he developed his talent in capturing the attention of consumers and the characteristics that still make him famous today: trying beauty products directly on himself and his preferred English phrase that rapidly became a catchphrase: "Oh my god!" He didn't hold back on anything. Once he succeeded in trying 380 different types of lipstick on his own lips in six hours of streaming.

It's not surprising that in a short time he built a court of fans who adored him, and that his face became among the most recognizable in one of the fastest growing sectors in the first decade of the 2000s. In 2019, the live streaming advertising market in China had already reached the incredible level of 67 billion dollars, and with the Covid-19 pandemic and the consequent frantic use of smartphones to pass the time, it only grew further. Last February, Li had become such a famous star that he was invited to the CCTV New Year's Gala, the program that sets records for viewership every year, exceeding one billion viewers this year.

But along with notoriety in China come expectations from the government as well: you need to be in line with Party directives and set an example. So Li found himself promoting agricultural products from rural areas to collect funds for the government campaign against poverty, or typical products from Wuhan to revive the economy of the city devastated by the epidemic.[3] And this year he distinguished himself for his efforts in promoting made in China products. In April he was invited to the Boao Forum, considered the Asian Davos, to speak of the rise of Chinese brands, and in his livestreaming events he promoted over 400 made in China cosmetic products, making a fortune for numerous domestic companies.

If until a few years ago the Chinese were willing to spend much more for foreign products, that they considered to be more tested and reliable, since mid-2019 the consumption of Chinese cosmetics has grown constantly, and now represents approximately 40 percent of those purchased by Generation Z. And it's not only "oriental beauty." As the recent case of Mercedes-Benz advertising shows,[4] even the best-known brands must make use of Chinese influencers to continue to exploit a market that, however large and expanding, is increasing closing itself to the outside, and focusing on "national chic" standards. 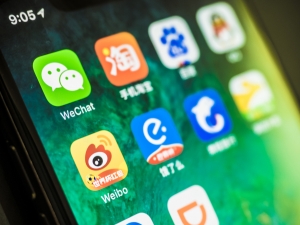