The Revolution Comes Lying Down

Living in a world where 996 (working from 9 a.m. to 9 p.m. six days a week) continues to be the norm, the young and educated generations of Chinese cities have begun a slow, peaceful resistance against the strenuous competition they have been accustomed to since they were school children. “Don’t buy a house, don’t buy a car, don’t get married, don’t have children and don’t consume” has become a sort of guide for this movement, called the “lying flat,” that is beginning to worry the central government, which in the increasingly direct conflict with the United States is counting heavily on internal consumption.

“If you can’t get up and you refuse to kneel, all you can do is lie flat.” It sounds like the slogan of a non-violent revolution, and it may be just that; at least in China. It all began with a post online last April: “Lying flat means justice.”[1] The author is Luo Huazhong, a young man who left his alienating factory job at 26 years of age to travel around by bicycle, and after returning to his home town, decided to share his new lifestyle: reduce consumption to the minimum and enjoy the little things, work only as much as necessary to earn what he needs to eat and have clothes, and then read, rest. “I can just sleep in the sun in my wooden bucket like Diogenes,” he concluded. And perhaps he had not anticipated the success of his reflections.

His post immediately went viral, triggering emulation and also ferocious criticism. “Don’t buy a house, don’t buy a car, don’t get married, don’t have children and don’t consume”[2] has become a sort of guide for the young and educated new generations in the cities, trained for strenuous competition from when they started school, living in a world where 996 (working from 9 a.m. to 9 p.m. six days a week) continues to be the norm, in a China that is growing slower and slower, and where social mobility has come to a halt. But certainly “lying flat” does not reflect the Chinese dream of Xi Jinping, who counts on the hard work and spirit of sacrifice of the Chinese people, and in the attempt to transform the economy of the most populous country in the world and avoid the risks caused by the pandemic and increasingly direct competition with the United States, relies heavily on internal consumption.

“In contemporary society every move we make is monitored and every action is criticized. Is there anything more revolutionary than simply lying down?” argued the writer Liao Zenghu in Caixin, the most respected economic weekly in the country.[3] And he explained that “lying down means resisting the cycle of horror,” that begins with the pressure suffered in school and ends with a job with no limits on hours. Thus, within a few weeks all of the state media began to address the subject, but from an entirely different standpoint. The daily Nanfang defined this new philosophy as “shameful” because “youth must trust in the future” and “the only happy life is that of working hard”;[4] the news agency Xinhua contrasted the image of the young doctors who worked without interruption during the Wuhan lockdown, without acknowledging that they are part of the new generation of Chinese,[5] and that all of the articles, posts and memes that attempted to understand, explain and spread the philosophy of lying flat have disappeared from the internet in China.

“The lying flat community is not good for the social and economic development of the country,” wrote the Beijing daily Guangming, that however also tried to reflect on the condition of youth, suggesting that “if we want to cultivate their diligence, we need to improve the quality of their life.”[6] This is certainly one of the points to be taken into consideration, because the lying flat movement does not come from nothing. Last year, the Chinese web had dusted off the word “involution,” to stress that the extremely competitive environment does not lead to the growth of the individual and society, but the opposite, as can be imagined in a harsh battle to secure limited resources. In 2017, there was discussion of apathy and lack of motivation, or of reaching financial independence only to retire as soon as possible. In short, as the 36-year old Zhang Xinmin says in his song: “lying flat is the way to go, the antidote to 966 and losing your hair. A world day of lying flat could save the planet.”[7] 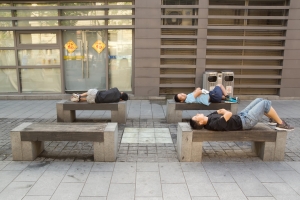