Strict lockdown, widespread tracing through smartphones, and mass testing: these are the pillars of Beijing’s strategy to combat the second wave of Covid-19. A winning combination which has allowed the country’s economy to grow even faster than expected.

"If 300,000 people had died of Covid in China, how would the West have reacted?" The editorial in the English-language version of the People's Daily[1] leaves no doubt regarding the feeling of superiority in the People's Republic with respect to the management of the pandemic in the rest of the world. Especially today, with five vaccines in phase 3, four of which have already been approved for limited or emergency use,[2] and a plan to vaccinate 50 million people by the start of February. The government in Beijing wants to be ready for the Chinese New Year holidays, that in 2021 fall on February 12. Two doses are to be given by January 15 and February 5, respectively, and the hope is that the two vaccines produced by Sinopharm and Sinovac can be on the market starting next April. And in November 2020, the president of the leading (state) pharmaceutical company stated that his vaccine had already been injected into a million Chinese with no side effects, although without the results of the last phase of experimentation being made known.

In the meantime, we are seeing images of citizens free to travel around the most populous country in the world without being required to wear a mask (on the street, that is, because it's still mandatory on trains and planes). Life seems to have returned to normal: open schools and bars, and compulsive shopping in the hope of making up for the drop in the demand for products in the rest of the world. According to official data, the new daily cases can be counted on the fingers of one hand, and are mostly "imported." The People's Republic has not stopped testing millions of people in just a few days whenever there is a hint of a new outbreak, nor requiring quarantine for anyone who enters the country, in a hotel at their own expense. A tracing system has been active for months on every citizen's smartphone; it assigns a color according to the exposure to risk and thus determines people's ability to move around.

Slightly less than a year after the explosion of the new coronavirus epidemic in Wuhan, Beijing is demonstrating that it learned a great deal from the experience at the start of the millennium with SARS. Strict lockdowns and widespread tracing are the pillars supporting the recovery of the Asian giant, which saw over 600 million people travel during China National Holiday week in early October, without this causing a second wave. Yes, there were some limited cases, but it appears that nothing got out of control. The case of the metropolis of Qingdao is exemplary: on October 11, three new positive cases were recorded, triggering tests for almost 11 million people in five days, that identified a total of 12 positive cases that were isolated immediately.[3] This mass testing has already been replicated in various other areas of the country.

This is part of the reason why the economy is growing – according to official data – even faster than expected. Industrial production, investments, and consumption have been pumped up by stimulus and targeted policies that for the moment seem to be working,[4] although an increasingly fierce clash is taking shape between the government (and thus the Party) and the technology giants, that for the first time the government is attempting to regulate with an anti-monopoly law.[5] If China has succeeded in bringing the epidemic under control so quickly, it is not only due to its ability to mobilize the masses and the authoritarian structure of its political system. The shift to digital was already in a more advanced phase than ours when the epidemic broke out, as is artificial intelligence applied to the control of the population. All of these technologies have been used in order to limit infections, and for the moment they seem to have worked. As for the origins of the pandemic, the People's Republic keeps repeating that it could have come from outside of its territory, even though they have finally authorized a World Health Organization mission to the country. It should start next month, but it is not yet clear how the WHO will reconstruct what happened in Wuhan a year after the fact. Nor will the investigation be able to provide new elements on how and where the species jump took place, and the location of the first centers of infection.[6]

[3] "Rapid response to an outbreak in Qingdao, China", The New England Journal of Medicine, December 3, 2020. 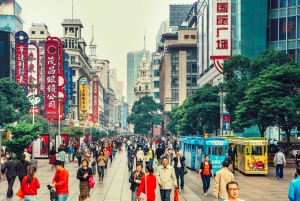