According to state media, in 2017 the Chinese government had already installed 200 million video cameras around the country equipped with facial recognition systems

The market for surveillance technologies will have a value of 62 billion dollars by 2023 (1), and it seems that in this field as well, China will be dominant. Eight of the ten most surveilled cities in the world are in the People's Republic (2) where facial recognition is already used in many rail stations, banks, airports, in some school buildings, many hotels, and in subway systems. And that is not all: starting this month, whoever wants to a SIM card will be required to submit to a facial scan (3). This is the result of an ambitious government program launched in 2017 (4) that foresees covering the majority of the population by 2020.

So as Western democracies move to establish legislation to protect their citizens' privacy, Chinese technology is sold in much of the world. According to an analysis by IHS Markit, almost half of the global market linked to facial recognition was already traceable to China in 2018, and that market grew +13.5 percent over the previous year, compared to only +5 percent in the rest of the world (5). According to a study by the U.S. NGO Carnegie Endowment for International Peace (6), at least 52 governments – 36 of which have signed the Memorandum of Understanding of the Belt and Road Initiative (7) – are experimenting with those systems in their own countries.

These technologies are managed by companies such as Huawei (8), Hikvision, Dahua, and SenseTime, some of which have tested their algorithms on the population of Xinjiang, the far western Chinese region with a Muslim majority where at least one million people have been placed into "re-education camps."(9) On paper, it's all justified by the Made in China 2025 plan: if the aim is to ensure a smooth transition for the second-largest economy in the world, there must be a transformation from manufacturing hub to technology producer. And innovation today means 5G, smart cities, artificial intelligence, and facial recognition.

In order to be properly developed, facial recognition must be tested on people with various types of somatic features. This is why the companies involved sign strategic partnerships throughout the world, from Zimbabwe to Venezuela, from Australia to Myanmar, and so on. Huawei, whose presence has been defined as a threat to national security by the United States, sells video surveillance devices in approximately 230 cities around the world, and according to the cited Carnegie report, has already trounced all competitors.

In 2017, Chinese state media had stated that with 200 million video cameras assisted by artificial intelligence, China had already constructed the largest video surveillance network in the world. In fact, even the Chinese have started raising questions. A survey conducted in October and November by the Nandu Personal Information Protection Research Centre of Beijing (10) showed that 80 percent of a sample of over six thousand people feared that the data collected with video surveillance could be stolen and then used by criminals. Despite this, more than 60 percent of that same sample agreed that it was a rather convenient system to guarantee safety on the streets.

The Chinese police have the largest database of faces in the world, with over a billion people registered through identity cards, and if the quality of the picture is good, it is possible to check them against those scanned on the streets and in stations. The experimentation of the "social credit" system also raises fears that in a not-too-distant future each single action of each individual will be examined by the state. If for most Chinese this total lack of privacy is only a way to push citizens to behave better, for us it is a concrete example of the dystopian society described by the British TV series Black Mirror. 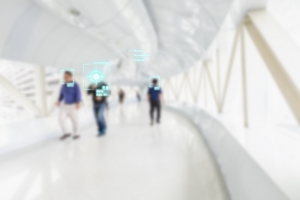