If Beijing Goes to War (against Pollution)

In 2017 the Communist Party decided on a green shift, and large enterprises and citizens have followed the path indicated by the government.

The smog of large Chinese cities no longer makes the front pages of the newspapers. And this time it's not due to censure. According to a recent report from the UN, emissions in China have fallen by 70 percent since 2013, and atmospheric pollution by 36 percent (1). How did this happen? The political will was enormous, and goes under the slogan of "Environmental Civilization" launched by the Communist Party of China in 2007 and revived by Xi Jinping as a war against pollution. Coal-fired heating has been prohibited, factories have been moved outside of cities, and the most heavily polluting companies have been fined. Moreover, targeted investments in renewable energy have brought consumption from such sources to a level that is now 40 percent higher than in North America, and almost triple that in Germany. Of course, given the country's thirst for energy, this represents only 4 percent of the total energy consumed by the Asian giant. But it is still a trend that, in the last 5 years, has seen year-on-year growth of 25 percent. If the increase were to continue at this rate, as written in the plans drawn up by the Communist leadership, in 2025 China would produce 20 percent of the total of renewable energy. This would be a considerable achievement, to which other measurements must be added as well. In fact, the People's Republic is currently seeking to shift its transport model to mobility based on rail and electrical vehicles. Investments in high-speed trains and subways are unequaled, as is that in the electric vehicle market: in 2017, 500,000 vehicles were sold, compared to 200,000 in the United States and Europe combined. And China's shift to green doesn't stop here.

The population is also slowly recognizing the need and importance of protecting the environment. According to a report prepared by the China Chain Store & Franchise Association, over 70 percent of the Chinese population understands the need for responsible consumption, with 30 percent firmly believing that personal habits have a direct impact on the environment (2). A national survey in 2017 found that over half of the respondents were willing to spend more than 100 yuan a year to combat carbon emissions, and the large delivery companies are adapting to this change in mentality, which is extremely important (3). In fact, in 2017 alone, packaging was responsible for over 1.5 million tons of waste, mostly plastic. And estimates suggest that packaging from delivery companies exceeded two million tons in 2017. Yes, China recycles about one-fourth of its plastic, but the reality is that Blue River dumps more plastic in the sea than every other river on earth. A 2015 study placed the quantity at 367,000 tons (4).

In June of this year, the Meituan-Dianping company – one of the many Chinese groups that purchases sites for the delivery of food, consumer goods, and retail services - launched the World Environment Day, a crowdfunding campaign that in only 24 hours succeeded in collecting one million yuan to be allocated to a special state fund to combat pollution. Since 2017, Alibaba has started using only biodegradable packaging. Jack ma has also decided to divert 0.3 percent of his annual proceeds to a fund for the environment. In addition, with the foundation led by his company, he has developed a project dedicated to the protection of water resources. Tencent and Huawei have also stepped up, investing large sums of money in environmental education. Tencent, specifically, is working with the WWF on a project on "digital-driven ecological protection," and has invested over 1.9 billion dollars in American cleantech startups. Not to mention the fact these technology giants are the same ones leading the development and experimentation of electric vehicles.

The environmentalist bent of large Chinese industries is surely driven by a sincere interest in safeguarding the environment, but the government's efforts certainly must not be underestimated. The leadership has decided on a green shift, and large enterprises and citizens are following the path indicated by the government. 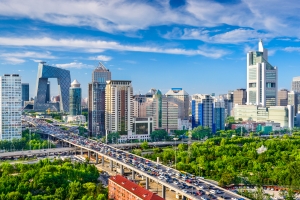