China’s Difficult Balancing Act on the War in Ukraine

By abstaining in votes at the United Nations, and not contradicting the claims from Moscow that China is sticking by its side, Beijing is trying to protect the exclusive relationship it has with its historical ally Russia, without being subject to Western economic sanctions. There is a de facto recognition of Ukraine’s right to defend its territorial sovereignty, but at the same time China admits that Moscow’s worries about NATO enlargement to the East are legitimate. Beijing is also aware that any sanctions imposed on it would have repercussions on global finance, energy, transport, and supply chains, weakening an economy already heavily strained by the pandemic.

“Wuwei wubuwei,” says the principle that summarizes Taoist philosophy: “Do nothing and nothing will remain unaccomplished.” This is how Beijing maintains a difficult balancing act between the positions of Moscow and those of Washington and Brussels; even after the highly-anticipated meeting between the Chinese president and the highest authorities of the European Union (in virtual form, that is), even in the approach state media takes in reporting (or not reporting) on the first terrible images from Bucha.

By abstaining in votes at the United Nations, and not contradicting the claims from Moscow that China is sticking by its side, Beijing is trying to protect the exclusive relationship it has with its historical ally Russia, without being subject to Western economic sanctions or endorsing the instrument of war. There is a de facto recognition of Ukraine’s right to defend its territorial sovereignty, but at the same time China admits that Moscow’s worries about NATO enlargement to the East are legitimate. In practice the goal is to challenge U.S. hegemony without damaging economic relations with the EU, because China is aware that even though a weak Kremlin could become increasingly dependent on the decisions made by Zhongnanhai (the headquarters of the Chinese Communist Party and the government of the People’s Republic), if Vladimir Putin were to be removed from office there would be serious trouble: the resulting economic and political chaos could even affect Xi Jinping, precisely in the year in which he is seeking an uncommon third term. The Chinese president has in fact made a personal bet on the Russian president. When the two met at the start of February on the margins of the opening ceremony of the Winter Olympics to sign a joint declaration of friendship “without limits” between the two countries, they certainly must have discussed the Russian president’s intensions on Ukraine, but it also seems evident that the Chinese president underestimated the military operation that would ensure – whether in good or bad faith is not known. This seems to be demonstrated by the late repatriation of Chinese citizens from the invaded country. Ukraine is in fact an important piece of the Belt and Road Initiative,[1] while Russia is one of China’s principal suppliers of gas, oil, and agricultural products. But there is more.

The People’s Republic is one of the largest importers of food and oil in the world. And we must not forget that it is the world’s second largest economy and the most populous country on earth. It follows that, at an economic level, it is among the countries most exposed to market uncertainties and the rise of raw materials prices; to the point that President Xi Jinping has used these arguments to oppose sanctions on Russia in his meetings with Emmanuel Macron and Olaf Scholz, his French and German counterparts, respectively. “Sanctions will have repercussions on global finance, energy, transport, and supply chains, weakening a global economy already heavily strained by the pandemic. And this,” Xi added, “is in nobody’s interest.” Unfortunately these considerations are not sufficient to make China distance itself from Russia, that as openly confirmed by most Chinese officials and the Foreign Minister Wang Yi, remains “its most important strategic partner.” But it is useful to note that this partnership has intensified above all in recent years, when the Trump and Biden administrations began to more explicitly seek to stem the rise and spheres of influence of the two countries, to the point of openly questioning the Chinese position on Taiwan. As well summarized by the influent commentator Sima Nan, a nationalist who expresses well the ideological positions of Xi Jinping’s China: “We cannot say we are rooting for Russia, but that is certainly our preference, because it is clear that if the West is able to paralyze Russia, the same could happen to China.” Like Putin, Xi Jinping presents himself as the modern emperor who will restore his country’s role as a hegemonic power, that it often had in the course of human history. Like Putin, Xi Jinping does not tolerate any questioning of his role. Like Putin, Xi Jinping is an autocrat. And he is willing to do anything to remain in power. 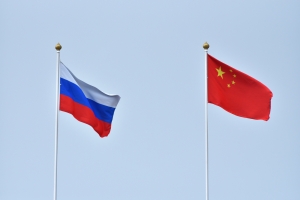