The Stigma of the Menstrual Cycle between Culture and Work/1

The social construction of gender stereotypes is perhaps the main tool of “naturalization” of many of the discriminatory practices that have affected women, and still affect them today, in civil society and the world of work, contributing to constructing and perpetuating a social order characterized by deep asymmetries of power. One of the most historicized stereotypes and taboos is that regarding women’s menstrual cycle. For centuries, superstitions and legends, and even scientific studies, have described menstruation as an invalidating phenomenon for a woman’s life, since it makes her impure and weak, thus justifying her exclusion from education, work or public life, and voting.

This blog will be divided into two parts. In the first, we will present a brief historical excursus on the construction of the stereotype relating to the invaliding power of menstruation. In the second, we will provide context for the historical discourse leading to the recent events in Italy and Spain. This division will allow us to reflect on current events with greater depth, not only celebrating social progress, but also understanding the risks it entails.

To simplify greatly, we can say that starting at the time of Greek antiquity, and until the period of the Enlightenment, the conviction was prevalent that menstrual blood was impure, having negative powers for the physical and cognitive abilities of women and for the physical and social environment with which they came into contact. Religions, for example, established a series of behaviors to follow to not jeopardize the integrity of what women came into contact with during their menstrual cycle: do not touch plants, do not pray,[1] etc.

In ancient gynecology, menstruation was seen as an indicator of the “female disease,” and in the writings of Hippocrates, it was the symptom of the unstable equilibrium of women. For Pliny the Elder,[2] for example, the blood had the power to acidify must, kill beehives, dry out grain, and dim mirrors. Medical studies between the nineteenth and twentieth centuries attempted to scientifically justify women’s inferiority from a physical and cognitive standpoint, appealing precisely to their physiological functioning[3]; especially at the time of the menstrual cycle, women were judged to be emotional and hysterical.

All of these beliefs remained rooted in certain popular superstitions: it was said, for example, that menstruating women prevented bread from rising, made mayonnaise go crazy, or caused anything to mold. Over time, beliefs on menstruation[4] had a very precise social function: to exclude women from school, work, and public life in general, stigmatizing their physical and intellectual abilities. One of the most insidious stigmas regarded the presumed need for absolute rest. Among the most influential supporters of this theory was Henry Maudsley, founder of a well-known psychiatric hospital in the south of London. In an article entitled Sex in Mind and in Education published in 1874,[5] the author wrote that men and women have different minds and bodies: on the one hand, men are “of one body and mind capable of sustained and regular hard labor,” while on the other, women have a “body and mind which for one quarter of each month during the best years of life is more or less sick and unfit for hard work.”

Only starting in 1870, when women began to be admitted to some universities, were studies developed, authored by women, to counter what had been argued in the previous centuries. For example, it was observed[6] that all of the women who worked in factories or in homes as maids could not afford the luxury of resting during menstruation. Studies began to be produced, regarding: the muscular strength of women before and after the menstrual cycle to show that rest was not necessary[7]; the evolution of mental and physical capacity during the menstrual cycle, recording the daily cognitive, perceptive, and motor performance of men and women, without observing any drop in performance due to menstruation[8]; and the exasperated emphasis placed on the debilitating symptoms of the period,[9] more attributable to poor health conditions and the use of corsets than a lack of rest.

In 1930, the British Women’s Medical Federation published the results of a study[10] on six thousand girls reaffirming that menstruation was not a limit on women’s participation in public life and work. In light of these conclusions, the subject was subsequently dismissed; but open discussion of menstruation began only a few years ago. And despite this, still today in Italian we continue to refer to the menstrual cycle using expressions and euphemisms such as “the rules,” “the marquess,” or the more common “my things,” in substance contributing to maintaining silence and stereotypes about a natural phenomenon. So the subject has been formally dismissed, but is still culturally present as a possible stigma towards women.

[1] Examples are found in the Old Testament (“When a woman has her regular flow of blood, the impurity of her monthly period will last seven days, and anyone who touches her will be unclean till evening,” Leviticus 15:19) but also in the Koran.

[3] J. McGrigor Allan, ”On the Real Differences in the Minds of Men and Women,” Journal of the Anthropological Society of London, 7, 1869, pp. cxcv-ccxix.

[6] Elizabeth Garrett Anderson, suffragette and first English female doctor, was the living refutation of the arguments made by Maudsley; see https://it.wikipedia.org/wiki/Elizabeth_Garrett_Anderson. 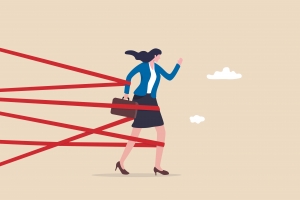